This year the event overall was focused on Cisco’s next generation of networking or Cisco Digital Network Architecture (DNA). As DNA was announced the previous week, there were few announcements at Cisco Live. None in CEO Chuck Robbins keynote, and none from the Collaboration team.

An announcement-free keynote means lots of time for general vision and guests. Chuck Robbins had a big, surprise as a guest – none other than Apple CEO Tim Cook. 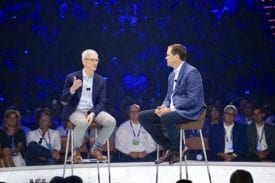 Yes, Tim Cook came on stage for a 13-minute sit-n-chat with Chuck Robbins. That truly is a big deal, and reveals that Cisco and Apple, or at least Chuck and Tim, have a strong relationship. Tim Cook was also in last year’s keynote, but via a pre-recorded video.

Tim is one of the most influential business leaders in America. Last year he earned about $145 million mostly through 1.26 million shares of vested stock. His net worth is somewhere around $400 million. It really says something when someone like this makes time to come to a different company’s event.

This partnership makes sense because it gives Apple more enterprise cred and makes Cisco [more?] cool. Cisco likely has some very powerful insights on how to improve the iOS experience for enterprises. Plus, it’s a competitive coup as it’s very unlikely Tim will ever appear at a Microsoft or Google event. It is a nice partnership, but to date it has not resulted with any exclusive benefits for their mutual customers.

The companies are working together to improve enterprise mobility — for all. That’s the story. The biggest results of the partnership, so far, are now old news: Callkit and Fast Lane.

Callkit allows customers to use the native iPhone dialer for enterprise UC calls. Rumor has it that Cisco actually designed it for Apple and was the first UC company to support it — but not the last. CallKit is now supported by several UC vendors including Microsoft SfB and BroadSoft.

Callkit is kinda sexy, but it’s really a step backwards from a full UC UI. For example, the native dialer doesn’t have a transfer key. It’s also a voice-centric solution (“nice UC solution you have there, too bad it’s voice-only”).

Fast Lane is a networking solution that improves campus roaming and enables prioritized voice traffic on iOS devices. Again, Cisco was first to offer it and combined with Callkit makes a nice iOS-Cisco story. Fast Lane is essentially a set of best practices of 801.11k, 802.11r, and 802.11v. It requires iOS 8 or later and reasonably new (Cisco or other) Wi-Fi equipment.

One could conclude that Android must be hurting as it’s missing out on these exclusive benefits. Not so fast. In the third quarter of 2016, Android managed to capture a record 88% of the global mobile market, Also note that the Apple-Cisco Fast Lane solution prioritizes some iOS traffic, but inadvertently prioritizes all Android traffic. I learned this from a conversation with my friend Michael Finneran. Fast Lane should be called “Slow Lane for [selected] iOS Traffic.”

The Cisco-Apple partnership is far from done, and based on Tim’s live appearance may even be strengthening. Fast Lane is expanding to Macs, and Cisco is also promising improved WebEx experience for iOS users.

There really wasn’t much noteworthy shared in thirteen minutes of conversation. I think the key point was that Tim made time to come.

Tim Cook talked about the importance of easily starting meetings — perhaps that’s why Apple is finally embracing WebRTC in Safari. He implied that Apple and Cisco together can improve security. That was big of him considering last year we saw Apple defy a court order to decrypt an iOS phone, and Cisco admit to a critical security flaw that went undetected for years.

I do like this partnership, and it’s nice to see tech-leaders working together to improve customer experiences. I can’t wait to see how their future efforts will continue to improve mobile collaboration for everyone. Both companies agree on many things – including acronyms like IOS, and the companies also share overlaps on vision and competitors. All is good, but I don’t see Apple ever giving Cisco an exclusive advantage beyond a head start.