Verizon One Talk: UC Mobility Without an App

Verizon One Talk: UC Mobility Without an App Verizon One Talk is a new service that utilizes a single, native phone number across mobile and fixed and devices.

Verizon One Talk is a new service that utilizes a single, native phone number across mobile and fixed and devices.

For the past couple of decades enterprise communications has involved an odd pairing of mobile and fixed communications components. Both have undergone radical technical changes, but have predominantly remained separate. Verizon has merged the two together in a new way with its One Talk service.

Mobile phones have evolved from flip phones through BlackBerrys to the modern iOS and Android smartphones. Concurrently, network improvements have brought expanded coverage with increased speeds. A mobile phone is often a user’s primary or preferred endpoint.

Fixed UC components have changed as well, though these changes are less apparent to end users. The modern IP phone shares little in common with its telephone ancestors, yet looks and works in similar ways. Enterprise UC systems support modern features such as single sign-on (SSO), integration with business applications, and software clients.

Fixed and mobile solutions usually meet with broadly functioned UC mobile apps for smartphones, and as employees increasingly use their smartphone’s in the office, many question if there is still a need for two systems.

Mobility has emerged as a common UC requirement, but unfortunately the mobile-app idea is better in theory than practice. My colleague Michael Finneran, president of dBrn Associates, has shared information that consistently shows very low adoption and usage rates of UC mobile clients.

Mobile UC apps are second-class citizens on smartphones, which already provide similar functionality natively. Smartphones are quite capable of making and receiving calls, and do so over a voice-optimized channel. UC apps tend to use the wireless data channel, which is less prevalent, lower quality (for voice), and consumes more battery.

The smartphone also offers seamless integration across its system. For example, dialing a phone number received in an SMS or email is usually just a single touch with the native dialer. Conversely, third-party UC apps tend to be more cumbersome; the user may have to open, navigate, and dial in separate actions.

The next generation needs more integration between mobile and fixed, and Verizon has submitted its One Talk service as an option for the mobile enterprise. Here, the smartphone and the desk phone share a single identity. This is different than the more popular approach through which devices use separate numbers, but create the illusion of a single number with call forwarding or simultaneous ring.

With the One Talk service from Verizon, the mobile and the desktop phone share a single (mobile) number. The service offers one set of features and logs, from one vendor under one invoice. Verizon also offers the fixed and mobile devices and wired and wireless network services.

Verizon positions One Talk for small business customers with fewer than 100 employees, and finds the strongest traction in companies with 20 or fewer employees. This is likely due to One Talk’s limited feature set. For example, One Talk does not support contact center services and SSO at this time. Verizon offers a Cisco HCS-powered UCaaS service for its larger, enterprise customers. Only One Talk uses the same native number for mobile and desktop devices.

Business customers first determine how many phone numbers they need, and then assign those numbers to devices — be they desktop phones, software client endpoints, or smartphones. Additional business services such as unified messaging, auto attendants, and hunt groups are available. The service includes SMS integration to the desktop client, so all users are capable of sending and receiving text messages. 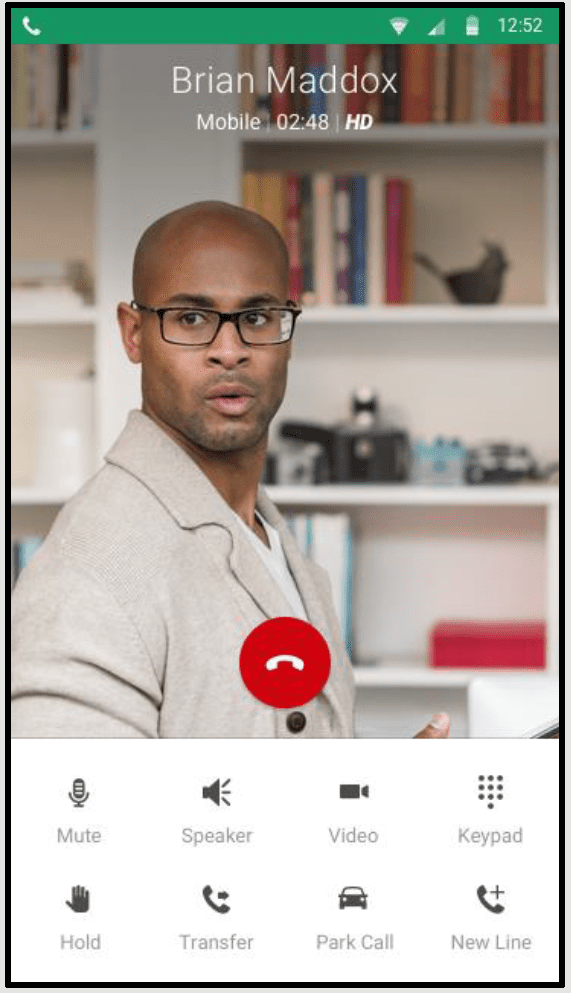 Verizon One Talk works on iOS and Android smartphones. On Android, Verizon enhances the native dialer with added business features: hold, park, transfer, and video. For BYOD users who want to maintain distinct personal and professional numbers on their mobile devices, Verizon supports a traditional mobile UC One Talk app. Verizon providers desktop users with a One Talk desktop app and/or a Yealink IP endpoint preconfigured for simplified provisioning.

Verizon isn’t the first mobile carrier to offer a one-number service, but it is the first in the U.S. market to do so. It isn’t being shy about it either. Verizon is promoting One Talk through 1,800 B2B sales reps, 1,600 retail stores, 300 SMB-focused stores, and 2,400 agents — all supported by a national advertising campaign. Verizon claims it signed on more than 1,000 business organizations in its first 10 days of offering One Talk.

Mobile phones configured with One Talk are best suited for corporate owned/managed endpoints. Those that value the ability to turn off work calls while remaining reachable by friends and family (two numbers) are better suited with the add-on app.

The vision of tighter integration between mobile and fixed services is shared among several carriers and vendors. BroadSoft and Mitel are working to provide these capabilities within the cellular network. Tango Networks offers an enterprise-based approach. Several MVNO providers have created invoice-based integration. Some providers customize the Android dialer on the smartphone. For example, UCaaS provider Dialpad modifies the way the dialer places calls on its network. Apple’s newly released APIs allow the dialer to work with apps from Cisco, Vonage, and others more seamlessly.

Verizon isn’t sharing much about the underlying technology that powers One Talk other than that it leverages its existing platforms with internally developed integrations.

If this model emerges as a trend, it will hurt several UC/UCaaS vendors. The current installed-app approach is implemented on a vendor-neutral level playing field. With One Talk, the UC/UCaaS vendors are excluded from the conversation. The integration takes place within the wireless network, and sales and support go through the provider’s channels.

Most wireless carriers today support voice with 3G cellular even when the data path is LTE. This is why there are usually separate plans and quality of service levels for voice and data. All-LTE environments could re-level the playing field. This transition is expected to be similar to the TDM-to-VoIP transition that has been occurring in businesses over the past 10 years. The model used with One Talk will still live in an all-LTE environment, but third parties should be able to add services as well.

The current virtual “one-number” approach isn’t particularly effective, and it’s time for a change. Evidently we have entered a new era of mobility in which wireless carriers support business-class features on the native dialer. It is inevitable now that carriers, providers, and software vendors will be prioritizing fixed and mobile services that are more intertwined.