Let’s Have the Next Meeting on Facebook What would a full-out Facebook commitment to enterprise communications and collaboration mean for the emerging messaging app market?

What would a full-out Facebook commitment to enterprise communications and collaboration mean for the emerging messaging app market?

I’ve previously written about Facebook at Work. This is an implementation of Facebook optimized for workplace collaboration and communication. It uses separate credentials and sports a slightly different look, but maintains a similar look and feel to its popular, consumer-oriented service. This can equate to little or no required user training. 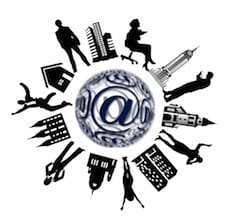 Facebook at Work is not widely available, so it is difficult to ascertain Facebook’s enterprise intentions. It’s similar to the situation at Google, as both are predominantly advertising companies. Although the technology fit for the enterprise is strong, the business model isn’t compatible. Google’s Gmail suite, for example, comprises advertising-based consumer services, but the ad-free Google for Work is fee-based. Facebook and Google each appear to be dabbling in enterprise solutions without indicating a long-term commitment.

Enterprise communications and collaboration clearly are moving toward messaging and social models found in consumer apps. Services such as Slack, Atlassian HipChat, and Cisco Spark promote sharing and collaboration using many of the tools and UI elements found in consumer social services. The intersection involves messaging, content sharing, and video.

Broadcasting the Message
“Video broadcasting, or livestreaming, is a relatively new concept. The functionality is stable, but the market isn’t. For example, livestream pioneer Meerkat shut-down in March, reportedly in part due to competitive pressures from larger social networks. And last month brought the discontinuation of two more once-popular video services: Twiller’s Blab and Google’s Hangouts On Air. All of these services lived at the intersection of video conferencing and social media. Facebook is poised well in this emerging space.

The Blab folks said they intend to relaunch with less emphasis on broadcasting and will instead focus on becoming an always-on destination for hanging out with friends. Although the number of Blab users grew to 3.9 million in less than a year, most didn’t find the livestreams interesting enough to stop what they were doing and watch them, creators wrote in the service’s autopsy. For its part, Google is taking similar steps by removing the broadcast element from its Hangouts service or, more accurately, positioning YouTube Live as its broadcasting brand.

We can assume business services will continue to become more consumer-like, making collaboration more social. Broadcasting meetings is an efficient and effective form of communication and also lends itself well to e-learning. Microsoft has expanded its meeting broadcast service, and Zoom, too, is using broadcast to expand its e-learning services.

As consumer-oriented video broadcasting is aligning around Facebook and Google’s YouTube Live, we can expect the same sort of video/social/collaboration merger in the enterprise. This is exactly what Cisco is doing with Spark. It intends to align its video room systems, UC platforms, and WebEx with Spark as a platform-ready messaging service. Also, Microsoft’s meeting broadcast feature aligns with Office 365, which includes Yammer, Exchange, and Skype for Business.

One to Watch
Other players include Zoom, GoToMeeting, and Atlassian, as well as many UC companies, including Mitel, RingCentral, and Avaya. However, Facebook is the one to watch. It lurks in the enterprise periphery with Facebook at Work, WhatsApp, and Facebook Messenger, with its primary namesake app already found on many business desktops and mobile devices, as well. Facebook has expertise in much of what the enterprise vendors struggle with, including: cloud, social, messaging, content sharing, global coverage, and video.

Facebook made news last week when it announced WhatsApp and the Facebook app will begin sharing user data. To date, WhatsApp, the billion-plus use consumer-oriented messaging service has been ad-free. Facebook is making changes to WhatsApp, as well as Facebook Messenger, intended to enable targeted advertising.

That’s both unsurprising and good news for enterprise-oriented providers as it is consistent with Facebook’s mission as a global advertising company. Enterprise-oriented services aren’t an easy transition as they create conflicts in R&D and elsewhere, but such flips are certainly possible. CBS, for example, has recently announced commercial-free online access to its original content, for a fee.

The idea that has many UC vendors on edge is that Facebook might decide to actively pursue enterprise collaboration and communications. Keep in mind that many of the new workstream messaging applications are casually described as “Facebook for the office.” Should this occur, which of these companies will be the next Meerkat or Blab?

Video is already normalized among the user base and has business benefits in customer service.