I attended the recent Huawei Analyst event in China in April, and learned there is more to UC than we see in the US. It turns out there is a giant firm out there that is doing just fine in just about every market but the US. 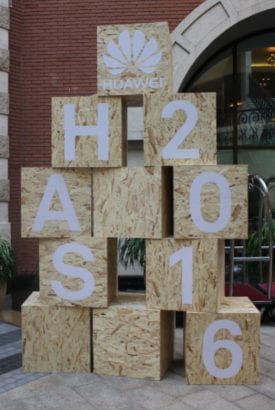 I've run into Huawei a few times before, but this was the first time I've made the journey to learn more about the company. I was blown away. Huawei is experiencing double digit growth, has an extensive and mature portfolio, and a whole lot to say and share with analysts.

At +$60B USD in revenue Huawei is bigger than Cisco, but not quite as big as Microsoft. Most of its revenue comes from EMEA markets. It offers IT and networking gear to carriers, enterprises, and consumers.

Cisco tried the consumer space with Linksys and Flip, but decided that was a bad idea. For Huawei its breadth and reach is part of its strength.

Huawei got chased out of the US market in 2013 due to fears of company spying. It was even restricted from selling to US carriers. Americans were a bit distrustful of Chinese companies, but things have changed. First, Snowden revealed that spying was occurring in unexpected ways from our own government. Secondly, we American's have learned to trust and even admire many Chinese companies including Starwood Hotels, GE Appliances, FoxConn (the makers of the iPhone), and even Volvo.

Meanwhile Huawei has grown significantly. It produces carrier equipment (wired and wireless), enterprise networking, UC, video, and smartphones. It is expanding into IoT and analytics too.

It was good to learn more about their solutions. I suspect their aggressive growth will continue, and I would not be surprised if they returned to the US UC market in the next few years.

To learn more about Huawei, download this free 2Pager.