Why Are You Surprised AT&T and Verizon are Spies?

Are you one of those people who is surprised that AT&T and Verizon spy on you and provide your calling details to the NSA and government, even without a search warrant?

You shouldn’t be surprised. They have been integrated into the nation’s military establishment since World War II.

Every nuclear warhead ever designed was designed by AT&T and Verizon, at Sandia National Laboratories, a subsidiary not of the government, but of the phone company. The manufacture and save handling was overseen by AT&T, not some military contractor.

Missile systems such as Safeguard and Nike were developed by AT&T and Verizon. In fact, AT&T’s Western Electric subsidiary was the prime contractor of these missile programs.

We all know how expensive long-distance calling was in the 1960s and 1970s, before competition. It wasn’t expensive because of a lethargic monopoly. It was expensive because long distance money was being used to build warheads and nuclear missiles. This was a convenient way to bypass Congress. AT&T agreed to fund these programs “as a service to our country” but in reality it was an arrangement so that Congress didn’t approve or fund much of these programs.

The United States has been a signatory to treaties prohibiting biological weapons from being designed and stockpiled by the government. But those treaties carefully sidestep that AT&T, through Western Electric at its Boulder Colorado facility owned the world’s largest biochemical warfare stockpile in the world. Nothing prevented a private company from owning such a thing…for its own protection, of course.

Much of the Vietnam War was funded by a direct tax on telephone service.

AT&T and Verizon were intimately involved with plans to quarantine any segment of the population, should a domestic uprising occur. All phone systems were carefully designed to be able to sectionalize cities or regions to prevent any communications in or out…for our protection.

So why are you surprised? This is nothing new. AT&T and Verizon are deeply integrated into our military establishment. Of course they are spying on you.

Is this legal? Of course it is.

The law says that the government needs a search warrant to eavesdrop on you and to invade your privacy by disclosing your text messages and calls. But the law does not apply to private corporations. This data is on their network, they own a copy of it. They are free to sell or give it to the government. You see, if the corporation does this voluntarily then it is not the government illegally invading your privacy.

So folks, get a realistic grip here. This is nothing new. Protecting your freedom has always meant giving up and entrusting that freedom to the government.

So far it has worked out pretty good. The US is still the wealthiest country (at least until early next year when China will surpass us) and we still dictate world policy (except perhaps for much of Asia which is increasingly ignoring us.)

But I am still always surprised when people are surprised that AT&T and Verizon spy on you and cooperate with the military. They always have.

The substantial stockpile of atom bombs we and the top military assumed was there, in readiness, did not exist. Furthermore, the production facili- ties that might enable us to produce quantities of atomic bombs so engi- neered that they would not continue to require a Ph.D. in physics to handle them in the field, likewise did not exist. No quantity production of these weapons was possible under the existing “handicraft” setup. To redesign the bomb so it would be a genuine field weapon, to carry forward fundamental work on new designs, to design and build a plant in which this infinitely complex thing could be put into quantity industrial- type production, and then to operate such a factory required talents in an unusual and remarkable combination. First of all, this task required industrial experience. What we wanted was not something that could be done in a laboratory alone, but in a production center, with factory techniques, factory mechanics (of a high order of skill, it is true) and factory management, Second, what we wanted done required men of high order of ability in scientific fundamentals, equal to any in the universities but also experienced in dealing with industrial problems and with industrial associates. Third, this task called for a special kind of operating experience in dealing with the technical characteristics of systems used in these weapons, and others then actively under development, new weapons which have since been proof-tested. Most important of all, these three capabilities of research, industrial techniques and operation had to be combined in the same team, with experience in working together as a unit. To go out and create such an organization was out of the question. There was not time. It was our “hunch” that there was such an organization in existence-the Bell System, that is, the team consisting of the American Telephone & Tele- graph Company and its associated operating companies, together with the Bell Laboratories, a research and development institution, and Western Electric, the manufacturing arm of the system.  A careful analysis confirmed this initial “hunch.” I spent Decoration Day of 1949 with the president of AT&T, the late Leroy Wilson. On behalf of President Truman and the Atomic Energy Commission, I requested that AT&T, Bell Laboratories and Western Electric, as a team, take the heavy responsibility which I have here summarized. Mr. Wilson said that his company was already committed to important defense work, and while it did not relish another great load such as this, the Bell System would accept the assignment as in the national interest.
Credit: David E. Lilienthal (New York: Harper, 1952), pp. 101-103 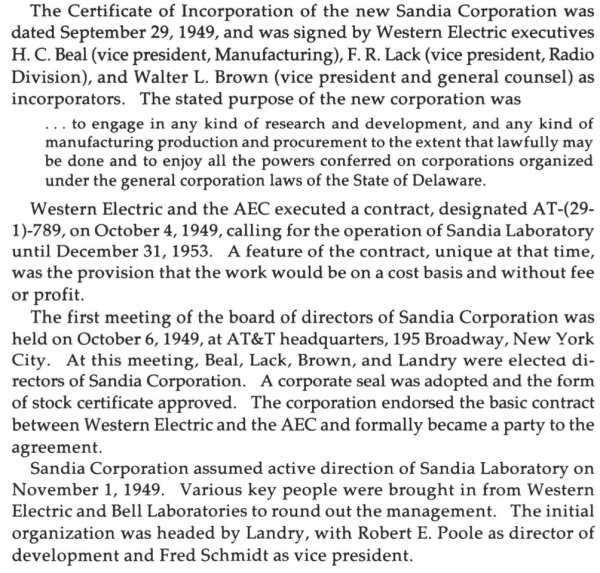 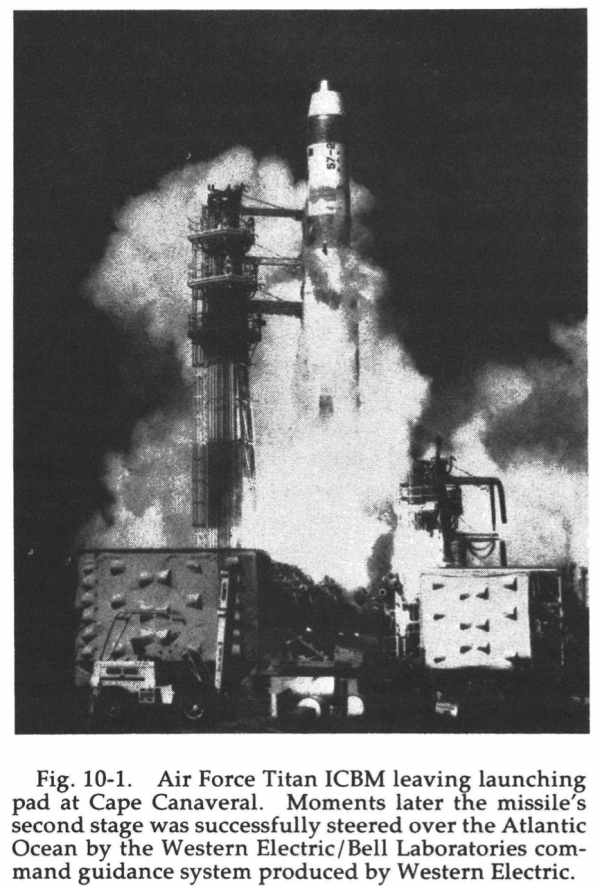