US News agencies are sooo excited about 5G. I can’t figure out why. What is so great about 5G and who cares?

The most common reason I hear is the amazing speeds possible with 5G service. The US consumer is being groomed to think that the reason their cellular service is so slow is because they are on aging LTE service ( just like they were taught that the problem was aging 3G service.)

Let me share with you some truth: 4G will meet your needs just fine. In Asia I regularly get speeds of 140~160 megabits per second on my cell phone. This screenshot to the right is quite ordinary. 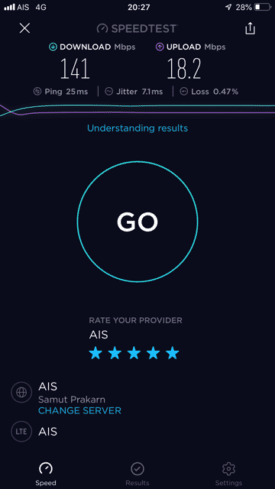 My Asian carrier doesn’t compress my video quality, they don’t have a “fair use” speed throttling policy, And, speeds such as this are as available in large cities as it is in rural villages that may not even have power.

In the US, the carrier philosophy is to build massive, expensive to expensive towers that are spaced 1~10 miles apart. These hideously expensive towers are then overloaded, and frequently don’t have enough backhaul capacity. They serve giant swaths of area, and because they serve so many phones they have a high overhead (polling and doing general overhead with each of them.)

In Asia, towers are deployed frequently and liberally. The tower packages are simple, and are pre-kitted. Towers are seemingly on top of every building. You can see the equipment boxes and standard antenna arrangements everywhere.

And, possibly even more importantly, micro-towers are used a lot. They work like this: A local store or shop is offered free internet in exchange for the carrier mounting a 12” square box in their window. This box is a mini-cell tower that perhaps covers a few blocks. So there are towers everywhere, and they are cheap to install and cheap to maintain. The carriers literally pay nothing for the space rental for most of their mini-towers while US carriers will commonly pay $1,500 to $3,000 a month for a cell site.

The screenshot above is from my service in Thailand

It is glorious tethering my laptop to my iPhone in Thailand. On the road I can watch movies (without the compression US carriers inflict upon their customers.)

I pay $6 a month for telephone service with slow internet (2G speed) and then upgrade to “Full Speed” for an additional $12 a month. I have a data cap of 20 Gigabytes during the month. (I can buy additional gigabytes for about $1 per gig as needed.)

So, for under $20 a month I have cellular service speeds that are faster than most US home broadband service.

When I am out of the country AIS has a very simple and fair deal, too: As long as I promise to use at least $45 a year in service they will keep my SIM active for up to a year with no monthly charge at all. So my SIM and number await me every time I return.

Why can’t business be so straightforward in the US?

And, who needs 5G when they can get 4G at these speeds?