Mitel will soon seal the deal on its acquisition of ShoreTel. Many people I know felt this outcome was inevitable. After all, ShoreTel indicated it was for sale and Mitel likes to acquire companies and previously made an offer. 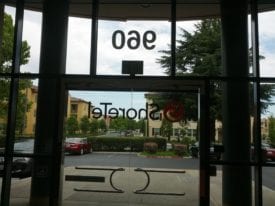 However, this outcome wasn’t so obvious ten years ago. If a soothsayer had predicted the two companies would be one, not everyone would have assumed Mitel would be the acquirer. So what changed?

ShoreTel was once the little company that could. When VoIP was new, the PBX vendors took their time to 1) accept and 2) adapt, and as a rule they over-complicated things. Without the baggage of dealers, products, and features; ShoreTel created a simple appliance that made VoIP easy to sell, install, and maintain.

ShoreTel thrived on being a different type of company. It chose bright orange as its corporate color, and designed odd-looking phones. But, over the years ShoreTel got more complex while the competition got simpler.

Who’s to blame? The list of suspects is long: CEOs, boards, the economy, competitors, and luck (or lack of) to name a few. While Joos certainly played a part, he wasn’t exactly dealt a winning hand.

It was the last three CEOs that cast ShoreTel’s fate.

John Combs was ShoreTel CEO 2004-2010 – the glory years. During his period the company experienced some spectacular growth, and the major vendors took notice. Ironically, prior to ShoreTel, Combs worked at Mitel.

Despite this success, John made (at least) two critical mistakes. First, he decided to go public. That was the game plan back then, but from what I understand the board didn’t really want it, so a new board was put together. After the IPO, Combs discovered that being public sucked.

The bigger mistake was poor succession planning. He hung around until a replacement was found, but that wasn’t enough. There’s a lot to be said for internal succession planning. ShoreTel had excellent energy, passion, and momentum, and that’s all up for grabs when you hire leadership externally.

I know hindsight is 20/20, but we can now definitively say another mistake was not launching a cloud initiative. That wasn’t so clear at the time, but I’ve heard Combs wanted to do it.

Little ShoreTel hired its next CEO from big HP. In a word: disastrous. My feeling was Blackmore wanted out the day he started. However, I do give credit to Blackmore for the acquisition of M5. That had the potential to be a great move. It wasn’t.

M5 was a rising UCaaS provider with its own technology and above average revenue per subscriber. M5 had solid momentum in New York. The acquisition was pitched as visionary and transitionary, but it was probably about prepping the company for sale. ShoreTel paid a lot for M5 which was later relaunched as ShoreTel Sky. The service got hit hard by Hurricane Sandy (mental note: don’t assume cloud providers are prepared for disaster).

The integration was botched, and ShoreTel became two companies on two coasts that hated each other. It was likely one of the worst acquisition executions in telecom (and that says a lot). Note, M5 was rated as a Visionary in Gartner’s 2011 UCaaS Magic Quadrant. There were no Leaders that year, and Mitel, RingCentral, and Vonage weren’t even in the report. ShoreTel was completely dropped from this Magic Quadrant report a few years ago.

Blackmore offended customers and employees. He lost the confidence of his leadership team as evidenced during the first part of 2013 when six executives resigned (Mark Arman, Tim Gaines, Ava Hahn, Joe Vitalone, Dan Hoffman, and Kevin Gavin). Coincidentally, both Gaines and Vitalone went to Mitel but have since left. Blackmore himself made the seventh executive resignation that year.

This time ShoreTel did promote from within when it named Don Joos its next and last CEO in 2013.

Evidently, Joos didn’t like anything that ShoreTel sold, so he put a plan together to replace the entire portfolio. It would be a great story if it had been successful.

The transition took about four years which is an extraordinary engineering achievement. ShoreTel Connect arrived a little behind schedule and way behind the market. While ShoreTel built Connect, Cisco launched Spark and Twilio had its IPO. Two sectors Joos would soon be chasing with an empty wallet.

If Combs had pulled off Connect in 2010, ShoreTel might be acquiring Mitel (or at least Toshiba).

In 2015 ShoreTel presented me a preview of a Team Chat application in development. It was very impressive, but turned out to be only slideware. When it was eventually released as Teamwork, it was unrecognizable to the slides I saw. I wonder how things would be different if they actually developed what they showed me.

Simple is as simple does. After the announcement of the acquisition, Mitel CEO Rich McBee stated that one of the things he liked about ShoreTel was its commitment to simplicity – he even recited one of the best known taglines in the industry: “Brilliantly Simple.”

McBee was referring to a different ShoreTel. The current ShoreTel no longer uses that tagline and for good reason. At the last ShoreTel partner event, featuring Connect, “brilliantly Simple” was completely absent. I noted that all the banners, signage, and shirts said “Interact” or “ShoreTel One.”

I will miss ShoreTel.