I’ve been getting questions about Jasper – what is it? That’s easy: a Jasper is an aggregate of microquartz and/or chalcedony. Also, it is an independent IoT firm that will soon be part of Cisco. As far as I can tell, the quartz thing has nothing to do with the IoT thing…but time will tell.

Jasper provides IoT networking services – it was founded in 2004 back when IOT stood for Involuntary Outpatient Treatment. It is a networking company that has no networks of its own. It facilitates and simplifies IoT connectivity by connecting ‘things’ via a global network of partner alliances. It has relationships with about 30 mobile groups which results with about 100 carrier partnerships. The problem with ‘things’ is they are everywhere – which is inherently incompatible with our geo-political concept of connectivity.

Many consumer IoT devices, like Nest thermostats, utilize the customer’s Wi-Fi which effectively delegates networking. This is not acceptable for manufacturers that require more control and more coverage. By establishing a single relationship with Jasper, manufacturers of ‘things’ can resolve global connectivity. It’s not just cellular either – Jasper also offers Wi-Fi, analytics, and a robust customer dashboard for management and visibility.

Jasper is based in Santa Clara, California. Its founder and CEO, Jahangir Mohammed, is expected to run a new IoT Software Business unit at Cisco when the acquisition completes. This unit will report to Rowan Trollope who still contends that IoT and UCC are separate businesses (for now). Jasper reported $67.1 million in revenue in 2014, up 413% thanks to customers such as Amazon, GE, Starbucks, and most of the car makers…to name a few.

Jasper is having a busy month. In addition to announcing its acquisition intent with Cisco, Jasper is making several announcements at Mobile World Congress.

The growth of IoT is about new applications and benefits associated with distributed data and sensors. There will be sensors on millions of devices, so one might conclude it is all about the sensors though that will likely just be a commodity business. Since uncollected data is useless, the financial opportunity really lies in the network. Network services (plus APIs?) is what presumably ‘sparked’ Cisco’s interest, and you can bet Rowan has a Tropo/Jasper angle in the works.

The fact is IoT and UCC are indeed headed for overlap. It’s already begun. Think of how OnStar promises to call you if an airbag goes off – that’s just one example. The Contact Center is queued for the most change. Not counting hold-time I spend most of my time with contact centers validating myself – and it’s ridiculous what they will accept as proof. How much longer until they only accept a finger print or that I’m calling from within an approved geo-fence? The majority of “calls” into a contact center will soon be ‘things’ not people. The UC industry has been promising more contextual awareness for a decade now, but it’s going to take a few ‘things’ to make this really work. There’s a perfect storm on the horizon that includes APIs, speech recognition, AI, location awareness, and a multitude of sensors that is going to change how, when, and why we communicate.

Rowan isn’t the only UC exec being tapped for IoT. Jasper hired Martyn Etherington last year. Etherington was the CMO at Mitel for several years, and he significantly upped Mitel’s digital and social visibility as well as a successful (re) brand launch. 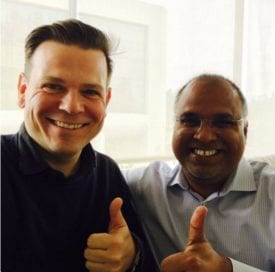 Jasper isn’t alone in this space. There’s other IoT networking specialists such as Kore and Numerex. There’s also an emerging category of generalist IoT providers such as Ayla Networks, PTC’s ThingWorx, and Xively. The only other UC company that is making IoT noise that I’m aware of is NEC which is approaching it from a big data and analytics perspective.