Dreamforce 2021 was the first Dreamforce that featured Slack as a part of Salesforce.

The Salesforce-Slack acquisition had only closed about three months before Dreamforce, so I was impressed how predominantly Slack was positioned throughout the event. Slack was presented in two different ways: Digital HQ and Customer Engagement. In this post I discuss the Digital HQ concept.

Digital HQ is quite simply brilliant. It’s a new term, but the concept is core to Slack and Workstream Collaboration. Digital HQ is the better term. First, anything with the word digital gets attention (which I don’t really understand). Remember how we replaced analog phones with digital phones in the 80s? Digital phones are legacy today, but the term digital is somehow new again.

HQ is even better. Headquarters is where the action is. Digital HQ captures  workstream collaboration, hybrid offices, and digital transformation in one simple, intuitive term.

There was a keynote session where Stewart Butterfield presents the notion of a Digital HQ. This session, in fact most of the Slack sessions at Dreamforce, were presented as if the audience had no prior exposure to Slack. Why? Because this was Dreamforce, not Slack Frontiers. I would assume the majority of Dreamforce attendees had no prior exposure to Slack. In Stewart’s keynote, it spends about 10 minutes explaining both Slack and Digital HQ very effectively.

Below, I’ve selected some key quotes from Stewart and added some commentary. The Dreamforce team has not posted this particular keynote on YouTube. 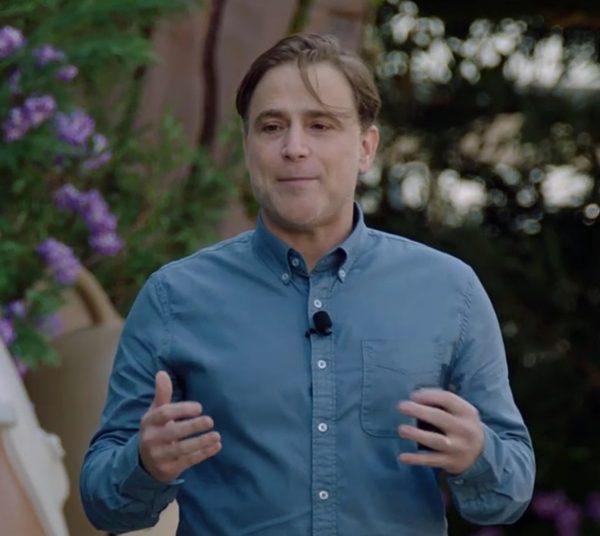 When you see an organization outperforming and leading its category, chances are very good, you’re looking at a Slack customer: A bold statement implying cause (use Slack) and effect (outperform). There’s probably some truth to the claim, but it’s more likely a result of a general commitment to digital transformation than Slack itself.

More than 1 trillion messages have been sent in Slack. There are more messages sent every day in Slack than there are tweets on Twitter. In fact, at peak times in a single second, we deliver 300,000 messages: It’s an interesting and impressive statistic. Slack stopped sharing MAU a few years ago after MS Teams passed Slack in users. There’s no value in competing with MS on users (or messages), but these figures effectively give an air of credibility to Slack. I would have guessed that Twitter was processing more messages.

Slack is different from the messaging apps that you use all the time in your normal life. The WhatsApp, iMessages, Facebook Messenger app, and the Android Messages app, Line, WeChat, good old SMS. And there are two important differences, channels and platform: Here Stewart is making it clear that Slack is more than chat. He calls out several consumer apps by name. The real competition comes from business apps such as Teams, Webex, and a few other messaging apps. The main point is that Slack is more than chat.

Channels are a way of organizing conversations: It is shocking to me how many people don’t get this concept. The simple test is if the same five people can be in separate channels. In simple chat apps, the same five people are limited to one “channel” for all topics they wish to discuss. The key to Slack or team messaging in general, is that you can organize channels (rooms, spaces, or groups) into categories. The same five people might have three channels for different topics. This is extremely important for several reasons. For example, compared to email, Channels are self organizing. Also, channels are the same for all users. Unlike inboxes, with the channel everyone’s looking at exactly the same thing, not their own isolated and incomplete version.

Slack integrates with everything. That’s the platform. And it’s not just the 2500 third-party party apps in our app directory. It’s the ease and simplicity of integrating internal systems and tools: This is effectively demonstrated in the keynote. The (internal and external) people, apps, and data are all accessible in Slack. It becomes the portal to (team) work. That was the notion of workstream collaboration.

Communication is the most fundamental thing we do as human beings and underlies everything: This seems obvious, but it’s rarely said by communications companies. UCaaS companies are too focused on meetings, calling, and hybrid working. The reason we have meetings is not to meet, but to communicate, collaborate, and align. Outcome focused messaging. During the pandemic, communications got harder, and we all realized how important informal communications (elevators, water coolers, cafeterias, etc.) are. We have to solve for more than meetings.

If you would have asked me in February 2020, whether the entire company can make a switch to working from home all at once, and be able to perform at the same level: I would have said it was impossible. But it turned out that it was possible: It’s an observation shared by many of us  at nearly every level, but Stewart punches it up with this closer: When you find yourself doing something that you thought was impossible, you have to ask yourself what else is possible? We need to re-think what we were doing, beyond where we were doing it. Why is Slack processing 300K messages at peak times? Because it’s an effective form of communication.

[During the pandemic] Slack was our HQ. We had one place where work happens, one place where everyone could be reached, one place that brought together all the people and all the tools that we used every day. And that’s what we mean by a Digital HQ. Finally! We have arrived at the finish. Sending employees home exposed a lot of weaknesses in organizational communications. Stewart highlights the value of extending digital transformation from processes to places. Specifically, the office. Stewart (and Salesforce) skipped the hybrid office discussion entirely. Location isn’t the issue. What matters is communications and alignment.

It turns out that Digital HQs are a lot easier to renovate than physical ones: Unsure what he is referring to, but it’s a great sound bite.

I have never been a fan of the hybrid office conversation that so many UCaaS companies are currently obsessed with. Of course people will be working from home and at the office. The ratios and attitudes are changing, but teleworking and distributed work are not new concepts. We learned during the pandemic that remote/distributed teams can be more effective and desirable than many previously realized. There are certainly going to be some long term impacts regarding norms, expectations, and equipment, but so what? These things are always changing.

We keep saying that work is not a place, yet the whole hybrid conversation is focused on place (even places). There are some interesting aspects to how we reimagine our workspaces, but the real post-pandemic issue is how to reimagine communications in a more distributed world. The benefit is alignment. Stewart makes a compelling case for using Slack as a Digital HQ.

Ironically, Salesforce just built the tallest most expensive office building in San Francisco. That was when places mattered. Stewart (and Marc) didn’t address Salesforce Tower, WFH, or any of Salesforce’s offices because location doesn’t matter any more. It’s not that we need Slack (or other solution) because we might work in multiple places, we need Slack (or other solution) because location is irrelevant to how we now work.

That’s all for this post. As I noted above, they positioned Slack in two ways: Digital HQ and as an engagement solution for Customer 360. More on that second point in a separate post.