What is With All the Scanning?

Anyone who follows my tweets knows I read a lot of online news. Several unrelated tidbits suggests barcodes are an important and increasing part of our lives. Yes, barcodes – I’m serious.

The barcode was born in the 40s, but didn’t take off until the supermarkets adopted the UPC in the 70s. The technology is everywhere today – well beyond retail. So what is this obsolete technology doing in my telecom blog? Lucy, let me esplain in four recent news events.

Mobile Barcode Scanning up 700% this Year. This bit of news basically says that people love scanning barcodes on their mobile phones. I don’t put much into the 700% because I think mobile phones are up 700% too, but there are a few tidbits in the post I found very interesting.

ShopSavvy, BarcodeHero, Stickybits, CheckPoints, Tecca, Microsoft Tag,RedLaser, SnapTell, Shopkick, the recently updated Amazon Mobile – if you’re like many smartphone owners, you’ve used at least one (if not more) of these mobile barcode scanning applications. In fact, you’re now part of a growing trend of users who do. 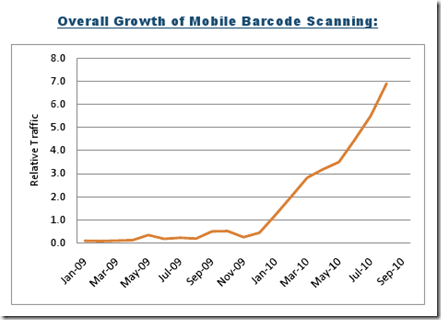 Sure, I’ve scanned a few items here and there with my phone, but it is painfully slow process. However, this is not the first bit of evidence that I am impatient. Seems the notion of equipping the masses with a barcode scanner has some teeth to it. You can learn a few things with a network and a barcode scanner. Price check on a can of peas? thin line, thick, thick, thin, thick…

Bit.ly Now Lets You Add QR Codes to Links in Seconds. A QR code is a 2D barcode. Ironically, I put one on my business card – it makes adding my contact

information to a smartphone pretty simple.

The popular link shortening service Bit.ly (which has billions of clicks on its links per month) has just announced that it will allow users to shorten links and automatically turn those links in to QR codes which will lead back to the original link. This is a fantastic use of technology and I can already see tons of uses for this and it really shows that QR codes are going to become more and more popular and widely embraced. All you have to do to add a QR code to your URL is change the end of the bit.ly link to .qr and it generates a QR code automatically.

I use bit.ly regularly. I also use QR codes regularly with my smartphone – some of the smartphone app review websites use these codes to provide a simple type-free download link. The key point here is that one of the most popular services on the Internet is now integrating barcodes into its core service. We aren’t talking about some off the beaten path esoteric website no one has ever heard of.

Confessions of a Used Book Salesman. I thought this was a very interesting piece about the “profession” of shopping for used used books. Book hustlers visit book stores and library sales and bid low and sell high with the help of bar code scanners. One might think retailers love these guys as they can become very good customers, but one would be wrong. They make a buck by being smarter than retailers and robbing them of their jewels.

It feels like being God in his own tiny recreational casino; my judgments are sure and simple, and I always win because I have foreknowledge of all bad bets. The software I use tells me the going price, on Amazon Marketplace, of the title I just scanned, along with the all-important sales rank, so I know the book’s prospects immediately. I turn a profit every time.

As I read this piece, I had thoughts of becoming a book scanner myself – maybe starting in my own library. After all, I am among the 700% in mobile phone scanner equipped users (see News Item One above). But then the book scanner spoke directly to me:

Anyone with a smartphone can scan barcodes on books, but these people aren’t the competition, exactly. Smartphone scanner applications, which interpret photographic images of barcodes and then look up the corresponding products on the Web, work too slowly to be tools for the professional. With the PDA and laser scanner, I work at the speed of the retail cashier.

After-all, if you are going to bank on obsolete technologies like barcodes, perhaps an obsolete PDA is the perfect companion. Sarcasm aside, we generally understand that barcode scanners at the supermarket are a bit better and faster than scanners on our phones – but why? Because smartphone scanners are not scanner, but cameras. They take a photo of the barcode and use software to convert the image into a code it can lookup – a relatively slow process. It would be painful checking out at the supermarket with a cell phone as a scanner.

Recap: Barcodes are increasing in use and popularity and that smartphones are painful way to capture barcode information. And that brings me to the next bit of news… 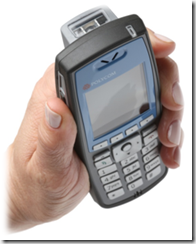 Polycom announced its new 8400 series of Spectralink voice over WiFi phones that include an integrated barcode scanner. The first, to my knowledge commercial phone/scanner combination. The Polycom SpectraLink 8400 series delivers expanded capabilities through the combined power of two-way radios, pagers, barcode scanners, intercoms, and high-quality conferencing in a single device.

If you work mostly with things (rather than ideas) barcodes are likely already in your workplace. Retail, manufacturing, and healthcare are all benefitting from barcodes and mobility. This device brings it all together – a SIP phone, improved XML browser, and scanner.

It is interesting how these spaces are converging. Motorola for example makes scanners and wireless technologies, but other than its consumer focused cell phones, it does not make SIP phones. Polycom, a leader in phones, now adds scanners to its portfolio.

I had a chance to play with the Polycom/Spectralink phone. It’s an impressive device that clearly builds upon years of evolution in Wi-Fi phones. That means it has more than the usual features of headset jack, soft keys, and rugged design. This new phone has a few extras: 802.11 A/B/G/N, color display, barcode scanner, HD audio, bluetooth, and a noise cancelling speaker-phone. But it has a few additional features worthy of notice.

I’ve never been a fan of WiFi phones. I prefer Dect phones because they were actually designed for wireless voice. But Wi-Fi phones make a lot sense in lots of situations – one wireless network for voice and data. That’s always made sense from a network point of view, but a bummer compromise on the voice side. But when the phone actually has a data component, that changes things’ convergence strikes again! This phone will replace devices – real convergence. No need for a separate scanner, the XML browser offers access to key apps, and oh yeah it happens to be an HD SIP phone. Now my only complaint about Vo-WiFi is the power consumption… oh a separate charger unit and an easy fast swap fixes that. This isn’t just a new phone, it’s a new concept that makes a lot of sense.