Last week I attended a virtual panel on video hosted by Wainhouse Research. The participants included representatives from Polycom, LifeSize, Cisco, and Vidyo. The topic was WebRTC. 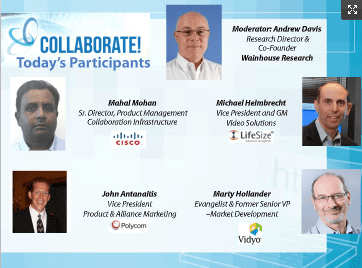 That same day Vidyo made a fairly major announcement regarding WebRTC. It was mentioned a few times, but its ramifications were unclear at the time. The panel discussed WebRTC at a high level, which mostly involved its limitations. None of the participants saw WebRTC as a big change for their industry. There’s merit to that argument – the impact of Asterisk, the open source phone system, never realized the “never buy a propriety phone system again” hype that surrounded it a decade ago. The fact is that WebRTC is limited compared to the full blown features of a mature, enterprise-class videoconferencing solution. The holes were too many to list, but the top ones included the overall quality, room system integration, mutli-point conferencing, and so on.

Asking this group of people if they are being disrupted is like asking Ballmer if the iPhone had a chance of success soon after it was first announced.

His famous quote of “it doesn’t appeal to business users because it doesn’t have a keyboard” was contextually true. Everything he knew about mobility and business users was working against him. He wasn’t alone, Clayton Christensen quite famously failed to initially recognize the impact of the iPhone as well.

It’s clear in hindsight they were wrong, but why? Here are two reasons: 1) The first iPhone was being compared to mature technologies. Many don’t remember this, but the first iPhone didn’t support Microsoft Exchange – that came later. Young technologies mature, and as they do they overcome many of their initial limitations. Ballmer was right that the iPhone v1 was not that suitable for business email, but the product itself was attractive to business professionals. Apple improved the product, and IT departments yielded to their customers and supported the iPhone. 2) The iPhone was deceptively called a “phone.” It was a actually a computer. People understood mobile phones, and already paid for them and carried them. This was just a different one, so it didn’t require a lot of mental calestetics to understand or justify. In reality, the iPhone was a mini, connected, computer, camera, diary, email, and social platform. Clayton Christensen said it would fail because it wasn’t disruptive. He later realized he was looking at it as a phone. Also, touch-screens were considered clumsy, Apple introduced the capacitive touchscreen. Not until this new technology could be tried were people willing to swear off physical keyboards.

Looking at WebRTC as just another video system endpoint is like looking at the iPhone as just another cell phone in 2007. The panel was mostly a discussion about why their existing, expensive products (that never really fully penetrated the workplace) were going to be fine in a WebRTC world. Bottom line is that the industry isn’t concerned about WebRTC because it uses the wrong codec and can’t do much as an endpoint – resulting with inferior technology. At worse, WebRTC will have no impact, at best WebRTC will drive awareness to their existing solutions.

Vidyo’s perspective was one of co-existence rather than us vs. them.

Vidyo doesn’t consider itself a hardware company (yes, it repackages general purpose hardware). Nor is it too concerned about endpoint hardware. This is best illustrated by its embracing of the Intel NUC. Vidyo is all about SVC and its VidyoRouter software.  Unlike the other participants, Vidyo views the hardware as a necessary evil.  Additionally, Vidyo isn’t particularly married to the codec. The entire industry has a love fest with the H.264 codec not because it is great, but because there wasn’t a lot of choice.

WebRTC fans are excited about VP8 today and VP9 tomorrow – this is a Google controlled open-source and free codec. For most of the industry it means that a gateway will be necessary to convert from H.264. Google wants VPn to be a free codec and expects such a technology to transform and liberate communications. With the addition of SVC it has a better chance of success. And with Google distributing this within Chrome, Vidyo is now the only VC vendor that can embrace WebRTC as a quality endpoint.

So while the other vendors are assuring us that the WebRTC client won’t offer the quality that their other products offer, Vidyo just co-opted WebRTC to be a high-end client capable of robust SVC support. Vidyo just made WebRTC its bitch, it co-opted WebRTC as a quality endpoint.

The WebRTC fan base has no reason to complain as they didn’t lose anything – they just got a new option. Folks may complain about the SVC implementation being tied to Vidyo, but there is no such thing as interoperable SVC – at least not today. WebRTC is now positioned to leverage Vidyo for SVC (or not). With all the challenges associated with SVC (including patents), it will likely be easiest for developers that want SVC to use infrastructure from Vidyo and/or use the VidyoWorks SDK for applications. That may be a bitter pill for some open-heads to swallow, but a lot easier than MCU-indigestion.

To be fair there are a number of unanswered questions. How does one make an open source SVC client that works with proprietary infrastructure? Will Vidyo’s server components be easy to reverse engineer? Cisco has been a proponent of WebRTC, but will this change that? Will SVC work as well with VP9 as it has with H.264? Nokia is the last major barrier to VP9 legality, does the MS/Nokia deal change anything? What happens in a point to point WebRTC conversation – do two SVC clients need server infrastructure?

In this case, I leave the reader with more questions than answers. Stay tuned.

You can subscribe to Talkingheadz podcasts on your favorite podcast directory.

As enterprises try to solve the collaboration puzzle, providers like Sneek.io, Front, and Prodoscore are doing their part to facilitate WFH during COVID-19.

There is a great flow to this dialog, I think I will call it: Dialogflow. Also, the three participants sound really human. Most of the talk about AI is hype.  However, there are two areas in enterprise communications where we…