I have been using Twitter for about 8 months now. I really like it. It was actually @beelineBill that got me to try it (not sure he remembers it). I have met new people, made interesting contacts, increased the traffic to my telecom blog, and used it as a sounding board for a variety of personal and professional topics. Coincidentally, someone I met through Twitter (@Blairplez) just blogged about her experience (more broad than this article) with Twitter. (Why I Tweet – or How I’ve Come to Love Writing in Under 140 Characters).

But last week, Twitter made a change. It didn’t get much publicity, but it significantly reduced the value of the service. The change is hard to word in a sentence, but something like this: You no longer see replies of people you follow if the replies are to someone you don’t follow. Sounds harmless.

One of the most powerful aspects of Twitter is the notion of Open Follow. Mitch Kapor, the founder of Lotus Software, recently spoke about it and declared Open Follow as why Twitter is more important than Facebook. It allows you to determine what is interesting, not a machine. Tweets are effectively public – and people tweet to the world what they consider interesting. The world responds by selectively listening. This has been very powerful for celebrities, to personally reach out and share their thoughts to their fans – in a public, safe, controlled way.

First my Twitter stream is much slower now. The Twitter stream is an important measure of what people are talking about. I am currently following close to 1000 people – when I watch the stream and see over a few minutes two or three tweets on the same subject, that subject is likely interesting and deserves some attention. Twitter provides real time information unlike any other service, well it at least it used to.

Another important aspect of Open Replies is they are used to find new connections. Say I am following Bob and Bob regularly tweets about really interesting things. Say Joe is also following Bob. For whatever reason, Joe and I both find Bob really interesting and maybe (just maybe) Joe and I would find each other interesting. The question is how will I ever meet Joe. This is why Twitter has been so powerful, the ability to easily and rapidly expand one’s network.

In the past, sooner or later Joe will reply to Bob and Bob will likely tweet a reply to Joe. Something like “@Joe, great idea, I will try that next time.” Done. I would’ve seen that reply – curious what Joe said to Bob, checked out Joe and likely followed him. Now, new Twitter says Bob was talking to Joe and since I don’t follow Joe, it’s none of my business.

This is very bad. It means I will likely never meet Joe. It means tweets from people I find really interesting, that are directed to Joe won’t grace my screen. 100% of the people I follow (people I find interesting) may decided to tweet “@Joe Happy Birthday” – and I would never know it.

Now I guess I should not complain about a free service. Perhaps the Twitter folks felt it necessary to reduce overall traffic as a means to support the free service. I don’t know. But I do know that the hottest Internet phenomenon in the past few years has significantly reduced its value and there doesn’t appear to be much said about it. Or at least not across my screen.

I did come across one interesting work around. It is slow and manual, but worth a look. You can try http://mrblog.org/whatumissed.html

The Most Important Enterprise Communications News from February 2020 Events Avaya Engage: Avaya hosted its Engage conference in Phoenix. There were very few new announcements, but there were updates on several previously announced initiatives. The biggest was Avaya Cloud Office… 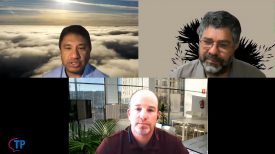 A Video Chat About Video

There is a great flow to this dialog, I think I will call it: Dialogflow. Also, the three participants sound really human. Most of the talk about AI is hype.  However, there are two areas in enterprise communications where we…