SfB saw very few improvements over the past year, so I was curious as to how Microsoft would fill its keynote slot at Enterprise Connect. The speaker, Ron Markezich, is new to me. The former CIO is a CVP within Office 365 (O365). 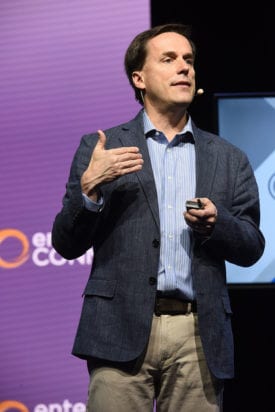 Microsoft’s Gurdeep Singh Pall assumed a thought-leadership role and educated us all on how UC was going to be different from the PBX. Gurdeep handed his EC keynote slot to Zig a few years ago. Last fall, immediately after the Microsoft Ignite conference, Gurdeep took a new role at Microsoft, and Zig left the company to pursue other opportunities.

Bob Davis, also with O365, has a corp IT background and appears to have taken over Zig’s role. Bob reports directly to Rajesh Jha, an EVP, over the development and service of O365. It’s not clear who is actually driving the SfB vision and roadmap at this time.

New leadership generally means new goals, objectives, and measures for success. It also means lots of staffing changes.Since CEO Satya took over, Microsoft has made the cloud a clear priority. That’s great news for SfB Online and O365, but not necessarily for SfB Server.

SfB is actually two distinct products. The traditional LCS/OCS/Lync solution, now SfB Server, is the most feature-rich offer. SfB Online is similar but a very different solution. This confuses people because both products use the same name and clients. There’s also a hybrid option that uses the online service for management and control of a premises-based server.

Since the initial launch of SfB Online, Microsoft has communicated its intent to eliminate the functional gaps between SfB Server and SfB Online. That positioned the Server product as the master mold. The gap has narrowed, but with the introduction of Call Queues on SfB Online, the hosted version is getting development priority. Call queues are an improved version of Response Groups found in the Server version.

The plot gets thicker with Microsoft Teams. This is a totally new, messaging centric, cloud-only collaborative application. Teams has significant functional overlaps with SfB (messaging, presence, voice, video). The big capabilities in SfB that are not found in Teams include intercompany messaging (coming to Teams), PSTN services (though teams does support voice and video calls), and broadcast meetings.

The powerful O365 Suite now has four overlapping products for communications and collaboration: Yammer, Outlook/Exchange, SfB Online, and Teams. Part of the appeal of competitive offers from Cisco, Slack, and others is they offer a single application for people, content, and communications.

Microsoft now has a decision to make: keep developing all of these separate, overlapping products, or reduce into fewer options. It seems reasonable that Microsoft might double-down on Teams as it is new, home grown, built for O365 and appears to be on the fast track. The video conferencing technology it uses appears borrowed from SfB. Adding PSTN and even hybrid connectivity to SfB server seems plausible.

That’s a tall order for an unproven product that just went GA last month. If it was within even the realm of possibility, it might make sense to move SfB development resources to Teams until the dust settles.

So, what did Ron have to say?

Ron opened with the obligatory praise of digital transformation and how the workplace is changing. I did not know there are twice as many teams as there were five years ago.

Ron pointed out that Yammer and Exchange are part of the communications and collaboration suite, but he recognized SfB specifically with these important attributes:

The first three are really the same thing. The second and fourth are about conferencing which came up several times. More on this below.

Then he offered the audience a (first) glimpse at Teams.

The demo was done by a Teams product manager and included: an overview of basic functionality, integration with other O365 apps (including SfB), and integration with third party apps. Teams is now included (and turned on by default) in all O365 subscriptions.

Immediately following the Teams demo was a Skype Room System demo. The Skype Room System was previewed a year ago at EC16 as Project Rigel. This is different (and cheaper) than the Surface Hub: it uses standard display(s), does not have a drawing feature, and is intended primarily for meetings.

Microsoft previously named Logitech, Crestron, and Polycom as the partners to complete the Skype Room System solution. Logitech was first to the market last Fall with its SmartDock bundle. Crestron launched its solution at EC17. It is integrated with its room management system and was part of the keynote demo. Polycom has yet to release a solution.

After these demos came Magical Moments.

Magical moments may sound familiar as it was central to Cisco’s EC16 keynote by Rowan Trollope. Rowan talked about the uncontrolled laughter and wonder of magic. He implied that room systems that automatically know who you are, and what meeting you plan to attend, are magical moments.

Whether you accept that or not, it is how Microsoft’s primary competitor set the stage last year. Microsoft agrees conferences can be magical, so offered three examples of how SfB enables IT staff to deliver magic were presented.

The first involved a combination of two new features: auto attendants and call queues. A branch off the attendant can be a call queue. The example involved dynamically creating a sales branch on the attendant that routed calls to an existing distribution list.

The third was improved analytics to better understand why some good calls go bad.

Neither “magic” nor “innovation” came to my mind, but such attributes are in the eye of the beholder. A key difference to note: Cisco presented magical experiences intended to delight the user while Microsoft presented magic intended for IT staff.

Ron then reiterated his announcements:

Skype Room Systems were announced last year, so this was a retread. The cloud video Interop service was also previously announced and demonstrated last year (Ignite), although it is still unavailable. Auto attendants and call queues are important additions to SfB, but not competitive differentiators. Call analytics are compelling, but not particularly innovative.

As if reading my mind, Ron addressed innovation by stating in the past 12 months, Microsoft has shipped more than 100 new features in SfB. Several of these features were then fast-scrolled on a slide (like side effects in a prescription drug commercial).

Here are some of the features listed:

Microsoft delivered a keynote that stressed innovation. I expect that SfB will see a few more incremental improvements along the lines of an auto attendant, but I don’t expect any big innovations in 2017. For that reason, I feel the keynote should have stressed something other than innovation — perhaps adoption.

I commonly run into organizations that have full access to SfB (Server and/or Online editions), yet they use other third-party UC and/or conferencing solutions. The issue is adoption complexity.

Recently I met with Dimension Data and Atos, and both GSIs have strong practices and technologies associated with SfB deployments. For a GSI, SfB is a perfect blend of RoI, complexity, and demand.

Microsoft has been working diligently to make adoption easier, especially regarding conferencing and implementation.

For conferencing, SfB is available globally. I think Ron wanted to make it clear that SfB is a conferencing solution (think WebEx) and not just a UC solution.

Regarding implementation, Microsoft has been focusing on the Skype Operations Framework (SOF), which surprisingly received very little attention in the keynote. Microsoft created SOF as a collection of best practices for SfB implementation and operations. It never takes long for this to come up in analyst or partner conversations.

Microsoft’s barriers to adoption are a bigger problem than features and innovation. SOF is Microsoft’s answer. SOF’s scope keeps expanding as do the number of SOF certified partners. There are now over 60 SOF savvy partners.

What isn’t clear – and once was – is the vision driving SfB. It isn’t clear if it’s Rajesh, Bob, Ron or someone else driving the solution, or if there is even just one driver. I left the keynote with many unanswered questions such as when SfB might offer customer facing collaboration with Dynamics, where SfB and LinkedIn might eventually intersect, and if there’s an Edge client coming for SfB (now that Edge supports WebRTC). I don’t think I’m alone in my thirst for road map details.

Every previous Enterprise Connect conference had Gurdeep or Zig along with marketing and product folks such as Jamie and BJ. None of these people are currently (or at least visibly) associated with SfB.

For me, the keynotes in order from best to worst were Cisco, Amazon, Twilio, Microsoft, and Google. My thoughts on Twilio keynote here and overall EC thoughts here.