“ThinkingPhones…announced that it has rebranded the organization as Fuze, the name of the company it acquired in November 2015.”

What else do you need to know? My POV: 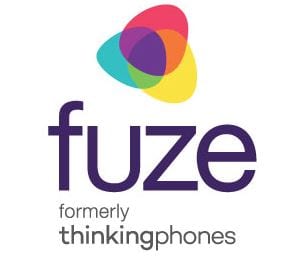 It took Fuze a few tries to find its name. Fuze rebranded from Fuzebox back in April 2014 (was that Fuze box or Fuzebox?)

Fuze is a good name – short, unique, and one syllable. It can be easily associated with tech or safety (a fuse breaks an electric circuit if the current exceeds a safe level), or fusion (the process or result of joining things together). Either are positive associations, particularly since some idiots still think cloud is unsafe or that UCaaS is just voice. In both cases, they cleverly replace the “s” with a “z’ becauze everyone knowz thatz cool.

The new Fuze took the opportunity to launch a new website which is required after naming a new CMO. Brian Kardon was named CMO last September.

Thinking Phones acquiring Fuze last year, and thereby Live Minutes (is that one word or two?) was a smart acquisition. Fuze brought to TPN stronger video, stronger WebRTC, stronger messaging, and a better name. The new logo though feels a bit similar to BroadSoft’s.

Changing names is always complex. It’s usually easier or certainly less risky to promote an existing brand than create a new one.  That said, thank goodness they didn’t change the name to Whaleback.