The Twilio #EC17 Keynote: Missed it by that Much

I was really looking forward to Jeff Lawson’s first Enterprise Connect (EC) keynote. I’ve seen him present numerous times, and he has a great style that delivers everything clearly. He is easy to follow, yet never condescending. He generally includes humor and live-coding, and he usually wows the crowd with announcements. 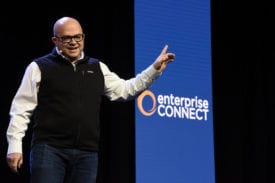 Expectations were high, but unfortunately he did not nail the keynote. As Maxwell Smart would say holding is fingers closely together: “he missed it by that much.” He fell victim to the live demo, bashed competitors with dated info, and chose the wrong demo for the audience. Other than that, it was a great keynote, and I mean that sincerely. He did well under pressure and explained exactly why Twilio is so successful.

Highlights of his message:

Jeff had some very clever jabs at Cisco. In fact, I think he even missed a few good opportunities. He was way too kind on his Venn diagram. His point was that Cisco Comm Manager Pros barely overlap with (young hip) People who use Snapchat. His jab was poignant, but respectful. After-all, he did describe the overlap as a “cool dad.” He was also nice to suggest the populations are about the same size. 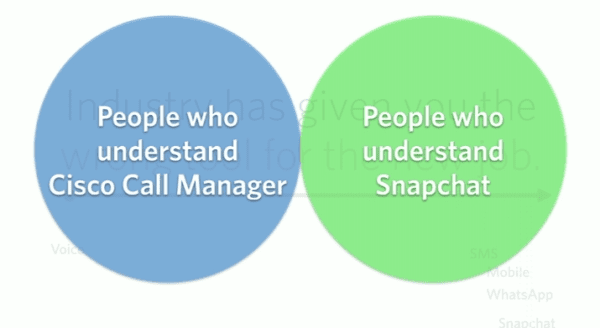 Jeff’s jokes were generally aimed at Cisco premises-based UC solutions. He never mentioned Spark, and, surprise, Cisco and Twilio have significant overlap in vision. Cisco is still supporting and developing its premises-based and HCS solutions, but its priority is Spark.

Both companies talk about:

Very different companies, but the commonalities are greater than what one might conclude after hearing Jeff’s keynote. Targeting other leaders such as Microsoft or Avaya would have provided a stronger contrast.

Jeff’s keynote fell short of greatness largely due to his demo start and finish.

We all know how cruel the demo gods can be, but this was particularly brutal. Prior to the demo, Jeff set up the Twilio reliability angle. Reliability is a top-cited barrier to adoption of cloud-delivered services. This is more perception than reality, so Jeff purposely made it a big deal. He interwove things like five-nine availability and twenty-two data centers operating across seven global regions. He cited Twilio’s API success rate at seven nines.

He nicely assured the audience that reliability and availability are built into Twilio, something you can’t say about traditional server-based solutions.

Then he tried to access Twillio.io and failed. Evidently, it was the local Ethernet, so to be fair the demo would have failed even if the destination was a server backstage. However, the failure diminished Jeff’s claims of super-availability. Even worse, this type of failure that terrifies CIOs  doesn’t even impact that previously touted seven-nine success rate.

Jeff’s demos are delightful to watch because he writes the code live – no prepared files. He even demonstrates how he tests the code before submitting it. It’s so simple even a CEO can do it (don’t let the title fool you, Jeff is usually one of the smartest in the room).

His demos often engage the audience, and that was the case here. He created a new number, enabled it for SMS, and asked the audience to text one of four things to the number. He quickly validated the data collection and then set up the “worst conference call ever” by creating multiple outbound conferences of like-minded people.

Within just a few minutes, Jeff provisioned a number and created interaction among thousands of strangers. Twilio provided all the key tools: SMS, outbound calling, and conference bridging. Most UCaaS providers would not be able to do anything like this, and those that can couldn’t do so in just a few minutes. Beautiful and exciting!

It’s a great demo for developers, but most of the EC audience is anxious to eliminate “the worst conference call ever.” Cisco and Google directly addressed how they eliminate common frustrations associated with conferencing in their keynotes.

I know Jeff wasn’t advocating the worst conference; he was showing simplicity and agility. But knowing the audience is a real thing. Demo what the audience wants, not what they want to get rid of. For example, Jeff referenced a large bank consolidating numerous contact centers into one Twilio-powered solution. Now that sounds interesting.

Jeff opened with humanity and said that agility was the key to great experiences, but he really only demonstrated agility. I’m a big Jeff fan, and I think he did a reasonable job. He came close to delivering a great keynote. IMO he came in third for EC17 (Cisco, Amazon, Twilio, Microsoft, and Google).

More on other keynotes to come.