In local news, CenturyLink completes its $30.3 billion acquisition of Level 3. Well, sort of. It’s not really local as CenturyLink is headquartered in Monroe LA. However, from Qwest, CenturyLink has a large presence in Colorado and Level 3 was headquartered here in Boulder County. Also, I am not sure sure if it’s fair to call this an acquisition as opposed to a merger. Certainly it looks like an acquisition – Glen Post remains in charge of CenturyLink and the Level 3 name is rapidly disappearing. It was two companies and now it’s one.

However, this one new company really is a merger of giants. Here’s the numbers:

And here’s the management team – I’ve highlighted those that came from Level 3. 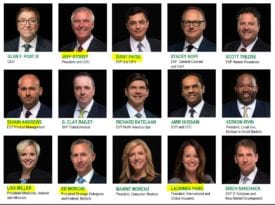 Glen Post has been with CenturyLink (or other brands in its evolution) for 34 years. He intends to resign as CEO and become Chairman of the Board on January 1, 2019, and has already named Jeff Storey as his successor. Storey, previously the CEO of Level 3, is now the President and COO of CenturyLink.

Despite the same name, CenturyLink is suddenly a very different company. It’s now a global provider “laser focused” on enterprise needs. Yes, enterprise needs as the new company derives 75% of its revenue come from business customers. Although a maximum of 25% of revenue coming from consumer services is still over $6.4 billion. Consumer services mostly equates to wireline residential and internet services with some TV.

The acquisition more than doubles CenturyLink’s fiberoptic route miles and significantly expands internet connectivity into 350 metro areas and more than 100,000 buildings. It also gives CenturyLink more control  of its services and network.

There’s a lot of optimism around the merger, but also a lot of unknowns. There’s significant overlaps in products and personnel. Now that the deal is complete, it’s time to roll-up those sleeves  and figure out what stays and who goes.