I was in the big Apple last week and was touring the head of legal around. I’m not really an expert on New York City, but he was less so. (Our company is west coast and Asian based.)

My associate pointed up at a bleak, plain, “brutalist” building and said: “What is with that building?” 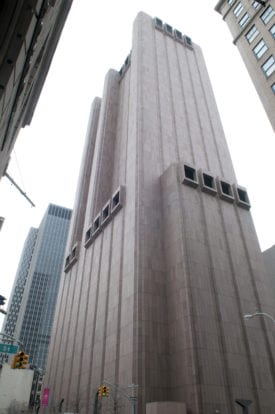 I responded simply, oh, that’s the “Long Lines Building”. He asked: “What is it?”

Hmmm. How does one respond to such a complicated question? This building is like an onion, with many layers. Much is and isn’t known about this building.

Of course, it housed several 4ESS switches that handled domestic and international calling. And, because of that of course it houses FBI and NSA operations. (The FBI building is located across the street.) That is well known and pretty well documented these days.

So I decided to respond in a more interesting way:
“When the President of the United States is in New York City, and there is an attack on the United States, and he can’t get airborne, that is where he goes. If the US found itself in a war, this is where the financial leaders go.”

This building is one of those secrets that is kept right in plain sight.

It’s built to withstand a nuclear attack. It can be self-sufficient for two weeks as it has its own water, power, sewer, air filtration and it will be the most connected location to the rest of the world. It even has a small TV studio inside.

He paused a moment, then cocked his head at me, and said: how do you know that? I responded. “First, I have been inside the building, when it was new, in the 1970s. Second, just look at it. I mean, look at the thing and see if your brain just knows I am correct. Third, read this article (as I keyed it up on my iPad).

He turned to me and after another pause said: Of course, what else could it be. It’s funny how something like this can be hidden right in plain sight.