The Humanity of AI

I recently enjoyed the movie Sully. Spoiler Alert: He lands the plane in the Hudson River.

After the crash, or “forced water landing,” the movie focuses on the subsequent question if the pilot was a hero or failure. The actual emergency landing was impressive and had no fatalities. However, initial simulations indicated that a runway landing was possible at two different airports. 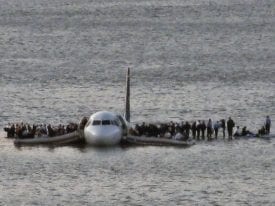 At a key point, Sully challenges the NTSB investigators to get serious. He says the simulations are not taking into account the “human factor.”  That’s a strange defense. If the human factor causes a plane to land in the Hudson and non-humans land at an airport, then take the humans out of the cockpit!

Sully’s point was further clarified to be about reaction time. His assertion was that a human pilot would first diagnose and attempt to restore lift before taking abortive actions. The simulations were immediately returning to the airport after the bird strike.

On that actual flight, Sully and his first officer made several attempts to restore lift. By the time they confirmed the engines lost, the airport runway option was eliminated. This was reproduced with the simulations after they added 30 seconds for assessment and restoration.

The movie concludes that Sully is a hero, and I’m not refuting that. But, I think his humanity defense was wrong.

Many of you reading this post will eventually fly in a pilot-less plane. Self-driving cars are upon us now. Self-flying planes are coming. They are conceptually easier than self-driving cars since there are fewer obstacles (bikes, pedestrians, traffic, etc.) in the sky.

At least in the movie, it appears Sully was confusing humanity with problem determination. He points out that no human pilot has trained for that particular situation. That no commercial plane has lost both engines at such a low altitude over one of the most densely populated places in the world. It was his experience, not rote training, that saved everyone on that plane.

This is why we don’t rely more on auto-pilot today. Autopilot is great a maintaining altitude and course, but can’t properly react to the unexpected. Autopilot is old tech. New tech relies on AI which adapts to new situations.

AI is still young and rapidly evolving. It’s rapidly improving and it is not unreasonable to assume that a future pilot-bot will outperform human, experienced pilots in the not too distant future. The movie demonstrated the Sully and crew performed their duties in a serial, non parallel, manner. Future bots will likely be able to simultaneously communicate the situation and actions, diagnose and attempt to restore the engines, and implement emergency maneuvers. These future pilot-bots are inevitable, necessary, and will become safer than human pilots (eventually).

There is already a shortage of pilots that’s expected to get worse. However, that could change practically overnight if/when the FAA approves single pilot flights accompanied by a co-pilot-bot. Then comes full automation, and the cockpit itself will disappear soon after that.

The implications are significant. Planes will be able to take-off, land, and fly closer together which increases the capacity of existing airports. Pilot-less planes also effectively eliminates the threat of hijackers, at least from onboard.

Sully wasn’t looking for humanity. He was looking for a reasonable response to an extraordinary situation. The initial simulations proved a runway landing was possible, but that’s because the simulations were unrealistic. As our AI improves, we will transfer more ‘experience’ into the both the bots and the simulations. The results will uncover totally new, unfathomable capabilities.