The History of the Dial Pad

The history of the Touch-Tone dial is remarkably complicated and fascinating. Today we all know the 12 button dial with 123 at the top and * and # in the bottom left and right. (Why aren’t there emojis for Touch-Tone buttons???!)

But it took a long way to get to that point. There were many possible layouts for push button dials studied. Buttons in a circle and buttons in columns and other odd arrangements.

Eventually the decision was made to arrange the buttons into a grid of rows and columns. The reason was that it simplified the electronics. Each row and each column would generate a unique tone, and two tones would signal a single number. This is why the dialing system is called DTMF: Dual Tone Multi-Frequency. The particular set of tones were chosen so that pairs of tones were rarely found in human speech, and so that they weren’t harmonics of other signaling tones. It was possible to have eight different tones with the system chosen.

The eight possible tones could be arranged into a grid with four row tones and 4 column tones. Hence, 16 possible buttons.

The military had an immediate need for these additional buttons. At the time that Touch-Tone was invented, the AUTOVON network was being developed. This was a dedicated telephone system ONLY for military communications. It was basically identical to the nationwide long distance network, complete with its own area codes (which were different from the PSTN.) One of the needs in AUTOVON was to be able to specify the urgency of a call, and to preempt existing calls should lines be busy. Hence, the right-most row of buttons on the Touch-Tone dial were a part of the original specification: 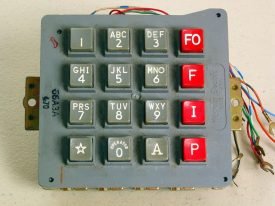 Dialing a “P” before a call indicated that it has “Precedence” over normal calls and would knock down in-use circuits so that Precedence calls could be completed. The “I” button was for “Immediate” and would even knock down “Precedence” calls. The “F” was for “Flash” and was only for the most dire emergency and would take the most direct, most immediate route without regard to whether circuits were in use or not. “FO” was for “Flash Override” and, well, I am not sure it was ever used. I heard rumors that it was only for nuclear war and for use by the President.

Military phones had a 5 pointed star and for reasons that nobody seems to know the button to the right of “0” was confusingly labeled with a Serif-A. An odd choice. The Serif-A button was initially used exclusively to indicate that dialing was completed and the call should go through. later, it was used as a feature prefix.

The Bell System saw a benefit to Touch-Tone dials for consumers, and they wanted to market this military technology to homes and businesses. Obviously homes would not need the P/I/F/FO buttons, and those were easily eliminated.

When the Bell System started to tariff Touch-Tone service they ran into a major problem. Regulatory agencies objected to the star and Serif-A buttons because they looked like prohibited data communications features. Thus, after considerable conversation these two buttons were removed, and the consumer version of the dial looked like this:

Ten buttons. 1-9 plus 0. And, that is how Touch-Tone service was sold and marketed when it was launched. Rotary dial phones were known as “Model 500” sets. The Touch-Tone version became known as a “Model 1500”.

After a few years the case was made for Custom Calling features. Dialing 1172 and then pausing for six seconds would initiate Call Forwarding. It was an awkward process and very error prone and difficult to teach. Regulators connected to adding the star as a direct replacement for the “11” prefix and the # character to be used as in the Autovon network to indicate the end of dialing.

It is unclear why the 5-pointed military star was changed to a 6 pointed asterisk. Some say it is because the asterisk is on a typewriter. But you may notice that always on a typewriter or keyboard the asterisk has points going up and down (12-o’clock and 6 o’clock position) and on Touch-Tone dials the points are always at the 3-o’clock and 9 o’clock position. The inconsistency between military stars and civilian stars continued throughout the live of AUTOVON.

The need to change the Serif-A is obvious. The choice of the # is actually more obscure than you would think. By the time these telephone symbols were being finalized, a lot of emphasis was on global standardization. So symbols that were used on Europe and North America needed to be selected. beyond the star, characters in common between Europe and North America were uncommon. The closest was the American pound sign and the European hash character (also called a hatch.) The American pound sign looked funny to the Europeans as it was very closed and tight. So a compromise was reached and the telephone version was about mid-way between a conventional American pound sign and a European hash. You will notice that the telephone # is more squared, and the internal box is larger and the arms are shorter than our #. But it was a symbol that both cultures could understand, communicate, and type.

Hence, a new model of the “Model 500” that featured the two extra buttons was created and designated the “Model 2500”: 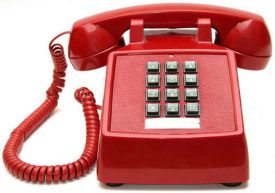 Fortunately, the UK also chose to follow the Bell System design and they abandoned their version of the push button dial: 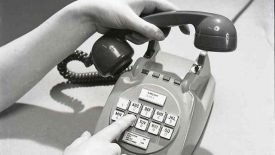