For decades there has been a lot of debate over whether offices should be clean or messy.

There is certainly no definitive answer on this. I’ve had top employees that are messy and top employees who are spotlessly clean. And, the worst persons I have seen have been spotless and have been pig-pens.

But I have seen some patterns. I thought I would share a few decades of observation and experience.

All of the top-performing pig-pen persons clean their offices with regularity. They know important things are buried and forgotten. Their messes are usually because they finish one project and then jump into the next, raring to solve yet another urgent need. Cleaning their offices is a legitimately lower priority than the next thing they can accomplish. But eventually, they spend 1~3 days going through everything because they need to get re-balanced and re-prioritized. 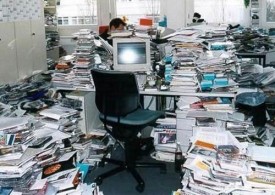 So, look for the pig-pen person who goes through the purge/clean cycle every 3 or so months. If they do this, they are probably a very productive person. They are just working on what is most important.

But also the super-neat person is one to watch. Their spotlessly organized office can often be a sign of an empty brain, a lack of progress and change, inflexibility, and high-overhead. Their need to appear organized goes to such an extreme that they don’t undertake new projects, they don’t risk doing things, they don’t like having to restructure the files on their desk.

Actually the under-performing neat-nick can be harder to spot. They are always on time, always organized, always have that folder at-hand. But when you look at the project list you find they are accomplishing very little. They just sit there in their office grooming it. It’s like that beautiful model that spends all of their time grooming themselves…but you can’t hold in intelligent conversation with them on a topic outside of fashion.

I’ve found that it is very difficult to teach and advance either of these two personality types.

The disorganized slob that never cleans their office resents any authority and really is incapable of prioritizing things. Their office is a mess because they can’t organize their thinking. They operate in crisis mode and their work is sloppy.

The neat-nick is often very shallow and not a deep thinker. I have never found a way to make a shallow person into a thoughtful and insightful deep thinker.

Myself, I am a pig-pen type. My office would naturally form habitrails. But every 1~3 months I block a day out and go through every single piece of paper and get remarkably organized. After that purge my office looks like a neat-nick.

As with all management, there is no magic recipe. But there are general rules that I think apply everywhere. My thoughts on the pig-pen and neat-nick are generally applicable, I think.