A theory regarding the Zang Universe. 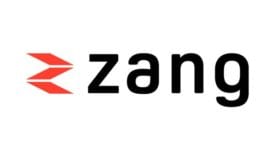 During his keynote at Enterprise Connect, SVP of Engagement Platforms Gary Barnett referred to Communications Platform as a Service (CPaaS) as a “hyper-growth” market that represents a $7.5 billion opportunity. His next announcement was Zang – a new Avaya owned services subsidiary.

Zang is probably just a made up catchy sounding word. Those that search for meaning may find that Wayne used it to mean “excellent” in “Wayne’s World.” There’s also a Persian meaning of cymbal or bell.

Whatever its meaning we can agree it was a surprise. Avaya did a great job of keeping this under wraps until Barnett’s keynote. Not even the booth staff knew about it until the morning of the Enterprise Connect keynote earlier this month.

Zang is Esna Plus (the old Esna plus a few new things). Esna has evolved through several transitions. Its most recent transition was into middleware, and offered strong solutions for integrating UC services with various cloud services. Esna became Cisco’s primary integration route for Google Apps. Avaya acquired Esna in 2015.

Along with all the technical goodies that came with Esna, Avaya got a solid team: clever, entrepreneurial, dev savvy, and persistent. Most of that team has now been de-integrated from Avaya to staff the new Zang. In fact, Esna really is the core of Zang. Zang’s General Manager is Mo Nezerati – one of Esna’s founders. (Lee Ho of Esna Marketing did not make it back, he was recently promoted within Avaya Marketing).

In addition to Esna’s solutions and applications, Zang also offers:

I had the opportunity to meet with Mo and Lee in Orlando days after the announcement, but I left with several unanswered questions. The first is where its underlying CPaaS engine came from. My initial assumption was EDP (now Breeze) running on Aura, but they insist Zang isn’t running Aura (or IP Office). Even under NDA Mo and Lee would not reveal their source, so I had to develop the Big Zang Theory myself.

My primary clue was presented during the Avaya keynote when Mo invited a Zang “alpha customer” on stage from TelTech.co to share his success story. Eli Finkelman, the CTO and co-founder of TelTech, explained that his company used Zang to create its TapeACall mobile app. He said Zang was a better fit than competitive CPaaS offers including Twilio. It’s a great story, Zang’s APIs enables TapeACall to record mobile calls without per minute fees or monthly charges.

Now I don’t know when Zang was opened to “alpha” testing, but TapeACall was launched in January 2013 – more than two years before Avaya acquired Esna. According to its site, TapeACall was created using APIs that TelTech created in 2011. These APIs were later launched as a CPaaS called TelAPI in September 2012. TelAPI also lists Finkelman as CTO and co-founder. I asked Mo to comment on this, but he declined.

Zang appears to be TelAPI – Avaya may have partnered, licensed, or acquired TelAPI. Take a look at the two websites of these services (images captured last week). 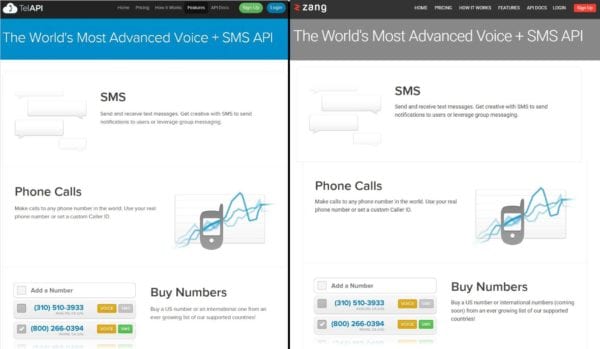 This is reassuring because a brand new, untested service could cause some developers to shy away. But it is not new and untested. Back in September 2012 when TelAPI was launched, Teltech posted a blog that included this description:

No longer must developers and entrepreneurs have a deep understanding of telecommunications systems to build applications that leverage voice and SMS. TelAPI’s cloud-based communications platform requires no hardware, no setup and no network administration. That means developers can focus on features, functionality and creating innovative telephony applications….

Why a Separate Company?

Zang is positioned as a wholly owned subsidiary with proven technologies and employees in a growing sector. I do see some logic in a new name as Zang’s core services will appeal to folks that may not fully appreciate the “Avaya” brand. Theoretical independence from its mothership could keep Zang nimble. Mo even shared on the keynote stage that he’s excited about being back in a more agile and entrepreneurial environment. A subsidiary could potentially reduce channel conflict.

Though the degree of independence is a bit confusing to me. Avaya draws a distinction between a wholly owned subsidiary and a separate and independent company, but the difference is not clear. It is notable that Nezerati has a GM title instead of CEO. Also, two of the three people in my Zang briefing were Avaya employees.

The degree of separation raises questions such as which company or who at Zang is responsible for Zang marketing? Avaya tells me it has no plans to sell Zang’s services, so then what becomes of the Avaya-Ensa integrated solutions? Will Avaya customers seeking a CPaaS solution be directed to Zang? Most UC companies are now embracing workstream messaging – will Avaya somehow prioritize Zang Spaces or will other UC neutral options such as Redbooth or Hipchat be on equal footing?

This subsidiary approach is not the story I expected when Avaya acquired Esna. It is in stark contrast to the direction Cisco took with its acquisition of Tropo which is being integrated across its collaboration portfolio. It is unclear to me how much Zang can leverage Avaya’s portfolio or customer base. Many Avaya customers and partners have already built IVR and CTI applications on Avaya Experience Portal. There’s also an SDK for Aura Application Enablement Services. Breeze is the newest offer, but is limited to users of Aura.

Supposed “Twilio killers” were ubiquitous at EC16 and includes diverse offers from firms such as Cisco, Vidyo, Oracle, and Microsoft. The battle for developers got interesting just one day prior to Zang’s announcement when Cisco announced a $150 million fund to stimulate and attract Spark development. Every lever (price, portfolio, specialization, region, etc.) is being pulled by CPaaS providers as they differentiate their offers.

Overall I am positive on Zang, but I think there is a lot of ambiguity to clear up with regards to its go-to-market and relationship with Avaya. Though, to be fair, Zang isn’t even a month old yet.