The Best Way To Connect To The Cloud

At a high level, there are two ways an enterprise can connect to a Cloud Service Provider (CSP) today:

To date, Cloud 1.0 has enterprises deploying applications that are used to manage the business. Microsoft’s O365 is a great example.  If Outlook or SharePoint perform slowly, while this is irritating to employees and has a small impact on productivity, it is not customer facing.  Cloud 1.0 networking primarily uses the Internet where QoS can be problematic.

The problem with both of these connectivity models is they are point-to-point connections, whether these are Internet tunnel based or layer 2 direct connects.  Figure 1 is an high-level overview of a Cloud Interconnect configuration. 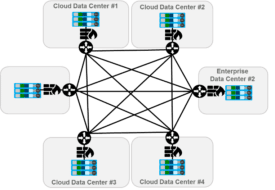 Cloud 3.0 is a multi-cloud architecture.  Enterprises that are leading the charge of putting mission critical applications in the cloud have found that to keep costs competitive, ensure high reliability, and provide optimal performance, it is best to run these critical applications distributed across multiple cloud providers and many different locations worldwide.  Cloud 3.0 will drive a new networking architecture.

Cloud Networking 3.0 inter-networks services by allowing applications using APIs to control network performance and security.  Networking and security will run alongside of applications inside the private or cloud data center.  Unlike today’s Internet or Direct connections which drop you off at the “front door” of a cloud provider, and then you have to use their proprietary network and security solutions.  TLS 1.3 will further ensure that nothing in the middle of the network will be able to see into the packet.

Cloud Networking 3.0 will have the following attributes:

Figure 2 is an example Cloud Internetworking where routing and security are not only running at the edge of the data center, but running in the compute areas with the applications. 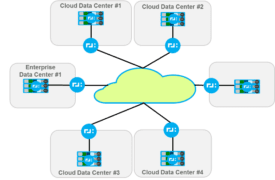 Where can you buy a cloud internetworking solution today?  There is no one turnkey solution, yet….   Many of the SD-WAN vendors are pivoting to play in this market, since having the branch office talk directly to the cloud based application, and avoid network backhauling is one of the core areas of business value.

Today’s SD-WAN vendors have three inherent challenges in the future cloud inter-networking.  First, is they rely on IPsec tunnels.  IPsec tunnels add a lot of overhead doing encryption and do not scale well.  With every critical application using TLS, the need for doing network encryption goes away.  Plus with TLS 1.3, their ability to do any type of firewall or security functions in the middle of a network path is severely limited.   Second is that they rely on VxLAN for their segmentation.  Layer 2 segmentation is not as robust as layer 3 for network performance or security.  Third is that most do not offer higher level application centric networking services.

So, who will thrive in the cloud inter-networking market?

The current network architectures of a simple edge, intelligent distribution layer where routing and security occur, and a high speed core will change.  Routing and security will reside at the very edge, where users and application are.  The middle of the network will be just a simple, high speed, IP data plane that passes encrypted & authenticated packets.  Who will control and manage the network edge is TBD, but everyone in-between the edge points will just be a commodity network bit hauler.