The Bankers Should not be Allowed to run Verizon

The bankers should not be allowed to run Verizon…or even banks for that matter.

Verizon has for most of its existence had a great cellular network. It’s been reliable, drop-call free, and fast.

But recently this has all changed. Verizon just simply sucks. Its new “Advanced Calling” has notoriously bad (choppy) audio and introduces dropped calls as a regular event. I don’t know what happened, but Verizon is falling apart.

I long felt that Steve Ballmer (who single-handedly destroyed Microsoft over the past decade) is a shining example of how MBAs are not good leaders. They are money launderers and know how to squeeze blood out of turnips. But they don’t build core value. It’s refreshing to see Steve Ballmer gone. Microsoft is doing a lot of things right now and they may just recover.

The CEO of Verizon changed a couple of years ago. The new one is a banker. And Verizon is in deep trouble.

Let’s look more closely at Verizon. They are a $120 Billion a year company that shows a net income of about $10 Billion. This looks, OK, right?

In the past 12 months, their net change in cash has been more then MINUS $40-BILLION.

Historically they have run with positive cash flow. But now it is very negative. This little chart says a lot: 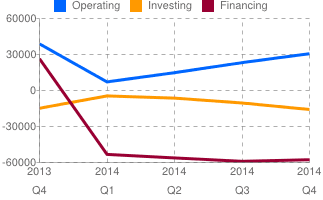 Look at the red line. That is MINUS ALMOST $60 BILLION. Crash!

Verizon’s Balance sheet looks pretty respectable at $232 BILLION dollars. Nothing to worry about here. (Wrong!) $105 BILLION of their Balance Sheet is “Goodwill & Intangibles.” Half of Verizon’s valuation is smoke and mirrors.

How did Verizon get into this mess?

Verizon got the notion that it was going to play lots of “money games” (my term) and jiggle the books to provide the illusion of increased shareholder value. So they took on lots of debt, and they even started buying back their own stock. This created lots of debt, that in turn gobbled up their cash.

What did Verizon do when it ran into a cash crunch?

Why, they sold their towers. They used to own lots and lots of towers. But now they sold them. And, they sold millions of customers. And, they strategically got out of the wireline business (e.g. no longer developing FIOS high speed Internet.) In short, they quit being a telephone company and started being a bank.

I am certain that John Legere, the maverick CEO of T-Mobile has been watching all of this with glee.

You see, when a company leverages like Verizon they get into short-term cash-flow problems (like I think they now are.) This makes them a perfect “sitting duck.”

So I am certain that John Legere at T-Mobile shouted down the halls: Let’s help Verizon kill themselves! Let’s squeeze their ____s. Start a price war! Let’s drain their cash. They will come to us on their knees while they sell of assets.

Meanwhile, all of those proprietary Verizon towers are owned by American Tower and Crown Castle and are conveniently available for T-Mobile to piggy-back on.

Yes, I think John Legere is one smart dude. And, yes Daniel Mead is an MBA. Let’s wish him a happy and early retirement.