I grow weary of smoke and mirrors. As an engineer I prefer facts over story telling. So Tesla especially bothers me. They bother me because I think they give all of high-tech a bad name. When companies have such a large “reality distortion field” it just makes high-tech seem unbelievable. And, this hurts the more boring businesses like telecom where we mostly do what we say we will do. Telcom is also confined to making boring phones rather than launching Roadsters into space. 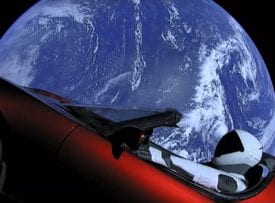 As I talk with people the first thing they talk about is Tesla’s Gigafactory and amazing battery technology that makes their electric cars possible. I gag when I hear this. I used to buy into this story, too. But what I understand to be the case is that Tesla mostly uses off-the shelf 18650 lithium batteries. Yes, they use $6 batteries you can buy on eBay and amazon. That’s what I hear. They just use thousands of them.

In telecom we talk about unified communication. We work through the boring problem of transporting fax machine data over the internet, and we struggle with voice recognition and menus and VOIP. About as fancy as it gets in eliminating echo on a speakerphone.

But when you are Tesla you are making the Model S while you are promising to deliver the Model 3 (now almost two years in advance of real general availability.) It seems that every time Tesla starts to get called on its puffery (“my dog ate my homework”) it launches something even more fantastic and impossible than the last thing. So here we are with colonies on the moon. Solar powered homes using dollar tiles that look like shingles. (Tesla has yet to start making those in volume.) Then, they promise digging private tunnels through cities…small little tunnels that have almost no capacity and yet we get so excited we forget that Tesla still isn’t delivering many Model 3 cars.

Tesla talks about their cars auto-piloting across the country when pretty much they can simply stay in a lane and avoid running into things that aren’t painted the color of the sky.

The public is so addicted to these crazy promises that reality just seems uninteresting and boring. It’s like a drug where the real world just seems so dull when you can live in TeslaLand with self driving cars and rocket ships and Gigastuff. And that is a problem for the telecom industry.

We telecom people are grounded in reality. Our stuff must work, must be reliable, must be simple and cheap, and it has to be compatible. That’s because pretty much everybody in telecom has to make a profit to stay in business. Even the mighty Western Electric turned Lucent turned Alcatel has learned this the hard way. And, then there is Tesla who marches right along with losses of $2 Billion a year and that seems OK.

Why is it OK for Tesla and not OK for us in Telecom? Oh, right, because we’re not launching Roadsters into space…we launched communications satellites into space 50 years ago and that’s no longer exciting.

Perhaps we should start just making stuff up. It could go like this:

With the new Berkshire Communications Replicator you can replicate food and games. And, optional modules will be available to produce automobiles and money. Availability will begin in 2015 and you can get in line by placing a fully refundable $1,000 deposit now. (Note that people who purchase the “Living Plants” replication option will receive their units ahead of others.) Pricing will be announced 90 days before the replicators ship.

Don’t tell anybody that the secret to the replication is simply off-the shelf 18650 batteries. Shhh!

The Most Important Enterprise Communications News from May 2020 “There are decades where nothing happens, and there are weeks where decades happen.” ~ Vladimir Lenin Situational timing can make this report difficult. Most of May was still about the pandemic,…

The Most Important Enterprise Communications News from June 2020 Whadda Month! I figured I was going to skip Covid-19 this month. But, the story of the year applies to June as well. The collective sigh of relief many of us…

Every year I write an Annual Report. It catalogs the year’s adventures around analyst events as well as attempts to pull together some themes and observations. 2020 was a very strange year. Other than a few regional van trips, I…

Thoughts on iPhone 12 Pro Max vs iPhone 7 Plus

I upgraded my five year old iPhone 7 Plus for a new iPhone 12 Pro Max. I got a $1,500 model with maximum RAM. It is genuinely surprising how little the iPhone has changed in five years. Here are my…