I believe Scott is the first guest to return to TalkingHeadz. Our first interview with Scott took place after Infocomm 2018. Once again, in this interview we were able to discuss with Scott recent product announcements from Logitech: The Rally Bar, The Rally Bar Mini, RoomMate, and enhancements to Sync management. 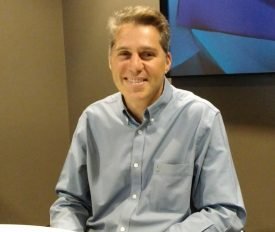 When Scott told me about his new job at Logitech, I had some questions. What was a UC/video professional like Scott going to to do at a keyboard company?  It did not take long to get an answer: turn them into a video leader. That started with the Brio webcam, an impressive device that remains popular still. The Logitech Meetup came next, and that was the first USB meeting peripheral that I really liked.

The Rally camera system raised the bar even higher. Oh, did I say bar? The newly announced Rally Bar is a bold move for Logitech as it moves them from USB peripherals to complete systems. I’m a strong believer in Android-powered room systems. Does the OS really matter? Yes, because mobile operating systems are more efficient, use lower-cost hardware, and are able to benefit from a broader ecosystem of developers and applications. In other words, less expensive solutions that get to market faster.

Scott is always calm (or at least appears to be) even though he’s been caught in treacherous storms. He was leading BroadSoft marketing as it was shaping its initial brand; he ran a video startup while the entire sector was transitioning to HD, WebRTC, and freemium services; and he was running a video division as Microsoft, Zoom, Google, and others saw their biggest increases in demand.