At the Recent Wainhouse Summit in Santa Clara, I made it over to Sunnyvale to check-in at ShoreTel World Headquarters. 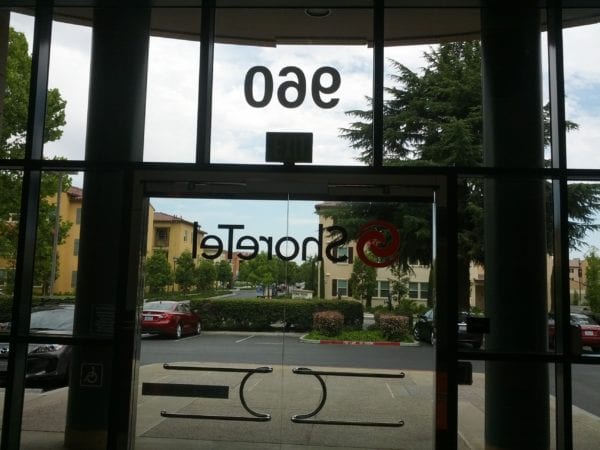 I consider ShoreTel a contemporary because we both got into telecom about the same time. The problem with that image is that neither of us are very young any more. Our young, idealistic times are behind us. I think it was probably Blackmore that sucked the remaining youth out of ShoreTel. I don’t mean to suggest lack of innovation – I mean that ShoreTel was the radical IP company when everyone else was still digital. ShoreTel was fighting the status quo of the industry – today it’s part of the industry. The ankle biters are now yielding WebRTC or other new technologies as the means to disrupt the establishment.

Don Joos has now been CEO for about a year and he is making tons of changes. In the future, we will remark about the Joos turning point. It’s actually amazing how much ShoreTel changed in the past year (and how much they intend to change still). Joos was promoted from within, so he didn’t need to spend 6 months learning the company (and industry). Instead he starting tweaking things on day one. To be fair, the vision Joos is implementing can be partially attributed to Blackmore.

It was Blackmore that made the major gamble in acquiring M5. At the time, I was positive on the acquisition, but I’ve certainly had my doubts since. The acquisition always made sense from a strategic point of view, the devil is in the details – in this case the integration details. The technology, staff, locations, and management were all incompatible  – throw in (and I do mean in) super-storm Sandy at the NY data center and it could have very well been the end of ShoreTel.

It seems now with hindsight clarity that ShoreTel had a pretty good idea where the industry was headed and M5 was already there. M5, now ShoreTel Sky, has become the company’s strategic linchpin. The acquisition took place in early 2012. At that time, ShoreTel had a fairly limited premises-based solution that mostly fit into simpler and smaller organizations. The company has been diligently working on a single architecture for prem/cloud and own/rent. That is no small feat – consider what they did with their new phones earlier this year.

The acquisition introduced two problems: their distinctive ShoreTel phones didn’t work with their Sky/M5 service, and even worse Sky/M5 was reselling Cisco phones. The Cisco phone thing wasn’t really a problem for Sky/M5, but it was considered bad-form for ShoreTel. It was one of the reasons Gartner punished Sky/M5 in the 2013 UCaaS Magic Quadrant. The obvious answer was to bring the ShoreTel phones to ShoreTel Sky/M5, but that wasn’t so easy.

The ShoreTel premises-based phones used MGCP not SIP. MGCP and SIP once battled for dominance and SIP won. MGCP is actually a pretty good solution for IP phones, simpler – not peer to peer as if that matters to anyone. Sky/M5 didn’t use SIP either, it had instead standardized on Cisco Skinny. To have a common ShoreTel endpoint for both meant bringing MGCP to Sky, Skinny to Premises, or introducing SIP to both.  ShoreTel chose to reengineer Sky/M5 and its Premises solutions to use SIP while simultaneously creating its first ShoreTel SIP phone. They did all that successfully last year, and that was only step one.

They are continuing down this path of alignment. Recently they announced ShoreTel Connect that will bring hosted Sky-based services to its premises customers. For example, ShoreTel Connect Scribe adds voice mail transcription services to on-prem systems. This type of speech recognition is very expensive for onsite systems, so makes sense as a hosted add-on. ShoreTel Conenct is invoiced monthly per mailbox (OpEx). The company has big plans along these lines.

I got to meet with several folks during my visit. It turns out to have been my last meeting with Bernard Gutnick as a representative of ShoreTel as he has since left the company. He was there for 6 years. Bernard is well known within the analyst community as likely the most passionate analyst relations person out there. This guy bleeds orange – at least he did. I only knew Bernard through ShoreTel, but he has been around telecom. Previous gigs include Aspect, Covad, Octel, and Sylantro. Actually, based on his resume, it’s a surprise ShoreTel hasn’t been acquired. I suspect Bernard isn’t going too far from telecom, and I look forward to an ongoing relationship with him.