Sectionalization of Comms Then and Now

The internet appears to be doomed.

Its been recently revealed that the US government is monitoring and recording most of the communications on the Internet. They do this both domestically and internationally. While PRISM has been known about publicly for a couple of years, it is the Snowden revelations which have clarified its depth and scope.

I have pondered at some length why it is only now that the press has exposed PRISM. After all, I knew about it years ago as did most of the corporate IT types when discussing security. I think I have an answer.

You may remember a few weeks ago that the AP news agency was having their reporters spied upon, and their telephone calls logged. This created an outrage within all new media. The press is highly protective of itself. So my personal theory goes that the decision to release news on PRISM was actually a retaliation by the news media against being spied upon. At the least, the timing is profoundly coincidental. So, we have a press that is upset at the loss of their privacy and in response they choose now to publish the reports that the government is spying on everybody. It’s all blown up.

The long-term implications of this for the internet are enormous!

One of the scenarios being actively discussed is withdrawal from the internet itself. There are actual discussions that countries could simply sever themselves from the internet. They would do this by creating a separate internet using the same technology and protocols and just not interconnecting with other countries or untrusted organizations. Such a thing was far-fetched and inconceivable a few years ago. But consider places like Iran and Syria. There is not much reason that they need to be connected to the global internet. They could just operate their own national network.

The US military basically does this already. They operate numerous “internets” which are separated from the main internet. The separation is sometimes physical with nothing wired together, and sometimes it is done through routing. The internet is at risk of disintegrating and compartmentalizing.

This reminds me of how the US phone system used to operate. Even since the 1920s the phone system was carefully designed to “sectionalize.” The photograph to the right is of a “Line Load Control” from an old Panel Office Circa 1925: 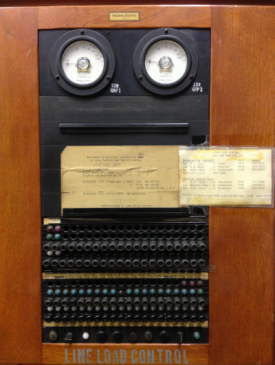 This panel contained a series of switches that would cut off incoming or outgoing service to groups of telephones within a central office. Every subscriber line was classified as an “A” or “B” or “C” in terms of priority. Government and essential services were the highest priority and would rarely be cut off. Important businesses would be a lower priority, but still higher than ordinary citizens. Finally, the “C” priority people like non-wealthy residences would be the lowest priority. The Line Load Control panel had a series of switches. Pulling a knob would disable either incoming or outgoing calls for the section that it was responsible for. This was called “Sectionalization.”

There were two primary uses for Sectionalization. The first was that if a Central Office became overloaded, traffic could be sectionalized to the more important traffic, or load could be shed so that everybody had a fair chance to place calls. This happened during the assassination of JFK in the 1960s. There was so much calling traffic that government, businesses, and wealthy individuals were given unrestricted telephone service while businesses and residences were throttled back. If everybody is calling everybody then nobody goes through. So you allow only a small number of people to originate calls so that their calls can go through…more total people can communicate.

The second use for sectionalization was panic control. Let’s say a nuclear bomb went off in St. Louis. Then, it would be important to black out the St. Louis area. All phone service would be sectionalized, as would media lines. There would be no communications in or out of the affected area. This would prevent mass hysteria and would give valuable time to authorities.

There is a wonderful depiction of sectionalization happening in the movie 2001. In that case, the monolith is discovered on the moon. All communications to and from the moon are sectionalized so that information can be contained. This is an important part of the plot in the movie. It was reflective of the time, that sectionalization was even planned into the phone systems into the future.

Today, sectionalization is mostly a mess in the classic sense. There is no “Line Load Control” panel. Individual phone lines are not typically classified. All VoIP lines are dumped into the “C” classification. However, traditional Central Office lines and cell phones are still prioritized as “A” through “C”. The term used today for “A” priority is “Essential Service.” A hospital will have many “Essential Service” lines. Corporate Executives, politicians, and individuals identified on VIP lists will be granted Essential Services. Major businesses usually are given just a few “Essential Service” lines…typically 2% of the total number of lines they have.

So, if there is an emergency that swamps the phone system, locate your doctor as they can likely still make calls on their cell phones. (By the way, the doctor won’t know they have essential service. You can’t ask for this special treatment. It is granted to you by the phone company, usually automatically. This is one of the many reasons that they ask for your social security number or major identification when subscribing to a new line of service.

So, back to the internet.

Communications systems have had sectionalization since almost the beginning. Certainly by the 1920s it was well established. In light of the massive, wholesale eavesdropping by the US on the entire world it is quite conceivable that the internet will be sectionalized. Governments simply need to control their people, and they need to prevent wholesale monitoring by others.