Scoping Out Microsoft’s Next Possible Acquisition

Scoping Out Microsoft’s Next Possible Acquisition Taking a gander at possible acquisitions that could benefit Microsoft’s UC&C offering.

Taking a gander at possible acquisitions that could benefit Microsoft’s UC&C offering.

Microsoft’s decision to acquire LinkedIn was a big surprise. The strategic fit has become clear, but at the time it didn’t seem like either company was in need of the other. It got me wondering about the next logical acquisition for Microsoft, specifically from a UC and collaboration perspective.

To date, Microsoft has made seven acquisitions in 2016. That’s at about the same rate as last year, when it acquired 15 companies. In reviewing these acquisitions, it appears Microsoft is less focused on new specific products or services and more attracted to companies that broadly strengthen its portfolio.

Microsoft continues its transition from provider of desktop and server software to a cloud- and mobile-first company, and its recent acquisitions complement that journey. For example, LinkedIn provides Microsoft a cloud directory, Solair expands Microsoft Azure-based Internet of Things (IoT) services, and with Swiftkey Microsoft improves its mobile development capabilities. 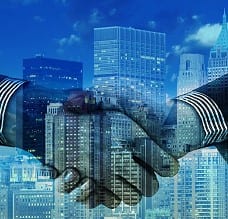 Microsoft already has a strong UC&C offer that includes Skype for Business, which integrates tightly with Office 365 — Exchange/Outlook, Office productivity apps, Yammer, and new apps such as Delve and Graph — and supports federation with consumer Skype for inter-organizational rich communications. Skype for Business continues to lead the industry in growth.

I started with considering the partners that commonly complete a Microsoft UC&C solution. Polycom, for example, often provides the endpoints in Skype for Business deployments as Microsoft is one of the few UC premises-based vendors that does not make its own phones. However, an acquisition seems unlikely as there is no apparent market gap, and Microsoft doesn’t likely see long-term strategic value to phones.

On the other hand, a Microsoft-branded contact center could strengthen the portfolio. Genesys is a reasonable contender since its CX Platform has a strong integration with Skype for Business and is in use by Microsoft internally. However, Microsoft may be concerned that Genesys serves a broader market than just Skype for Business users.

I could also see Microsoft strengthening its hosted collaboration offering by acquiring Velocloud or other a software-defined WAN partner, though it’s still early in that game. Many UC vendors have integrated new workstream messaging capabilities, and at one point Microsoft was rumored to have considered acquiring Slack, walking away possibly in favor of investing in Skype for Business. Providing Skype for Business (or Yammer) with a conversational UI may have been the motivation behind Microsoft’s recent acquisition of Wand Labs, which brings “expertise around semantic ontologies, services mapping, third-party developer integration and conversational interfaces,” as noted in a Microsoft blog.

I can see lots of acquisition options, but Vidyo is one potential that stands out. Vidyo provides video communications applications and toolkits. The combination of Skype for Business and Vidyo could strengthen the offerings of both companies. Here are some reasons why:

Microsoft could accomplish all of the above without acquiring Vidyo. It could develop these video capabilities internally. Microsoft already has video conferencing capabilities such as auto-pan, LRS, and the Surface Hub. What’s more, acquiring Vidyo would create short-term confusion regarding existing partnerships. However, that might take a while.

Confusion about Microsoft’s approach to video exists now. Interoperability has been limited, and partners and products have come and gone. The approach to room systems has transitioned from LRS (abandoned?) to the Polycom RoundTable 100 (killed prior to launch) and Surface Hub (more than a year late). Acano was building momentum as a Skype for Business gateway, but is now a Cisco company. Adoption of WebRTC is slow and in process. In acquiring Vidyo, Microsoft could quickly address all of these issues, create competitive disruption, and offer benefits across the portfolio.

Obviously this is just speculation — if I were privy to any such acquisition plans I’d be sworn to secrecy. But openly speculating about such combinations is fun.

It’s all about experiences. That was the theme of Avaya Engage #ExperiencesThatMatter.  I attended the Avaya Engage conference this month. This event is part user group (IAUG) and part Avaya Expo event. The last one I attended was in January…