I am surprised how much video is working its way into our routines.  I think we are on camera more than we are not.

How many cameras are pointing at you right now?

As I type this post, there are three cameras pointed directly at me (that I know of). My primary computer is a notebook with a built-in webcam. On top of my other monitor is my FreeTalk Skype HD camera. To my left is my Polycom VVX 1500 video phone pointed directly at me. Even though all of these are supposedly off, I prefer to cover them when not in use. Only the Polycom has a lens cap.

Camera’s and speaker-phones being off is something that I some times doubt.

How many video cameras do you own?

In addition to those above, I have several older webcams retired in drawers. I have four digital cameras that can take photos and videos. My older laptop has a web cam. We own a Flip. We have a Sony hard disk Handycam, a few more active USB cameras on other computers. We have four active mobile phones each with a camera, and a few in a pile that aren’t being used any more. I actually have a DVR and several cameras I intend to hang up outside the house, but haven’t done so yet.

How many camera’s are currently on your shopping list?

We plan to buy a new TV – it will likely have a Skype Camera built into it. I intend to get a new mobile phone soon which has one. My kid wants a Touch, which will have two. Probably going to get a new car later this year and it will probably have a reverse camera. There will be at least one tablet purchased in this house which means one or two more depending on the model.

Compare that against some things that may be losing popularity… how many corded home phones do you have? How many televisions? How many pagers?

Cameras are everywhere – and like Tribbles, they are multiplying.

But wait, there is more. Check out these video related stories:

1) The Disney Cruise ship: The Dream

Normally, I would link to an article, but a video just seemed more appropriate for some reason.

This ship has some remarkable video technology – interactive and enchanted art, video window simulations, and video portholes. The video window is very clever and Disney is using them to make windowless staterooms more attractive. From Wired:

Each stateroom will have a 30″ round HD screen mounted on one wall, feeding live video from a series of cameras mounted around the perimeter of the boat. No matter what direction the Dream is sailing, or what time of day, passengers will see what’s visible outside in the specific direction they are facing in the stateroom, as if they were looking at an actual porthole.

But why settle for a 30” round porthole window? This is about as close as you are likely to get to Star Trek Holodeck. Disney put large fake windows in its windowless bar that can change locations so you don’t need to visit the same bar every night on a multi-night cruise. Again, from Wired:

The Skyline lounge (for grown-ups only) has it’s own cool piece of technology, not unlike the virtual portholes. It has no actual windows, but has screens where windows would be behind the bar and on the opposite wall. The screens project what the view would be like if you were sitting in a lounge at the top of a skyscraper in one of many cities around the world. The city will change from time to time, and the view will always been time-accurate.

The city view seems a bit odd in the middle of the ocean, but then a midnight view in the middle of the ocean can be pretty boring. I like the notion of video windows and I think it could revolutionize many things beyond cruise ships. What a great idea for offices, homes, or businesses that just don’t have windows or pretty views. The idea of being able to recreate actual lighting and orientation to be the same as outdoors is brilliant. Disney says there is more interest in their windowless rooms than real windows…. real windows don’t have Disney characters and can be really dull in heavy fog.

In an effort to prove that its burgers are made to order, BK Brazil experimented with putting a snapshot of the person ordering on its burger’s wrapper. This is a concept taken one step further than McDonalds which takes order photos without revealing it. In The World is Flat, Friedman explains how some McDonalds drive thru’s are hosted by a call center in Colorado Springs, and not by someone inside the restaurant. It turns out hiring people that can understand orders and speak clearly is hard to do. A call center can be do it more effectively and efficiently, and to minimize the risk of mismatching orders and customers – a hidden cam takes a photo of the person ordering. That photo is displayed to the person that hands out the food as a simple quality check.

Burger King cleverly puts the photo on the wrapper, so it is clear the Whopper was made to order (the campaign was called Whopper Face). It really is very clever, but unlikely to see the light a of a shutter in the US. 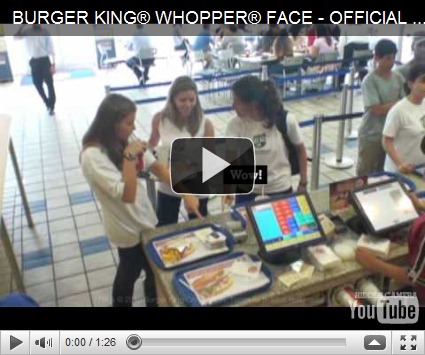 The video shows all the potential fun and laughs, but it isn’t that simple. One problem is the person that orders isn’t always the person that eats it – and no one wants to eat a burger with someone else’s photo. Photogenic folks probably love it – but the loyal Burger King customer probably isn’t that photogenic. Do they really want to remind the customer of their looks before serving them a Triple Whopper with 76 grams of fat and 51 grams of carbohydrates?

On area where video is just getting interesting is in the world of augmented reality. This space is booming with incredible innovation that will change the way we do things. Going back to the fake windows above, it can’t be much longer for fake windows to replace real windows in critical locations… say cars. An AR windshield, with navigation, dashboard controls, and other relevant information could make clear glass windshields down-right primitive. For some interesting examples in AR, click here.

4) Video Not to Watch

Video doesn’t have to be seen to be useful. At the last VoiceCon show, NEC displayed some very interesting video technology in their booth. The display was for entertainment purposes, nothing to do with its enterprise voice solutions. Their camera, combined with some very sophisticated face detection software determined each guest’s age, gender, and race. With shocking accuracy. This reporting makes watching the video pretty useless. It has lots of potential applications – say a new display ad at the airport – a hidden camera like this could provide the advertiser with detailed demographics about who stops to read the ad. A camera connected to a cash register could provide detailed spending demographics at a popular retail location. This type of research used to require some sap to watch these videos… not anymore. In fact, the notion of sampling could go away – just record everything.

Well, normally this blog talks about voice technologies – and my point here is that the voice conversation is increasingly shifting to video. Video phones, video chats, video bridges, and video collaboration. Not so long ago, video seemed pretty sci-fi – and that’s my point. Video is here. Video is everywhere and there is a good chance there is a video cam pointed at you right now.

Putting a strategy around video communications isn’t something that voice traditionalists can ignore any further. It is no longer a future thing. It is here. Apple’s FaceTime, Skype’s video bridge (10 way!), Google’s video coder… all geared at consumers are here today. These devices are not just for pictures either… bar code scanners, motion detection, much more. I find it shocking, but video is actually moving mainstream faster than I ever anticipated. For as long as I can remember, video was a curiosity for the rich – oh the good ol days. I remember when cell phones were a curiosity for the rich too (late 80s).