About a year ago, we wrote about the hybrid cloud opportunity for traditional business telephony vendors that have added hosted unified communications (UC) services to their portfolios of IP-PBX, contact center, messaging and other on-site telephony-related solutions. These vendors see the value in offering flexible deployment options such that their customers can select on-premises equipment or hosted/cloud services according to their particular business communications needs and requirements. 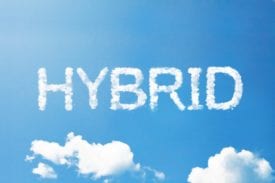 Moreover, these vendors are in the perfect position to offer a hybrid solution that offers business customers (1) the flexibility in subscribing to hosted/cloud services for some applications and using on-site solutions for others and/or (2) the ability to network the two solution types (cloud and on-premises) with extension dialing and feature parity across all locations regardless of the deployment. Most of the vendors on our radar are offering some cloud-based applications, but not all have yet addressed a full hybrid networking scenario.

Recent market studies validate the shift toward hosted/cloud UC in general, but also highlight a growing preference for “hybrid cloud-premises” implementations. A 2015 IDG Enterprise survey finds the number of small and mid-size businesses (SMBs) and enterprises planning to implement a hybrid UC&C model is rising, citing that 54% of enterprises and 42% of SMBs in their survey are preparing to do so in the next two years (compared to 30% and 27% using a hybrid approach today).

A hybrid cloud-premises telephony and UC solution can ease a variety of business challenges. For example, a business with an existing phone system on-site may find that subscribing to a call recording service or a hosted contact center capability is far more convenient than actually installing additional hardware and/or software for these applications. Or, perhaps a company wants to continue running a critical business application locally while taking advantage of a pay-as-you-go hosted service for telephony call control. Or, consider a larger, distributed enterprise that has significant investments in telephony equipment. Here, a staggered transition with deployments of hosted/cloud services for remote sites while continuing to use existing premises-based telephony systems at main locations will likely make the most sense.

In our research last fall, we highlighted new hybrid cloud-premises solutions from Alcatel-Lucent Enterprise, NEC, Tadiran Telecom, ShoreTel, Toshiba and Zultys (you can read about these here). Since then, many more hybrid cloud solutions have entered the market from the vendors we track, including from 3CX, Avaya, Cisco, Digium, Microsoft, Mitel, NEC, ShoreTel, Tadiran Telecom, Toshiba, Unify and Vertical. Below are some of the 2015 entries.

3CX announced the general availability of a new software version for its software-based 3CX Phone System for Windows. Version 14 introduces a wholesale hosted/cloud offer for 3CX channel partners that can now provide both a hosted and an on-premises phone system based on the same platform, including hybrid arrangements. In addition, 3CX released a WebRTC-based version of its WebMeeting service, offering unlimited Web and video conferencing for one yearly price depending on number of participants (10-100); the solution can be deployed as an on-site server or accessed as a hosted service. See the write-up 3CX Announces Wholesale Hosted PBX Service with V14 for details.

Avaya is addressing the hybrid cloud opportunity with new partnerships and services aimed at businesses transitioning toward a public cloud delivery model. Among these partnerships is Customer Engagement OnAvaya™ Powered by Google Cloud Platform. With this collaboration, Avaya’s IP Office Contact Center technology is now offered as-a-service for a monthly subscription fee through Google Cloud. See the write-up Avaya and Google Partner to Offer Cloud Contact Center for SMBs for more detail.

Additionally, Avaya can leverage its expertise in traditional, on-premises telephony solutions to offer hybrid cloud-premises configurations. A hosted version of Avaya’s IP Office, now available from distribution partners in several countries, will be able to support hybrid configurations in which earlier on-premises IP Office control units function as gateways to tie-in existing analog and digital equipment already owned (this capability is on the IP Office Cloud roadmap planned for the first half of 2016). For the enterprise, Avaya is partnering with cloud infrastructure provider Spoken Communications to offer a hybrid cloud Contact Center as a Service (CCaaS) solution for the enterprise and with VMware to offer Avaya customer and team engagement applications as-a-service hosted on the VMware vCloud Air platform. The AvayaLive Video service is available to any size business and offers a conference room in the cloud for up to 25 participants per room.

Cisco has been extending the features and functionality of its cloud-based team collaboration application, Cisco Spark. In early 2015, Cisco incorporated new features, added additional device support (most features are available for iPad, iPhone, Android, Windows, Mac and Web) and began offering Spark as a free version with limited functionality (e.g. one-to-one video calling and 3-party meetings) or as a monthly subscription with additional functionality such as room moderation, directory sync and broader meeting capabilities. The latest development, just announced in December of 2015, takes Spark to a whole new level, making it a Unified Communications as a Service (UCaaS) contender with built-in messaging, meeting and calling functionality. The new Spark will also support hybrid configurations that allow the cloud service to interoperate with existing premises-based solutions; three Spark Hybrid configurations will be available in early 2016: Calendar Service, Call Service Connect and Call Service Aware, with more to follow.

Digium introduced the Switchvox Rescue disaster recovery cloud service for customers that have deployed the on-premises Switchvox business phone system (requires the latest Release 5.11 software or higher). The service protects against unexpected downtime by providing a temporary backup system hosted at a Digium Cloud Services datacenter. A recent copy of the Switchvox configuration is maintained in the cloud, and upon notification by the customer, this system can takeover in the event of an on-site outage. Switchvox Rescue is available to order for $90 per month (an introductory price of $45 per month is available for a limited time).

Microsoft has been previewing three Skype for Business services for inclusion in its Office 365 hosted offer: Cloud PBX (Microsoft’s Skype for Business/Lync enterprise voice features), PSTN Conferencing (a traditional dial-in capability) and Skype Meeting Broadcast (for large virtual meetings with up to 10,000 participants). A new E5 enterprise plan was officially announced in December and includes support for these Skype for Business services, along with new analytics and security features. In terms of hybrid cloud implementations, Microsoft customers that upgrade to the latest premises-based Skype for Business Server will be able to take advantage of the subscription-based Meeting Broadcast cloud service – a hybrid server and cloud approach. Per Microsoft, hybrid models will also be possible such that customers with a Skype for Business Server deployed on-premises can use that software to connect the customer’s PSTN environment with Cloud PBX; additionally, customers can operate with some users hosted in Office 365 and other users hosted on the Server.

Mitel continues to evolve its MiCloud hosted business services portfolio in 2015, enhancing features and functionality and expanding market opportunities (see Mitel MiCloud Hosted Services Offer Multiple Market Opportunities). The company’s MiVoice Business software (formerly Mitel Communications Director or MCD) is the base software for Mitel’s on-premises IP-PBX and its MiCloud hosted offer, making it possible to configure a hybrid scenario with portions of the solution implemented on-premises, and other portions deployed in the cloud. Mitel cites support for hybrid cloud deployments since 2010 when it first introduced the virtualized version of the software. Mitel’s MiContact Center Live Service also creates a hybrid opportunity as the solution goes “over the top” of any existing telephone platform, allowing businesses to subscribe to a cloud-based contact center service regardless of their current on-premises IP telephony platform.

NEC’s UNIVERGE Cloud Service Contact Center is new in 2015 and delivers a suite of cloud services that includes inbound multi-channel communications, outbound dialing, intelligent routing and queuing, self-service via Interactive Voice Response (IVR), multimedia recording, quality monitoring, real-time and historical reporting and more. The subscription-based contact center service can be deployed as a public cloud offering (hosted in an NEC data center) or as a privately managed service (hosted in an organization’s own data center). It is closely integrated with NEC’s unified communications-as-a-service (UCaaS) cloud-based solution, but can also function with an on-site system such as NEC’s UNIVERGE 3C or with the NEC SV9000 communications server or even an IP-PBX system from another vendor via SIP trunking. The cloud solution is available as of April 9, 2015 in the United States (other regions will follow). See the write-up NEC Introduces Contact Center in the Cloud for more detail. The new hosted offer joins the previously-introduced cloud-based meet-me audio conferencing service.

ShoreTel has begun the phased rollout of its newly developed platform, ShoreTel Connect, which will function as a common platform for cloud, on-premises and hybrid deployments. Partners are now officially quoting the following: a new on-site IP-PBX (Connect ONSITE), a new cloud-based UC service (Connect CLOUD) and a new multi-channel contact center solution (Connect Contact Center), as well as cloud-based applications for customers with premises-based system deployments (Connect HYBRID Apps). A hybrid networking capability that enables the networking of cloud and premises deployments (Connect HYBRID Sites) is expected at the end of this year. See the write-up ShoreTel Addresses the Hybrid Cloud with New Connect Platform for more detail.

Tadiran Telecom recently announced that its Aeonix software-based Unified Communications and Collaboration (UC&C) platform is available as a multi-instance cloud-based solution running on Amazon Web Services (AWS). Tadiran Telecom customers can now opt to access their telephony and UC as a convenient subscription-based service, eliminating the expense and hassle of purchasing, deploying and maintaining a telephone system on-site. Multi-site organizations can take advantage of a hybrid cloud-premises arrangement by deploying Aeonix servers at some sites and utilizing hosted/cloud services at other locations. See the write-up Tadiran Telecom’s Aeonix UC&C Hosted on Amazon Marketplace for more detail.

Toshiba America Information Systems Inc., Telecommunication Systems Division announced common management across its cloud and premises-based solutions with the latest version of its Enterprise Manager browser-based administration tool. With Release 1.6.2, customers that deploy Toshiba’s VIPedge cloud unified communications service or the IPedge IP business communication system, or a hybrid network that includes both solution types, can use the same management software (previously, these solutions used different versions of Toshiba’s Enterprise Manager for administration). Since Toshiba’s cloud and on-premises solutions are based on the same software stream, customers use the same phones and endpoints, the same functionality and now the same administration software whether the organization utilizes a cloud, on-premises or hybrid deployment.