The concept of Google’s newest email feature – Priority Inbox is fairly simple, but I have my doubts about its usefulness. If you are not familiar with the feature, take a look at this simple video. 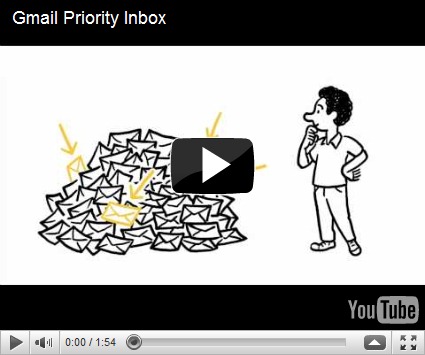 It is a SPAM filter in reverse. Google does a very good job of identifying SPAM. Not only does it keep most SPAM out of my inbox, but it doesn’t put very many “false positives” in my SPAM folder. In fact, when someone tells me a message got accidentally caught in the SPAM filter, I am certain they are not using Gmail or Google Apps. But finding things that are not important is very different than finding things that are important. Can Google do it?

It is logical to assume that since Google has the right tools to identify SPAM, they can identify important stuff. But they really are not the same tools. To the right is a short Google video on how it catches SPAM. 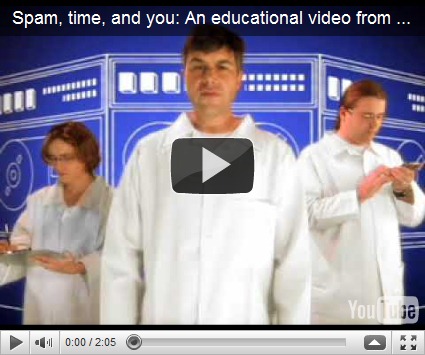 The video doesn’t provide much detail, but does mention three tricks of the trade; the “Report SPAM” button, rigorous checks, and OCR.

The Report SPAM button is brilliant as it leverages a capability most SPAM filters don’t have – a networked group of users. By hitting this button, you are telling Google that a human is verifying it is SPAM. It would not be in the inbox to begin with if the automated systems had caught it. If enough people agree with you on this SPAM finding, Google will look for near identical email’s and SPAMify them. I assume the number of votes required depends on how fishy the automated systems measure the message.

The rigorous checks part of the video was a bit high level for me, but again, the goal is finding SPAM – not authentic email. There are certain things they can do like check the domain name against the actual mail source – or the DIsplay name against the Reply to. They can scan for known culprit addresses, names, or content. Most SPAM filters apply these measures.

The OCR means that Google can read the text in images. This was an early way SPAMMERS got by keyword filters and a problem for many systems as OCR software may not be installed on a desktop client or Server. Google scans the messages on their servers, a nice benefit. But they are scanning for known keywords often linked to SPAM.

None of these tools can work with finding important email. The network effect won’t help as what designates importance won’t likely be consistent among users. That’s why there is no “Report Priority” button in Gmail. Keywords are not likely to work for filtering either. Lots of things are important to me – it would be impossible to build a list. A fairly simple task for SPAM as most SPAM falls into a handful of categories.

I get my voice mails in my email too. Will Google look at the callerID in the message or perhaps even play the .WAV file and look for keywords in a transcription?

The idea of the SPAM filter is out of sight and of mind. But Priority Inbox isn’t intended to work that way. The theory is you have so much mail, that you want to peruse the important stuff first, and then sort through the rest. I can see that. I don’t think I get enough email to realize its full value, at least not daily. Might be really nice after a few days away from the computer. But when I read an article like this one from TechCrunch by MG Siegler, I get worried: “I’m so addicted, that the few times I’ve accidentally clicked on the old “regular” Inbox view in the past week have really annoyed me. So much so that I actually moved that view into my “more” drop down”. I’ve never sent MG Siegler a note before, but I have little reason to believe that if I do, he will ever see it. The very notion of checking his regular inbox is so upsetting that he had to hide the option. That spells trouble to me.

That leaves “rigorous checks”, but new kinds. Now they need to check new things like if it is someone I normally converse with. But the fact is, I get lots of important emails from folks I don’t normally converse with. “Hi Dave, we haven’t met, but I want to hire you on a project”. I love those emails. I am trying out the new Gmail Priority Inbox feature, but so far I am not that impressed. But they say it gets smarter as you teach it.

I am teaching it, but I don’t see a pattern emerging. I went though some of my mail searching for a pattern, and I don’t see a way to reliably identify important messages. Sure there are some folks I regularly respond to – but if it is based simply on sender that’s an easy filter to set up. In fact, I do have a filter set up to identify one person’s messages.

Recently, I had a legitimate email caught in a colleague’s SPAM filter because I used some profanity in the message and the word “anal”. I find myself avoiding such words now to avoid having my messages quarantined. Will people start using specific words to ensure messages get promoted to the priority box – and if so, what are those words? I guess they may be different for every person, but it might be fun to try guessing. And will those words be the same words on the SPAM filters? “Hi, I want to give you money and a new watch along with so much pleasure that you will lose weight” – SPAM or priority?

Bottom line, automated filters rarely are successful. Especially new ones. The Google SPAM filter is the best I’ve encountered and maybe Google can figure out how to reverse it – more power to them. For people that receive more than a couple hundred messages a day, it is probably a very worthwhile tool. But I don’t see how it can be reliable enough to ignore the other inbox.