Movies have Oscars, Music has Grammys – I am launching the VoiceCon Disconnects. These are my awards for the disconnects between reality and the show. This is a less crowded topic as so many (including myself) have written about the great parts of VoiceCon.

Worst Keynote: Five VoiceCon keynotes were delivered by Avaya, Siemens, Cisco, IBM, and Microsoft. All of them were delivered professionally by polished executives. There were no disaster’s like IBM’s demo failure of VoiceCon Fall (2009) – though the premature ejaculation of the Siemens smoke machine will be remembered (especially by Avaya). So with no ringers, I had to search deeper…as in a blown opportunity. The keynotes are a fairly major event – there is no concurrent programming, and the captive audience of competitors, employees, media, analysts, and customers is in the thousands. The keynotes are a time to set the brand apart.

So with that in mind, I present the Disconnect for Worst Keynote to Kevin Kennedy of Avaya. Kevin took most of his keynote time to discuss the benefits of SIP. The presentation was excellent, but would have been more appropriate five years ago. To be fair, it started nicely, but quickly fell apart after discussing entropy.

The lost opportunity of the presentation was it missed what the audience really wanted to hear – about the synergies of Avaya and Nortel, about the surviving technologies and the methods behind the new road map. About what it is like for the #3 market share leader to acquire the #2 leader via bankruptcy auction. What Avaya learned from Nortel’s employees, customers, and dealers. About the inner workings of private equity. About the synergies and complexities of Skype being under the same parent ownership. About the human challenges of integrating fierce competitors into a single organization. About how Avaya, a traditional telecom equipment maker, will compete against IBM and Microsoft on IT terms.

There was some optimism in Kennedy leaving the end open for Q&A.; It was considered a unique move showing his willingness and desire to connect to the audience. But I think it was more that he ran out of things to say about SIP.

Keynotes should be more about vision than product demos and technical tutorials. Kennedy had a great opportunity to truly unveil a vision on the audience, but instead delivered the depth of a motivational poster – on SIP. 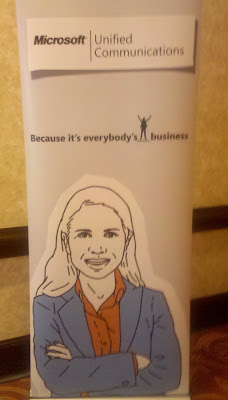 er: Signage isn’t limited to the exhibit hall. The Gaylord Palms was adorned with voice related banners and signs throughout. Avaya clearly dominated the signage category in general – so much that the Gaylord Atrium was in perpetual shade. The Disconnect for Worst (non-booth) Signage goes to Microsoft. I don’t know what this sign was supposed to suggest, but I found it frightening. Don’t let the cut and paste graphics fool you, it was actually designed and printed that way.

I realized we were in Larry Ellison’s cloud hell where everything and anything is cloud. I tried to steer the conversation a bit with “What’s new? I had all this 20 years ago with AOL” – but it was a tough panel. I correlate virtualization with cloud telephony, but this wasn’t a virtualization panel. This panel was way too diverse for a write home cloud discussion.

Dialed Wrong Number Disconnect: This award recognizes the vendor that harps the wrong message. An example might be KFC emphasizing health benefits of transfat-free deep fryer oil, or Winnebago bragging about its fuel efficiency. Those are important messages, but it’s the wrong key message. I present the Dialed Wrong Number Disconnect to Microsoft.

Microsoft’s OCS product is impressive in many ways. In only its 2nd generation its impact is phenomenal and it appropriately challenged many long held beliefs. The product offers significant features, it penetrated the enterprise with impressive wins, it built a strong following of customers, analysts, and dealers, and continued to shake things up with a sneak peek of its next release. There are so many great things to say about OCS – but Microsoft instead offers some silly and misleading statements.

Microsoft chooses to differentiate OCS by continually stressing that it is a “software based solution”. There is no dispute that OCS is a software based solution, but so are those of its key competitors. It seems like an awfully silly thing to hang a hat on. Consider Avaya, the largest of the traditional players, their call control and applications run on industry standard servers made by Dell, IBM, and HP. Neither Avaya or Microsoft manufacture phones directly. Avaya has them made and branded. Microsoft specifies hard and soft components and licenses them to manufacturers. Both firms promote SIP trunks to eliminate the need for TDM ports. Both offer software based solutions as does Cisco, Mitel, Siemens, Digium, and many others.

Microsoft also claimed (via Alan Sulkin’s RFP) to be “half the price” of competitive offerings. First, they weren’t half the price, secondly, is price really the differentiator Microsoft wants to lead with?, and finally the statement was misleading on multiple fronts. Other vendors bid standalone IP phones, Microsoft bid USB devices that only work when connected to a logged-in PC. Microsoft omitted in its response a few key components:

The pricing does not include Microsoft Active Directory, System Center Operations Manager, Exchange, or Office Professional Plus, nor does it include the hardware load balancer shown in the system configuration diagrams.”

I understand the logic, but it gets slippery very quickly. Siemens, for example, supports a VMware virtualized environment, would it be reasonable for them to omit the server infrastructure in their bid? Exchange was omitted, but with Wave 14 Microsoft recommends dedicated Exchange Server(s) for voicemail.

Which brings me to Microsoft bidding unreleased (no date set) software. Significant portions of Wave 14 (features, pricing, architectural changes) are unknown at this time. It seems a bit unreasonable to bid vaporware and future (fictional?) pricing and very unreasonable to compare against currently released products and pricing.

Most Ignored UC Solution: Unified Communications has come a long way in just a few years. There was much less conversation about what is UC at this event than usual. Unfortunately, there wasn’t a lot of progress made around some of the core UC applications over the past year. The big disappointment was mobility. As a result, the Disconnect for the Most Ignored UC Solution goes to Mobility. Over the past year, mobility has clearly become a major driver in UC deployments.

There were a lot of technology improvements, so I expected to see some new products. Consider location aware applications such as Foursquare and Latitude that use GPS and cellular triangulation. WiFi makers unleashed the long awaited 802.11N on the enterprise. At last year’s show, several players were embracing cellular phones (as extensions) not to mention FMC technologies and cell phone clients. Or skip FMC with femtocell technologies which started to appear over the past year.

However, at VoiceCon the mobility offerings were largely unchanged from last year. No one had an 802.11N phone. Motorola had a new SIP based WiFi phone, but none of the “voice” vendors had any new (WiFi or Dect) wireless offerings. Points to Siemens for showing cellular location (via Latitude) on their presence dashboard. And points to Microsoft for LAN location awareness by MAC address (similar to Cisco). But for the most part, it was as if the vendors figured Mobility 1.0 was sufficient despite the rising bar in the consumer/mobile space. I think this was a fairly significant disconnect worthy of an award.

Evidently Hype Disconnect: I’ve raised some doubt about the hype associated with 2010 being the big year for hosted voice. Hosted voice has been a popular topic in the media and there were even some VoiceCon panels dedicated to the topic. Futher, several of the vendors on the exhibit floor have new service provider offerings (yes, for hosted plays but to them it is just another equipment sale). But what wasn’t there were hosted providers courting enterprise customers. I didn’t see a single hosted voice offering on the floor. Hosted voice is making significant inroads into SMB – but it was clearly missing from VoiceCon’s exhibit hall. I present the Evidently Hype Disconnect to Hosted Voice, but perhaps 2011 will be the big year.
Most Hypocritical Disconnect: This goes to all the keynotes (all 5) regarding their demonstrations. Voice systems have always struggled with intuitive interfaces largely due to the form factor of the telephone – buttons like ‘Flash’, ‘Release’, even ‘Conference’ can be intimidating (and who put 24 letters of the alphabet on the dial pad?). Two things are improving the situation; new phones with large contextual screens and softphones with even larger screens and full keyboards.

Every keynote demonstrated the flexibility and intuitive nature of their products in legitimate business scenarios. But none of the senior keynote executives performed the demos. The technology remains more complex and intimidating than most executives will admit. I’ve said it for years – I want to see non technical executives do their own demos (a la Steve Jobs) or perhaps call someone up from the audience. The technology is meant for everyone, including senior executives. Cisco’s demo involved moving an HD video call from a softphone/PC to a video-phone to a cell phone – all with the push of a button. But that button was pressed by Cisco’s “Chief Demonstration Officer” (I kid you not). Gurdeep Singh Pall actually left the stage during Microsoft’s Wave 14 demo. A few of the vendors involved executives in their demos, but generally on the simple end of the call. My blood boils (with industry shame) when I hear someone say “I am not sure how to transfer the call, so sorry if I lose you”. I contend that if a CxO can do it, so can we.

I would like to thank my mother and so many others, but I hear the music on-hold playing and that’s my queue to go.