Plantronics started shipping its newest UC bluetooth headset known as the Voyager Legend. It is basically an updated version of its Voyager headset (which was my previous favorite).

What’s new? Smaller (25%) and lighter, splash resistant, 3 mics and improved noise cancellation, and a better layout. The power, +, and – buttons are now on the same single visible plane. They also added a mute button. 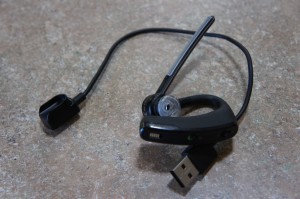 I have a lot to say about mute. The best time to use a headset is on long conference calls which makes mute my favorite headset feature. Mute isn’t a dedicated button on most headsets. It’s usually part of a multi-function button usually involving some sort of dance of taps, double taps, and holds. A) I can never remember the routine and B) I never know if I got it or not (as I don’t speak Chirp).

This headset actually has a mute button on the boom, and it says in your ear “mute on” or “mute off.” No calisthenics, and it doesn’t incessantly beep to remind you. If you forget if the mute is on, instead of saying “can you hear me?” just press the button to toggle the mute and hear the results. Brilliant.

Yes, the headset actually talks and listens. It verifies the connection, speaks the battery status, and supposedly announces the caller’s name (I could not get this to work on my Android). You can also speak to “answer” or “ignore,” and issue voice commands to the mobile phone. I had trouble dialing through voice commands, which does works fine without the headset.

The presence sensors work great. It knows if the headset is on. It actually opens this information to other systems via four APIs (Mobile Call State, Mobile Caller ID, Proximity, and Wearing State – see developer.plantronics.com). The practical element is that it routes audio to the headset only when it is on a head. That means you can keep it paired and on – in your shirt pocket – and after answering the call on the handset seamlessly don the headset without missing a beat.

The headset also supports A2DP, which is bluetooth code for the ability to play music on an voice headset. It’s mono but still very practical. For example, I wore it while walking the dog and listened to a podcast. The button on the headset acts like play/pause, or simply removing the headset will also pause audio. Even better, you can get navigation prompts quietly in your ear while other passengers don’t know you are cheating.

It utilizes bluetooth 3.0 and will pair to multiple devices. However, many of the advanced features are not widely supported on desktops and laptops. The upcoming UC version of this product will include a USB Bluetooth dongle that will provide a more robust solution for desktop and notebook users.

What I don’t Like
I have two complaints about this product.

First one is the power charger. Plantronics designed a new USB power cable that connects to the headset with a magnetic interface. Why? Apple addressed a real problem with the magnetic coupler because people put their laptops on tables and plug-in across the room. When someone trips over the cable, the laptop flies off the table and breaks. First off, I don’t mind if my headset flies off the table as it is very light and unlikely to get damaged. But that is not even relevant because this new cable with the magnetic coupler is only 11” long anyway.

Even at 11”, does Plantronics really expect me to carry a new dedicated cable in my bag? This is one of the key reasons I don’t carry an iPad, and those that do carry one definitely don’t have room for another cable. The over-engineered magnetic coupling power cable, which does not actually solve any problems, makes this device fairly useless to me. However, Plantronics is going to release a travel case in January that 1) Uses a micro USB 2) has an additional battery to recharge the headset 3) includes a USB Bluetooth adapter to make the headset more laptop friendly. So with the case, this looks like a winner.

My second complaint is the packaging – and this applies to all of the Plantronics products I have seen. Plantronics lives in a retail 1.0 world even though the vast majority of us are not buying these products from an in-store display. Points for using largely biodegradable materials, but an unbleached padded envelope would have been sufficient. The amount of waste it comes with feels high for such a lightweight and small device. I include in that waste the AC USB adapter. It works fine to charge the headset, but it does not have enough power for a phone or tablet. Again, not going to carry more than one and this one isn’t it.

All in all an impressive device. I really do like the on-head sensors (what Plantronics calls Proximity). I hope they bring that technology to their desk headsets. I prefer a DECT headset in the office, but the Legend has me questioning my loyalty.