Yes you read that title right – Dave is optimistic.

I get called a lot of things, but being described as an “optimist” is not something I hear. Actually, I’m more like the guy that ordered the Cheeseburger. What can I say other than my favorite Dr. Evil quote: “I’m surrounded by frickn morons.”

Nonetheless: I’m very optimistic about enterprise communications right now. This is new. For the past several years I’ve had this nagging feeling that the industry was stuck. That there was too much regurgitation of saving money with SIP, work from home, and make work calls on your cell phone. No wonder the industry has been experiencing consolidation. 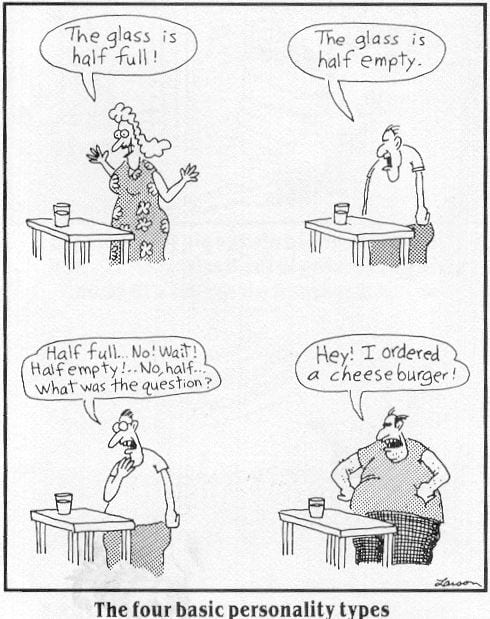 But, recently I’ve been feeling better about things. I’m seeing some real innovation again. It’s palpable. I sit through 2-3 briefings a week and I’m hearing new ideas and seeing fresh approaches.  Yes of course there’s still a lot of bullshit too, but that’s expected. Protein is best served with carbs.

A few months ago Twilio was touting that it expanded from two product lines to ten in 18 months. Since then it launched Programmable IoT and acquired Kurento. The Twilio IPO was a game changing event. I’ve had a lot of conversations about the intersection of CPaaS, UC, and UCaaS. The known players such as Genband and Bandwidth are creating unique value on their own. There’s been lots of activity from the UC side including Cisco acquiring Tropo, Vonage acquiring Nexmo, Avaya launching Zang, and ShoreTel launching Summit.  We are entering stage 3 of UC and CPaaS:. Stage 1 was when the industry ignored Twilio. Stage 2 was interest and imitation. Stage 3 is simmulation with differentiation. I think Twilio sees the UC industry in the same way a horse sees flies.

The second most common conversation topic (and medium) is video. Suddenly the video industry has swagger. Perhaps it’s because both Cisco and Microsoft now treat video as a central part of their solutions. WebRTC is also building momentum and appears poised to exit its science fair stage. Polycom has a new lease on life. Pexip got a shot in the arm when Cisco acquired Acano. Cisco itself is rapidly converging Acano, WebEx, Telepresence, and Spark into a single experience. Microsoft is shipping the Surface Hub (and people like it). Here’s proof that video is heating up. I normally have a video meeting for every 3-5 UC meetings. I have the following in-person meetings scheduled to take place in the next 30 days: Vidyo at HQ, Polycom execs and event, Pexip, Logitech, and a tour of the Cisco video lab (in Oslo).

I love workstream messaging, and it’s amazing how far it has come in the past year. Worksteam messaging is no longer a curiosity (largely thanks to Slack). It’s the next big thing in UC/UCaaS (mostly UCaaS).

TalkingPointz readers will notice a clear expansion of coverage into IoT. Why? Because it’s the next big thing that will change how we work, communicate, and collaborate. It took me a while (a few years) to get this. I saw IoT as unrelated. When I was kid we didn’t have remote controls for TV. The remote was invented, and we no longer had to get up. But the television industry and the viewing public’s habits were largely unchanged.  I saw IoT as a new remote. Look, I can control the lights from my phone! Ho hum.

I was kinda right – the connectivity part of IoT isn’t that significant. The big change isn’t at the device level – it’s at the business level. The sensorification of the planet (the home, enterprise, farm, car, and more) has incredible implications. We describe business professionals as “knowledge workers” – well what happens when our knowledge of things increases exponentially? Suddenly, every problem has a big data solution. It also has the potential to transform nearly every product into a service. A service that knows, grows, and changes. It’s a very exciting time.

After I conquered the “UC” acronym, the next one was CEBP or communications enabled business processes. There’s a reason most people don’t know that one, and it’s because “click-to-dial” is easier to say. None of that stuff about SOTA and SOA materialized. The problem is telecomm IT professionals are not developers. So more recently the industry decided a new approach was in order. Instead of giving Telecom/IT tools, let’s give the users pre-integrated solutions. Bingo! Cisco has announced Spark will integrate with Watson, Apple iOS, and now Salesforce. This is written pre-MS Ignite, but Microsoft has been steadily integrating SfB across its own applications. Apple has now opened its dialer (sort of). Verizon has launched a true single number service between mobile and desktop phones. It find myself impressed weekly now. Watch Cisco, Fuze, BroadSoft, and Avaya over the next few weeks.