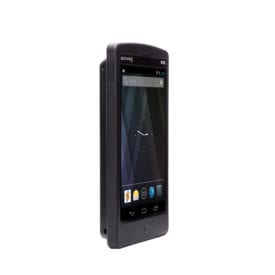 For example, despite our love affair with these devices, the typical consumer smartphone is too fragile, the batteries are a pain or impossible to change (for shifts), cameras make terrible scanners, and viruses and malware are a growing problem.

The new PIVOT line of Wi-Fi devices are smartphones for mobile (within the walls) enterprise users (these are not cellular devices). They are built-on Android (Jellybean), but at this time they are not Google Play store compatible. It seems Spectralink is still pondering the Play store, but it was the right call. They are designed to bridge the gap between friendly/familiar/versatile consumer smartphones and purpose-built, enterprise, mobile, voice capable, computing devices. They are designed to be used with the Spectralink Configuration Management System to load apps or an app store client (I saw one with the Amazon app store loaded).

I applaud Spectralink for taking-on this redesign, but have just a few suggestions for future enhancements.

BYOD does not eliminate the need for a device like this. These devices are meant to be shared devices critical to specific work processes. They are intended to be fit for purpose. BYOD is a question of who pays for and owns a consumer device.

Bottom line: This is a new promising platform that bridges wireless phones, apps, and scanners into a single handheld. I can foresee a strong future as the ecosystem of apps, accessories (thermometers, bp cuffs, etc.) and improved solutions expands and matures. It is really a new class of device – the prior generation of Wi-Fi phones were too limited from an application perspective. It might take a little time for the market to fully appreciate the potential of these devices.

Covid to End in 15 Months

Most customers encounter loyalty-eroding problems, and we must remember to exercise our voice when appropriate.