New From Apple: The iPager

The team in Cupertino did it again. This device is amazing – the new iPager from Apple.

Many people were expecting a watch, or iWatch. “Watches are ridiculously obsolete” says an Apple employee who works in the same building that Steve Jobs once did. “An iWatch had potential, but we really wanted something that started with the letters ‘iP’, we had started to design the iPocket Watch, but realized no one wears watches anymore. We adapted that iPocket Watch technology into the iPager. We feel confident that it’s exactly what people didn’t realize they needed.” 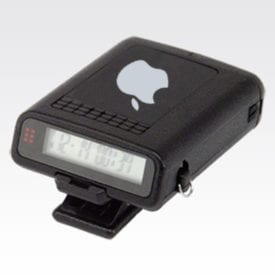 The iPager is much more valuable. It can be clipped over a belt or stored in a pocket or purse. The iPager increases productivity because when people want to talk to you, instead of calling and interrupting they simply send an alert with a return phone number wirelessly, near instantly. This enables users to control when and where they want to converse. It’s actually quite ingenious, and addresses a major design flaw in telephonic technology. The iPager complements a smartphone, but doesn’t actually require it because  it is also compatible with land-lines and other forms of communication. I intend to use mine with email, just “iPage” me and I will send you a note. The iPager receives signals over an dedicated, low cost network. The iPager is $499, and most wireless carriers will offer unlimited service for about $20/month (2 year contract required).

The display is also extremely innovative, it uses LCD technology which has long battery life – up to a whopping two months with normal usage. How can a single battery last so long? Because unlike modern smartphones that have wifi, GPS, blueTooth, and multiple cellular radios – this iPager does it all with just one receiver. It’s a breakthrough in communications technology. Apple listened to customers and added a consumer replaceable battery! A single AA battery (not included) is all that is needed, but the Apple iAA battery is recommended ($5.99). There are no proprietary charging cables, but there is a Lightening connector for those that that want to upload their messages to iCloud or download “PagerTones” from iTunes (starting at $0.99). The display supports all numeric characters, but it is not limited to phone numbers. You can send codes like “911” for urgent requests or “3388” for hugs and kisses. It can even be used for corporate information such as conveying a combination code to a lock.

It’s expected to be highly desirable to security oriented consumers. The iPager does not broadcast or track location. Message encryption is not supported at this time. The iPager has a 3.5 mm earbud jack for those that like to receive alerts privately (earbuds sold separately). The jack also will connect to hotels that have rooms equipped with compatible clock-radios.

The response from the developer community has been very positive. A new version of Angry Birds can send iPager equipped friends your latest level. There is particularly strong interest from  “on-call” industries such as healthcare and plumbing. Philips reports large applicability to healthcare, and expects many of its applications to embed iPager capabilities. Apple has released an iPager SDK.

If that wasn’t enough, the iPager also tells time! The device is packed with features, and it does it all with just one button.

Like other iDevices, the iPager adds new capabilities without replacing any other Apple device! It has some overlap with the iPhone, but it is a bit awkward to wear on the hip (the iPager’s belt clip is sold separately for only $39).

Tim Cook made reference to a new provocative advertising campaign that features celebrities wearing nothing but an iPager. Jennifer Lawrence is rumored, but she declined to make a public comment. Also unconfirmed, Apple may release a gold iPager when the sales of black ones slow.