I’ve always loved biking. Growing up in California meant I could ride my 5-Speed Schwinn (yellow Sting Ray with a banana seat) to school year round. In high school I rode a green Centurion 10-speed. In College I got my 18-speed Specialized Expedition – a state of-the-art road bike that I rode on several tours and a few century rides. Though I bought it 30 years ago it’s still in the family. I gave it to my son about five years ago as a family heirloom. He continues to ride it (with pride) at his college. I’ve never been without a bike, but I can’t say I ride much any more. Somewhere along the line I got fat, old, and moved to a vertical state. 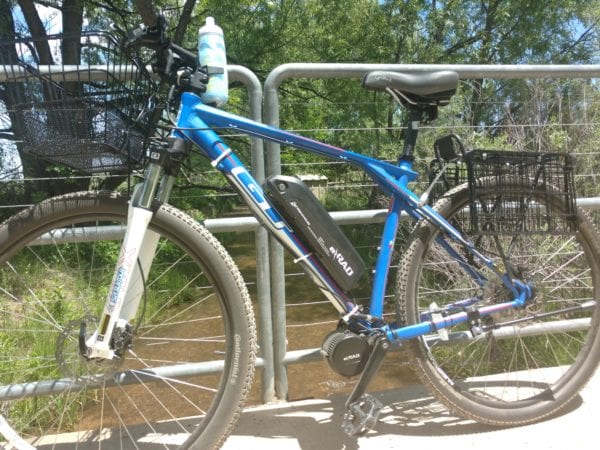 I decided it was time for a new bike (the last time I bought a bike was 22 years ago).

The meaning of the prefix “e” varies. Initially it was for electronic like e-mail. Then came environmental/green concerns which stole the prefix such as the e-town radio show. I’ve decided that the “e” in e-bike is both. Technically a traditional bike is more green than an e-bike, but the motor allows me to ride instead of drive more often. Also, I charge via home solar.

If you are not familiar with e-bikes they are a regular bike with an electric motor and battery. The typical first reaction is “oh, like a moped?” No! I’ve never understood mopeds – they make terrible bikes and crappy scooters. I don’t like mopeds, but do like bicycles and scooters (had a fun time on scooters in Bermuda with Art S and Sorell S after the Unify event). For a few pre-kid years I had a beautiful BMW K100 motorcycle. But the bicycle has always been my favorite two-wheeled vehicle. The electric motor on an e-bike is designed to assist rather than replace pedaling.

While mopeds are the worst of both world’s, e-bikes are the best. They can go anywhere, they don’t require a license or registration, and they are easy and free to park.  They take the pain out of the uphills, but don’t really alter the downhills and can speed-up boring flats. An e-bike’s motor assist is limited to 20 MPH by law, but some people override these settings.

There are several ways to obtain an e-bike. Most people will just go and buy one. After discussing it with a local bike shop, I decided to create one via conversion. I bought a slightly used mountain bike with the intent of converting it, and took it to Cruiser Boutique in Boulder. This approach gave me much more say – starting of course with the bike itself: townie, cruiser, mountain bike, road-bike, fat tire… so many options – and so much utter junk out there. I’m quite pleased with my GT Karakoram. It is my first bike with hydraulic disc brakes – this thing can stop on a dime. I also really like its huge, 29″ tires. A good test for a bike is how fast it can coast downhill, and this one flies.

Cruiser Boutique works with e-rad conversion kits. The kits include the motor/controller, the battery, the computer display, and the front gears (replaces the factory front gears and derailleur). All of these options offered additional customization opportunities. I learned through this experience that e-bikes are still on the bleeding edge (and becoming very popular). Being the month of May there was a shortage of parts. When the parts did arrive they were defective. The whole process took about a month which I’m told is highly irregular. I had a triple play of delay: back-ordered parts, defective parts, and a tech support failure that sent the wrong replacement parts. I suspect if I started over today it would take about a week, and by October they will be on clearance.

One bit of e-bike advice is to be sure you have a good dealer. We are used to thinking of bikes as generic – serviceable by any bike shop. E-bikes are not so generic, so think twice about buying online. My purchase experience was about as bad as you can get, but I can still recommend Cruiser Boutique. There are lots of e-bike brands too. My objective experience with E-Rad is they are going through some growing pains, but they did eventually get everything sorted. There are not as many vendors as there are brands due to patents and licensing.

Now with conversion behind me I’ve added my accessories. It’s a standard rack on the back, and attached to it are two collapsible metal baskets. The handlebars are where all the action is: In addition to the computer display (which shows speed, power assist setting, and charge level), there’s a water bottle (the battery takes up all the room in the frame), a bell, a separate throttle control, computer control buttons, and of course the brakes and gear shifter. I also put on a front basket.

I wanted a lot of cargo capacity because after 18 years at the same address, suddenly several retailers are within “biking distance” (including Costco). Also, my mailbox (UPS Store) is now only 8 minutes away by bike – it takes longer by car which follows a different route.

Take this Job and Hybrid It

The transition from work from home to hybrid is about more than where you work.