Continuing the series on Multi-Modal communications, I thought I would start with some examples in the consumer space. Three examples are below, and they are just scratching the surface of the possible. Multi-mobile adds dimension to voice communications – it is currently a new thing to explore, but soon it will be hard to imagine when phone calls were just voice.
First example, Thrutu: the makers of a mobile app that enables in-call sharing of media and information. Numerous types of information can be sent or exchanged including things like current location, photos, or contacts, without disrupting the conversation. Take a look at this video for a better introduction:

The limitation of Thrutu is it is a mobile to mobile application – both parties must have the application installed. It seems reasonable that the company would release a desktop client enabling desktops and mobiles to share information. Additionally, in order for the data transfer to not disrupt the phone call – it requires a cell service that can support voice and data at the same time (not supported on 3G with Verizon or Sprint).


But it shows the potential and power of multi-modal communications. The conversation doesn’t have to be just audio when there is a data channel. One solution Thrutu offers is the ability to send contact info – there’s been many attempts over the years to solve this problem, including IR (Palm), Bluetooth (Bump), and others. Thrutu takes advantage of the fact that most devices now have data connections. 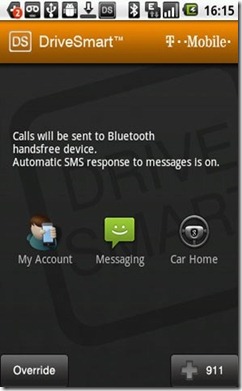 Drivesmart is a cell phone application preinstalled on many smartphones. It has a free version and a premium version. The app is designed to prevent fumbling with the phone while driving. It can either route calls to a Bluetooth headset or respond to calls (and text messages) with a text message stating the owner is currently driving. The free version requires the app to be activated before driving, and the paid version automatically detects “driving conditions”.
I assume it can’t tell the difference between driving a car and riding in a car, so the auto detection can be over-ridden – but doing so alerts Mom. T-Mobile is charging $4.50/mo for DriveSmart per account (not per phone).
Next up is BobSled, the only question is when is Bobsled up? The issue is the app came and went in about a week. Bobsled was an offering from T-Mobile to allow Facebook users to connect by voice. The technology (desktop to desktop VoIP)  isn’t radical as much as the vendor – T-mobile? The service is far more Skype-like than mobile-like, it didn’t even have an option for mobile use. .

Bobsled allowed click-to-call within Facebook – call any Facebook friend regardless if they have Bobsled or not – and it came complete with private or public (on the wall) voice messaging. The service was completely free to use. However, only a week or so after its launch, T-Mobile removed the service from Facebook saying it was confusingly similar to Facebook services.

We are voluntarily and temporarily suspending the Bobsled service as we work with our partners at Facebook to address their design questions, including working to ensure that the Bobsled experience is clearly differentiated and is not mistaken for a Facebook created property. We apologize to our customers for this temporary disruption in service.

If that’s true (and I doubt it is), then it implies T-Mobile went to great expense (T-Mobile purchased the underlying service infrastructure from Vivox) to launch free calling, but forget to brand it? I think not.
Supposedly Bobsled will re-launch soon with better branding. T-Mobile stated it intends to add additional features to Bobsled including video, support for mobile devices, and the ability to call off-net – initially it is FB to FB and desktop to desktop only. The revenue model behind Bobsled is a mystery – as was if people actually liked the service. Other than reporters writing about how it worked – I haven’t found a post indicating if it was actually likeable. Bobsled is not the first VoIP offering on Facebook – calling features are also available from Vonnage and a Skype offering has been rumored for some time.
Bobsled takes a predominately text based environment like Facebook and gives it the option of live voice conversations or the ability to leave recorded messages. This is a pretty significant announcement and feature-set (for free) to the world’s largest website and community. Watch for its return.
Next post in the series will look at some business examples of multi-modal communications.
See: Multi-Modal Communications 1