One thing I commonly hear among Asterisk loyalists is praise for the Polycom phones. I understand Polycom is the market share leader on Asterisk phone systems, and I think they make a decent product. But I have to say, the Mitel phones offer a superior architecture in almost every way. I really do like my Polycom IP550 – part of my complaint (and posted numerous times on this blog) is the SIP.CFG ritual process which is both primitive and stupid. The Asterisk community tends to rely on the phones for simple needs – pushing the advanced features to the switch and desktop interface. I think the phone should be much more than a line appearance; I want directory information, presence, BLF, soft controls for whatever (headset on/off, speaker on/off, speaker volume, speed dials, macro keys, etc. – all of which are possible, for a fee, on the Mitel).

Configuration management is almost always easier via proprietary protocols, so Polycom can’t solve the whole problem. A quick example: I have a “Queue Status” on my Mitel phone which flashes a light when the ACD hold time is greater than 2 minutes. I don’t think this could be duplicated on an Asterisk/Polycom solution, but if it can few know it. Conversely, on a Mitel, this can be configured from the PBX in seconds whereas the Polycom requires server file config changes and phone downloads and reboots.

That’s a bigger topic and one that will no doubt mature over time. However, the physical design of the Polycom phone is my beef in this post. Not that the phone is poorly designed – in fact, I have few complaints about their phones. I am just annoyed at the constant praise they receive for making such a great phone when I feel they make a good phone. I think Mitel makes a great phone – but they only work great on Mitel systems so are relatively unknown.

I am going to focus my comparison on the Mitel 5330 vs. the Polycom IP550, roughly equivalent phones in terms of broad features and price.

The Mitel 5330 phone provides 11 soft keys. These can be programmed as line keys or as feature keys. The Polycom comes with 4 line keys and 4 feature keys. I don’t understand why Polycom confines us with “different” key types. Additionally the Mitel keys are lit with multi color LEDs (the Polycom does with the line keys only). Both phones come with broadband or “HD” handsets – but the Mitel handset has ridges that grip your shoulder. Both phones have high quality speakerphones – but only the Polycom phone’s mute works on both the handset and headset (smart). Both phones have reasonable backlit graphical screens with an XML microbrowser.

One clever feature on the Mitel is the concept of a page key on the phone – so while there are 11 programmable soft keys, there are actually three pages of them. Both the Mitel and the Polycom phones come with cheap plastic bases to hold the phone up on a desktop – and both bases make cord access annoyingly difficult. But where the M 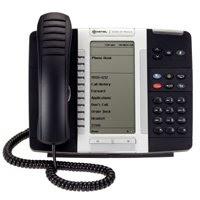 itel really stands out is the hardware design – daresay architecture of the phone. Specifically the base of the phone and the modules. The Mitel has multiple alternative bases – two in fact. One is a wifi base – I use this one with my primary Mitel phone. It allows the phone to be a wifi phone or a wifi access point. The base includes a small rubber antenna and when used with a Mitel AP – not only does the base provide phone connectivity over wifi, but a PC can be plugged into it too. The other base is a GB base allowing the phone to be connected to a GB network. This means a customer can upgrade their network to GB speeds without having to replace their 100MB phones.

But the card slot in the back of the phone is an even bigger differentiator. There are three cards available for the Mitel phones – all of which could make sense for a Polycom if their architecture allowed it. The first is a Line Interface Module. This is a really simple card that allows a POTS line to be plugged into the IP phone. Many people deploy these phones at home or in locations where there is another phone (analog) on the same desk. The LIM allows for a simple analog POTs line to appear as one line on the phone eliminating the 2nd phone. There is no integration with this line to the PBX, but the phone can be programmed to route 911 out the analog instead of the VoIP side. Clever.

The next card is for the speaker saucer. Mitel makes high-end speaker saucers similar to Polycom, albeit not as well known. The idea is that the full duplex speaker phone built into the phone is great for 1-2 people, but medium conference rooms require a bigger saucer. The Polycom solution is a totally separate phone/saucer for this. Mitel figures why add a phone, just add a saucer. The card allows the phone to control that saucer through the soft keys (saucer on, saucer mode, saucer volume). Not only does this provide a more familiar phone experience for the user since they are typically comfortable with their desk phone, but lowers the cost as the saucer doesn’t require 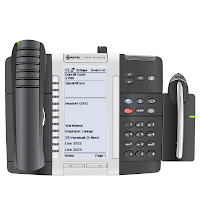 another license or extension.

But my favorite card on the Mitel phone is the DECT card. This allows for a DECT headset AND/OR handset to be added to the phone. This is a high quality, integrated wireless headset – look ma, no lifter. The DECT technology enables longer distances and better clarity than most wireless headsets and the integration is worth it alone. By the way, you can’t add a lifter to a Polycom phone because there is no cradle for the handset – most companies like Plantronics offer an after-market cradle so the lifter will work – a double kludge. Personally, I think handset lifters are the stupidest thing telecom ever invented. Though totally necessary since so few vendors offer integrated headsets, a mystery.

The Mitel phones support SIP, but I don’t recommend it. For SIP, I think Polycom is far more mainstream and non mainstream solutions aren’t usually worth it. Plus not all of these features like the cards work in the SIP mode. So when it comes to SIP, we tend to go with Polycom. And the Polycom phones are good phones. I just get a bit annoyed when I hear how great Polycom phones are – I think they could be so much more. The IP650 has a USB slot, which is innovative, but pretty limited. I would really like to see Polycom raise the bar in IP SIP Telephony. Their only real step forward in the past 5 years has been HD voice and improved microbrowsers – both features offer benefits to to a very small slice of their population.