Companies always refer to themselves as leaders especially in press releases. It’s generally a meaningless term unless of course its Gartner calling the company a Leader in the context of  a Magic Quadrant.

Mitel was recently recognized as such in the Gartner Magic Quadrant for UC 2014. Eleven companies were included in the report, and four were recognized as Leaders (Microsoft, Cisco, Avaya, and Mitel). I think this is a first time for Mitel, so congratulations are in order.

Gartner’s acknowledgement carries a bunch of weight, especially with people that don’t know anything about UC. It means Gartner is effectively endorsing Mitel – its management, products, channel, and support. Yes, it states clearly in the report which elements were evaluated and all of those and a lot more are included. If you are not familiar with the Magic Quadrant, it is standard template that Gartner uses across industries. The grid itself has two axes: ability to execute and completeness of vision. Companies that are high on both axes are Leaders. Companies that are low on both axes are niche, and that leaves Challengers and Visionaries. Challengers high on execution, but low on vision and Visionaries the opposite. Gartner generally advises its clients to focus on its Leaders when making a new technology decision. 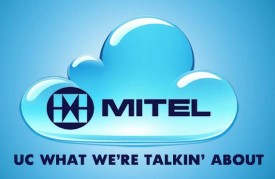 Mitel was the only company on the report that made positive movement on both axes (Up and Right). In this post, I will attempt to explain how they did it.

Gartner does not publish scoring details, so we don’t know exactly what was liked. There are some clues primarily in two locations: Strengths and Cautions and the Evaluation Criteria.

Looking at the strengths we see pretty clearly that Gartner liked the acquisition of Aastra. There are four Strengths and three of them point directly to Aastra (expanded market reach, more presence and visibility on a global scale, and successful indicators of a good integration). The remaining bullet compliments Mitel for having such a “mature” and “comprehensive”  solution

Things get a bit squirreley with the three Cautions. The first is that the danger of the Aastra acquisition ain’t over yet. The second says that Mitel must “advance” its previously described mature and comprehensive solution. The third says that not all Mitel dealers know the entire portfolio (this caution could apply to any vendor).

So the acquisition was well received and to date well executed. In one fell swoop, Mitel nearly doubled in size, became a market leader in several new markets, and managed to pay off some debt in the process. Good things are possible when you find an undervalued company with lots of cash. It seems obvious now, but swallowing a direct competitor is actually a risky move. Consider Avaya/Nortel or even Mitel/Inter-Tel.  (For a blast to the past – see my coverage after the initial announcement: Mi-Aastra)

Gartner does several MQs that include Mitel: UC, UCaaS, Contact Center, and Corporate Telephony. In all of these reports the primary Mitel solution that Gartner evaluates is MiVoice + MiCollab each time through different lenses. For example, the UC report evaluates telephony conferencing, messaging, IM/P, Clients, and CEBP. Presumably the UCaaS report will also evaluate these same components, but from a service perspective. It sounds redundant, but I think Mitel is the only covered vendor with the same primary product for both UC and UCaaS. In this UC report, Gartner identifies four areas as  “High” importance. We don’t know exactly what that actually means other than more important than areas of medium importance (there are no areas of low importance this year).  The four biggies are:

Product. As mentioned Gartner defined UC into six buckets. I would say Mitel is very strong in at least five of those six areas. Thanks to its PBX heritage, Mitel has very strong telephony features. Clients are also very strong – the advanced client offers an integrated softphone and the mobile client has location awareness. The least strong of the six areas is probably APIs, but Mitel did make major improvements last year with its OIG solution, and Mitel now offers integration with cloud services such as Salesforce and Google.

Overall Viability: This is an easy one for Gartner because Mitel is a public company and focused on UC. MITL stock has more than doubled in the past 12 months. Profits are up and debt is down. It is much more difficult for analysts to assess a private company’s financial health or the ongoing commitment at larger diversified companies.

Market Understanding: The funny thing about market understanding is that the proof is largely in the results which brings us back to sales and financials. However, Mitel did make some big changes over the past few years. At last year’s Business Partner Conference (BPC), Mitel kicked off its “Outside In” and Zero Moment of Truth (ZMOT) approaches to marketing (more Info here).  Mitel has been more engaged with its dealer panel and recently boasted that its user group grew 500 percent in the past year. Also at BPC-13, Mitel announced it was moving (from ACT) to Salesforce and Marketo.

Offering Strategy: I don’t have much insight into how Mitel prioritizes its development, but they do seem to prioritize well. The company bet early on virtualization and cloud. Last year had a lot of activity, in addition to ongoing updates to the MiVoice and MiCollab products Mitel also acquired Aastra, Oiasys, prairieFyre, and Telepo. The company released Contact Center 7, updated their Android-based conference units, released new mobile clients, launched a whole new line of endpoints, and expanded MiCloud internationally – I don’t think that’s even a complete list.

Mitel is having a pretty good 2014 – the question is can they sustain it?

They have a couple of aces of their sleeves. The first is MiCloud. Mitel has a better handle on the hosted business than most of its competitors. They have four public cloud strategies – a traditional agent/resale program, a resale program aimed at carriers (Mitel hosted – carrier branded), a wholesale offer for its dealers, and providers can also purchase all of these solutions for their own data centers. The service appears to be growing quickly. In the last quarter’s financial statements Mitel reported  558,372 non recurring cloud seats. I have no idea what a non recurring cloud seat is – and asking didn’t help.  Recurring hosted seats I get, and those numbers are growing – within them are Clearspan hosted services including an offer to higher education (Internet2).

Mitel also has potential with its Vidyo partnership. Video hardware is cooling, but Vidyo (like Mitel) primarily offers software based, virtual-ready solutions. Mitel supports Google Apps integration and Vidyo and Google are working together on WebRTC/VP9. Now that Google has freed Hangouts from Google Plus I expect increased demand for a gateway product/service from Hangouts to existing room systems. Mitel partners offer Vidyo-based video products and services.

The UC Magic Quadrant 2014 take away is that this industry is still undergoing significant change. There’s a concern in the fact that once again this premises-based report did not add any new vendors. I suspect next year, like this year, it will have fewer vendors as the market continues to consolidate.  That won’t be the case with the upcoming UCaaS Magic Quadrant which is growing so quickly Gartner added international capabilities to the inclusion requirements as an additional filter.