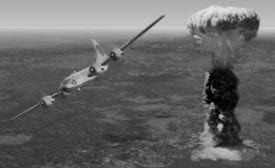 I see that the management of Sandia is changing hands from Lockheed Martin (who has managed it for two decades) to Honeywell. The $2.6 billion contract is regarded as “lucrative.” (See http://www.charlotteobserver.com/news/business/national-business/article121301918.html)

But did you know that throughout the Cold War Sandia was a division of AT&T? Yes, most of our country’s nuclear bombs were designed by and construction was overseen by our phone company. Only after the divestiture and breakup of the Bell System did AT&T give up this role of designing weapons of mass destruction.

Why did AT&T design all of our nuclear bombs?

Nuclear weapons were very controversial during the Cold War. The military wanted them, but Congress was loathe to fund the enormous of expense of nuclear weapons design. And, anything that Congress appropriated would be subject to public records disclosures.

So President Eisenhower asked if AT&T could design them and fund the project “as a service to our nation”. Quietly, it was agreed that all Sandia expenses would simply be branded as R&D and would be loaded into the telephone rate base. Every long distance call contributed towards making bombs. Congress didn’t need to make any embarrassing appropriation. There was no accountability. There was no review. It just happened.

Now the unwritten deal was this: AT&T would use its monopoly to charge monopoly prices and the excess proceeds would then be directed into government programs like Sandia. AT&T’s monopoly would be safe, and the company’s viability would be virtually assured. AT&T would in good times and bad earn a regulated return on its investment, making it the single safest stock pick in the world.

This all worked perfectly for decades. But then in the late 1970s somebody in the government forgot the secret deal. The government sued AT&T for antitrust. The evidence was their high rates and no apparent reason why companies like MCI shouldn’t be allowed to compete in the long distance market.

The problem was that AT&T couldn’t just stand up and say: “Hey, most of our monopolistic prices result in money going to fund the nation’s nuclear and biological weapons.” The public wouldn’t stand for it. The shareholders wouldn’t stand for it. And, by then, the folks that struck the deal were dead. So AT&T flailed its arms during the anti-trust proceedings…and lost. The result was the dismemberment of the world’s largest and most profitable corporation: The Bell System.

An unintended consequence was that now that AT&T didn’t get its part of the bargain, it decided it had no further obligation to fund the nation’s nuclear weapons. It simply handed Sandia Labs back to the government with a note that said: “Good Luck” (or something to that effect.)

People are constantly surprised that AT&T and Verizon have such a cozy relationship with the government. It goes back a long, long time.