Last week were two very interesting events. Lotusphere and ITExpo. I ended up taking the long way to Flordia, and all in all it was 7 flights over seven days. I don’t much care for flying. I don’t like the airlines. Regardless of these “loyalty” programs – I am as loyal to each of them as they are to me. Nuff said.

Lotusphere was a fantastic conference, I learned a lot and will have plenty to share along different themes. A bit like going back in time, all this client server stuff. At UCStrategies.com we covered this show and ITExpo in a podcast. I will post separately on ITExpo.

Remember last year at VoiceCon when Avaya had discovered SIP, well this year at Lotusphere, IBM discovered Social Networks. Probably due to the movie, which is why they invited Kevin Spacey as the “surprise guest” speaker. Kevin was pretty good, a pioneer in social (more than IBM) and Executive Producer for the movie. The photo is from my cell phone.

IBM’s social angle is centered around a product called Lotus Connections, it is something between Facebook and Twitter and Chatter, for the enterprise. It is browser based and can be implemented on a local server or through Lotus Live. The server version is designed for a single enterprise, but the Lotus Live version allows social conversations to other organizations. So if you want to be social with someone at a different company – say a customer or partner, then you need the hosted version. 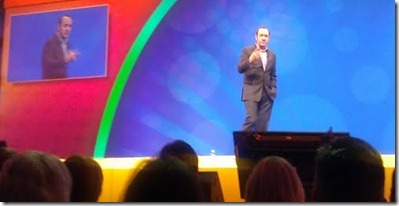 Social Enterprise is a young concept – at least in practice. The concept isn’t new at all. Some think it should be kept internal so you can post internal matters and not worry about it. Some think it should be external so you can actually collaborate with external organizations and users. Of course, you could actually use Facebook or Twitter for external communications. That’s why enterprise social stuff is so confusing – do we really need separate tools for Inter/Intra net communications? The answer seems to be yes. Just l like most of us have different email accounts for work and home.

The other two big products at Lotusphere were of course Notes/Domino and SameTime. The installed base is huge. IBM says its growing, but Microsoft insists it’s the IBM list of defectors to Exchange that is growing. Microsoft appears to be counting users and IBM counts licenses, that seems to allow them both to be right. There were several vendors on the exhibition floor that specialized in Exchange to Domino migrations, but quietly confessed that most of their business is the other way round.

The quiet star of the show was Lotus Live. IBM, Microsoft, Google, Cisco, Skype, Apple, and most recently HP seem to agree hosted services is where the puck is headed. Lotus Live didn’t get a lot of attention because the folks there were generally using client/server technologies, but it seemed pretty clear that Lotus Live is IBM’s future. And that isn’t a bad bet. Lotus Live, for example actually incorporates Connections and Notes into a single experience – bummer for ALT-TAB fans.

All this talk about client/server got me confused, so I had to make a cheat sheet. Here is what I put together.

The execs were readily available. Impressive based on the size of this show. SameTime is a nice product and IBM has a real opportunity to do something with it. Microsoft is clearly ahead with Lync, but IBM SameTime can play the best o breed card better with third party phone systems. Lync has that card too, but the fact that Microsoft wants to kill rather than partner third party phone system makers makes it a little less genuine. That is way companies like Avaya and ShoreTel were actually at Lotusphere saying look at us partner… I doubt you would see that at an Microsoft conference.

But what I don’t get about both Lync and SameTime is why they created separate clients instead of leveraging Notes and Outlook. Why do we need a separate client for synchronous (real time) communications and then switch to another app for asynchronous communications? Each with our contacts, and now each with presence? The standard response I get is not all SameTime users are Notes users – ok, so what? I don’t speak Portuguese so I didn’t install that dictionary in Word. We are talking client apps – the less clients (to install, support, purchase, update) the better. Not to mention the fact that IBM could go to all of its Lotus users and say guess what, you already have the SameTime client, just go install that server and voila. Then I hear that the apps are so different that it would not make sense, of course the online apps overcome this just fine.

Back to the key theme being social though, I could not help but notice the SuperBowl halftime show being sponsored by Chatter (before and after ads, plus a tie in with the entertainment act). The news the next day was about Yammer and SocialCast and then ClearVale. I think about my personal use of Twitter as a business tool, and the fact that Facebook gets more traffic than Google – and it’s pretty clear we got ourselves a wave here. It seems so obvious to be celebrating social at an IT conference like this, but then I can’t seem to recall Microsoft’s, Sun/Oracle’s, HP’s, or Google’s social strategy for business.

IBM suggested social is the fifth wave (mainframe, mini, pc, Internet, ____). Google presented last Spring, with a bit more authoritatively via Morgan Stanley, that Mobile Internet is the fifth big wave. Social Mobile Internet must be a tidal wave then. None the less, it is becoming clear that social networks are starting to hit the enterprise and it deserves more attention on this blog.

Speaking of the SuperBowl, the folks in Fort Worth were using IBM SameTime in a clever way – to manage radios – at the game. It came up in several presentations, but I can’t really find much detail on it. But in case you find yourself hosting a major football event, you might want to look into it.

I think IBM and SameTime will have some interesting new tricks this year. Celeb told me they are going to “shore” things up. I asked if there was meaning to the word choice and he laughed it off, but ShoreTel is betting heavily on SameTime.