Long Distance Choice is Back (Mobile)

U.S. cell phone users rarely complain about the cost of long distance because its hidden. Rather than charge extra for long distance, they simply charge equally for all domestic calls (and cleverly market it as free long distance). But the rules change dramatically when the calls are international. Calling internationally from a mobile phone is not a trivial expense. It is even worse on calls placed while abroad because roaming charges are tacked-on too. Partially to blame is mobile carriers don’t allow choice in long distance providers. Users of SIM based phones can obtain a local SIM card while traveling, but this requires pre-purchasing a minimum amount of minutes – and unused minutes offset the savings. Plus changing SIM cards means changing phone numbers.

The trick to cheap international calling is effectively the same trick millions have already discovered at home; use the Internet. It it is just a bit trickier on a cell phone. There are basically three general ways to do this; 1) use wifi and bypass “voice” or “minutes” services, 2) call via an intermediary service, or 3) use 3G. Of the three, WiFi is generally preferred as calls are very inexpensive and usually decent quality. Intermediary dialing services are growing in popularity and are increasingly transparent, but do consume (domestic) minutes. 3G is the newest of the options and a bit quirky since quality is unpredictable, plus this option is only available on some phones and some carriers.

The perceived champ of free long/cheap long distance is Skype due to its success and ubiquity in the desktop space. Skype does offer a robust client on the iPhone that offers long distance (WiFi and domestic calling gateways) and Skype IM. A limited version called SkypeLite is available for Android without WiFi calling. Truphone offers a broader portfolio, the UK company was the first to support VoIP on the iPhone, and also offers clients for Blackberry, Nokia, and Android. The latest release for Android includes WiFi calling and Instant messaging with Skype, GoogleTalk, AIM, Yahoo! and MSN. With either Skype or Truphone, international gateway calls are transparent. The result is similar to multi-step calling cards, but its without the multi-steps. The application overtakes the dialer so it appears to the user the same as a native/direct call.

Three other options worth noting are Google Voice, Fring, and SipDroid. Google Voice is only viable for international calls that originate in the U.S. It offers competitive rates (competitive to Skype and Truphone) via prepaid credits. Google Voice is really a different type of service which includes international dialing. It is more appropriate if its other services are of interest. Fring is similar to Skype but a little more social – it integrates with Skype, MSN Messenger, Google Talk, ICQ, SIP, Twitter, Yahoo!, and AIM – it even offers alerts from FaceBook and Gmail. It does this all from its own buddy list type interface which is fine if you happen to be contacting a buddy. SIPDroid is a SIP client, but it must be manually configured to work with a separate SIP service. Both Fring and SIPDroid use WiFi and 3G calling (3G recommended only for tolerant buddies).

It is nice to see some new options entering the traditionally closed world of mobile telephony. Ironically, it is because that carriers don’t provide a choice that so many options are em 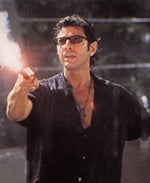 The dinosaur population of Jurassic Park was designed to be controlled by having all the dinosaurs be female. Thus, no breeding possible. And no breeding is good breeding, because otherwise all hell would break loose. However, during the film, Dr. Alan Grant discovers the nest of a Velociraptor filled with hatched eggs. As said by Malcolm, life finds a way. Don’t try to control it.