Microsoft continues to improve the Skype for Business video experience. Recent updates include the launch of the Surface Hub, broadcast and translation services, international POPs for conferencing, the upcoming ability for multinational organizations to keep meetings regionalized, and now a new lower cost room system.

We got a glimpse of “Project Rigel” during Zig’s keynote at Enterprise Connect last March. The solution now known as the next generation of Skype Room Systems (SRS). The solution is an evolution of the Lync Room System (LRS) announced in 2013. The LRS system utilized touch-screen display(s) that served as both a display panel and white board. A Lync client ran on an embedded Windows device that also used a separate smaller touch-screen for control.  The primary OEMs were Smart Technologies and Crestron.

The next generation of SRS is very similar, but utilizes lower-cost non-touch displays controlled by a computer running a special version of Windows 10. The large electronic white-board is effectively traded for a lower cost solution. The smaller touch-screen control survives.

Logitech will be the first to market with an SRS solution with its SmartDock for Skype for Business. 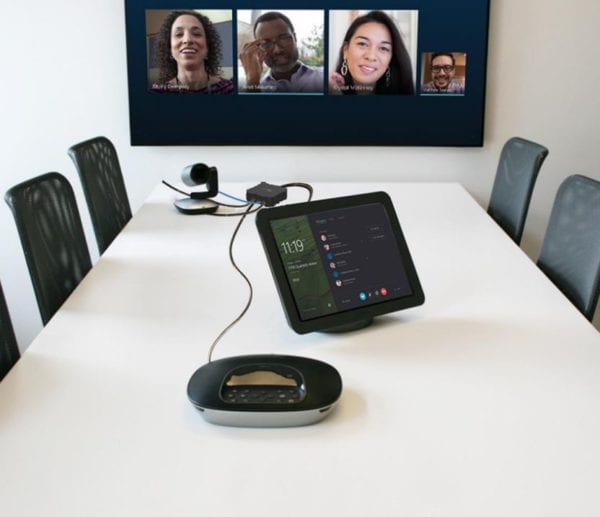 The Logitech SmartDock is intended to sit on the tabletop and provides the following functions:

Logitech offers an expander box to assist with cable management. This allows a single 5 meter cable between the dock and the box which then breaks out the separate ports for the other devices.

It’s positioned as a native SfB video room experience that should be intuitive for users to operate. The touch-display will show scheduled meetings and provide one-touch meeting starts. It’s an alternative primarily against:

Microsoft believes the solution will start around $2k – that’s a bit low.  Figure a $5k starting price for a complete solution that includes the control equipment, HD display, A/V peripherals, and installation. SRS provides a reasonably intuitive interface that most will find easy – even obvious – to use.

What’s not covered in the sales pitch:

Competitive UC systems use a similar approach. The key difference is the Logitech ConferenceCam solutions are often used with a BYO PC instead of fixed appliance environment. Several vendors use Intel NUC-based designs for an appliance-like controller, but these don’t have an integrated touch-screen. Cisco’s approach with Spark uses in- room hardware and the user’s smartphone as the controller.

Additional SRS options are coming from Crestron and Polycom. The Logitech SmartDock will be the first solution generally available. The Crestron will be integrated into its other product lines, and Polycom will leverage existing hardware early next year.

The solution was thought to be an application on a Windows-10 SP4. The actual solution involves a custom version of Windows 10.