Knock Knock it is DoorBot

One of the stars of the recent CEDIA conference was DoorBot. 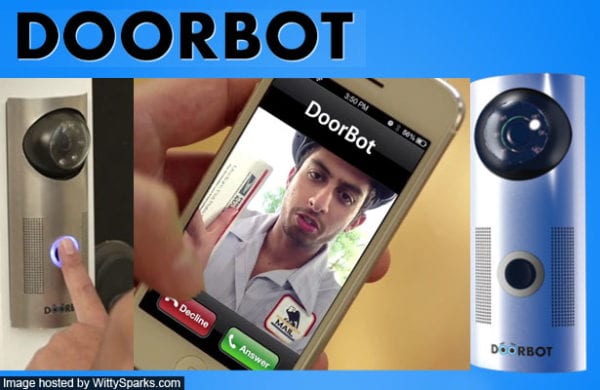 Let that sink in – CEDIA stands for Custom Electronic Design and Installation Association. It is a trade group of specialists in home theater installation, home automation, energy efficiency systems, and other home technologies. The exhibit hall was filled with state of the art technologies well above the reach of the average homeowner – yet the star of the show was a $200 doorbell.

The power of mobile.

DoorBot is an interesting concept and an even more interesting story. I ran into the team about a year ago at Twiliocon when they were showing off a calendar synchronization tool called Lasso. A potential, albeit consumer oriented, replacement for my long lost Tungle. Lasso seems to have pivoted a bit more into a conference calling utility, but that’s a different story. DoorBot is made by BOT Home Automation.

DoorBot, like Lasso, is aimed at the consumer market. It’s a surface mount doorbell that cleverly allows instant video communications to a smartphone over Wi-Fi. The smartphone and DoorBot do not need to be on the same network.

DoorBot initiates a push notification to the smartphone via their cloud servers. A two-way visual and audio connection is established. Oh, it can also ring the doorbell. The man behind the company is Jamie Siminoff, and he’s managed to make the doorbell sexy. Siminoff used crowdfunding to fund the product, but not his company which is also clever.

There’s a bigger story than just another gadget. It’s really about how the cloud can become physical. The work on DoorBot started in December of 2012 and it will be on the shelves at Staples less than a year later just in time for the holidays. The team uses largely off-the-shelf components and built the software server on Amazon’s AWS infrastructure. Amazon provided a low risk scalable solution that keeps costs low enough that there’s no need for a recurring charge in the model. Besides, would you pay an annual recurring fee for a doorbell?

The DoorBot is self-contained with a Wi-Fi radio, video camera, microphone, speaker, color display, and rechargeable 12 month battery all housed within an ABS plastic box sporting a brushed aluminum faceplate. The hard wire from porch to bell is optional as the DoorBot primarily uses Wi-Fi. If a  hard wire is there, it can be used to ring a physical chime and power the bot. Without a wire, the battery will supposedly last a year and can be then be recharged via a USB cable.

The big problem with Wi-Fi is it is power thirsty. This isn’t a big deal for DoorBot because it’s almost always off. The doorbell button turns on the device, and the subsequent video chats are expected to be short. There is no way to turn it on remotely, so if someone knocks it’s going to require a trip to the door to see who it is.

The DoorBot works with both Android and iOS, and can work with with multiple household devices (for every house member). It’s reasonably well thought-out and sells for $199.

It is a very interesting concept, and I expect many imitations to soon follow. Congrats to BOT Home Automation for such a clever and simple idea.