ITExpo East took place at the beginning of Feb in Miami.Probably the best IT Expo I’ve ever experienced (3 now). I mostly hung out at the Cloud Communications Summit with Thomas Howe. He is a legend and I was pleased to be able to cohost the event with him. We had some great discussions at the Cloud Summit.

ITExpo’s are always a bit unusual in my opinion. All of the ones I’ve been at are at convention centers instead of hotels. The facilities are fine, but it contributes to the scattered-ness of the program when everyone leaves. ITExpos have plenty of concurrent programming which is good, but without a unified schedule.

Cloud Summit: We had a total of 8 sessions, all panels except for the first one where Thomas gave an overview of the environment. Larry Lisser also moderated one on SMB communications.  I have no doubt that these were among the best panels at the event. We had some spectacular conversations, and what’s really nice about the Cloud Summit is the audience participation – it isn’t just a row of talking heads – its live, intelligent, interaction. 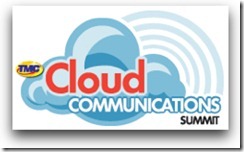 Participants in the various sessions included: Dan York/Voxeo, Wesley Chan/Google Ventures, Wes Durrow/Fonality, Brooks Robinson/Cbeyond (coFounder), Wendy Moore-Bayley/Mitel, Tim Titus/Pathsolutions, Robert Collazo/Rackspace, Matt Jordan/Skype, Steve Sokol/Digium, Moshe Yudkowsky/Disaggregate – and oh so many more.
Also compelling was the audience. That’s what makes the interaction work. A distinguished engineer from Cisco, a Skype lurker, the various carriers, and other tech-household names and luminaries. At most conferences I attend, I am the technical one. Not here.

Of the sessions I moderated my favorite was the channel conversation. I started it off with pointing out Skye’s new channel program didn’t offer residuals or resale rights and we took it from there. It was a great conversation and basically concluded with the channel is changing which may seem obvious, but exactly how and where the profit lies isn’t so clear. Thinking Phone Networks was intriguing as they are doing hosted UC to the enterprise via the channel where so many others are going direct to SMB. Cbeyond too has an interesting channel play that continues to get broader and impressively stickier.

StartupCamp3: My bud Larry Lisser is nailing this ritual. This is the best attended event at ITExpo, over 500 people this time came to hear the startups make their pitches. A bit more animated this year with Google’s presence – Craig Walker of Google Voice doing the keynote and Wesley Chan of Google Ventures playing the role of Simon the American Idol judge. The companies presenting were great, and at least two of them got funding on the spot.

My favorite this time around was HookFlash. A catchy but odd name for the business that intends to make smartphones realistically easy to manage as SIP extensions. Quite clever really, a SIP softphone client that comes with an enterprise management solution. Trent Johnson did the pitch, but when the questions got beyond yes/no responses Eric Lagerway – formerly of CounterPath jumped in. I think this company has some real potential.
SmartGrid: Jon Arnold ran another SmartGrid summit where they covered a battery of shocking topics with electrifying presentations. I made the mistake of checking in on one of the sessions and got volunteered to share my experience with my not so smart smart-home including solar and house-wide power monitoring.
UCStrategies: This was the first year UCStrategies had a track, I participated on one panel as I was mostly booked in the Cloud Summit. From the UC Strategies team we had Blair Pleasant, David Yebwab, and Michael Finneran. Jon Arnold was, of course, busy with SmartGrid.
Other Highlights: The keynotes were a bit hit or miss this year. I liked Danny Windham’s keynote the best. He explained why and how to open source a business. I wanted to ask him how much of Digium’s business is running open source. I didn’t get the chance, I suspect more than most. There was a party at a Miami nightclub one night conveniently located 15 blocks from the convention center. The show floor had the usual suspects and a few more. Packet8 was not there this time around and Aastra was – score one for premise based.
Phones? At least twice at ITExpo and more recently a few other times I find myself in a conversation questioning the need for desktop phones. The answer is generally their death has been greatly exaggerated, but I find it interesting that the question is coming up more often in totally different contexts. The primary alternatives are softphones and smartphones both of which offer a perception of greater price performance than desktop phones.

Of course this isn’t a new question – and there have been several discussions many places including this blog on that topic. I find that when conversations keep coming up, that the answer furnished is probably wrong. The PBX phone is a relic and needs to get its act together. That’s the problem. The solution is not so simple – the Android deskphone or cell phone-like deskphone isn’t the solution. It will just be an inferior cell phone.  The USB phone-like device associated with MS Lync is an interesting alternative, but to my knowledge still contained to Lync.I like the big video phone – VVX1500 like devices, but video interop is such a nightmare they don’t make general sense either. The phone needs to find its special purpose; a way to become relevant again – I know that it will.

Next event is Enterprise Connect – I am excited about the Innovation Showcase, we have selected four exciting companies that will be announced on Monday 2/28. Later in March is the UCSummit.