Have I been unkind to the Home Automation people?

You may think I am being unkind.

So let me visually illustrate a product by these brainiacs…

AeoTec makes a nice, solid, attractive power strip. It speaks Z-Wave (the most popular of the incompatible protocols.) Four of the outlets can be individually switched on and off (but only if you have a hub that supports Z-Wave and only if it had a driver for this particular power strip and only if you are within 30 feet of another device on the Z-Wave network.

On the surface this looks like a really nice piece of plastics. It’s beautiful and heavy. 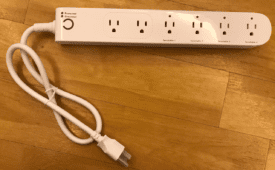 Why this device even has notches on the back so that you can mount it to the wall in a semi-permanent way: 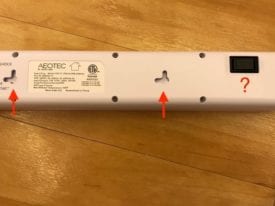 I wonder how many hours of people’s time will be spent wondering why their power strip won’t turn on. (Does it need to be re-synchronized? Do I need to re-enroll it into the network? Is it outside the 30-foot range of the device?) When the problem is simply that there is a tripped circuit breaker on the back that you cannot see because it has been mounted to the wall using the mounting clips the manufacturer provided.

It is this level of incredibly poor thinking that is dooming Home Automation to the same fate that the telecommunications industry has suffered…the customer’s needs are not front and center. The customer is not the most important person in these companies.