Remember when it was only DJs that wore headphones? (what’s a DJ?) Of course I totally get it – I wear headphones everyday myself. I wear a headset at my desk (Plantronics and Jabra – 2 phones), the BackBeat Go 2 on my dog walks, and now I have a new set of muffs worthy of a separate post – just in time for the holidays.

If you are a legacy voice guy, you no doubt associate Plantronics with call center “skin”-colored boom headsets. The most glamorous these devices ever became was a co-starring role in the original Diehard movie.

Theo: “All right, listen up guys. ‘Twas the night before Christmas, and all through the house, not a creature was stirring, except… the four assholes coming in the rear in standard two-by-two cover formation.”

But headsets have become a mass market item now and Plantronics has been busy expanding its portfolio – beyond call centers. First came the mobile headset boom, and now music-first (blasphemy) models.

Two big innovations changed the music headphones business – noise cancellation and bluetooth. These features, plus the fact that everyone has at least one if not several source devices, have created a unique market opportunity – at least for the vendors with “the right stuff.” The BackBeat Pro has BT, noise cancellation and a surprising bit more that create an exceptional package.

The first question in headphones is in-ear or on-ear. That’s a trade-off between portability and quality, so depends on how they will be used. I wear the BackBeat Go 2 on my dog walks. These are small, light, bluetooth earbuds.

At home, I want something more substantial. You see, I got a massage chair, and it’s a great place to zone-out, except for the distracting motor noise. Pick’n up good vibrations is the perfect accouterment to good vibrations.

If you decide on on-ear, there’s still a lot of choices. The audiophiles will no doubt get the super deluxe stuff, that typically run over $1000. I like quality, but cash even more. Most of my content is MP3 anyway – so that’s just a bit OTT.

The hipsters are all going with Beats – I wasn’t cool enough for those even before Apple bought them.

That brings me to the Plantronics BackBeat Pro.

These are music-first headphones, and I think the first on-ear model from Plantronics. Music-first means just that, but they still work as a phone headset. It’s just silly to be sitting there listening to tunes on a smartphone without being able to answer a call.

Speaking of being connected to a phone, the BackBeat Pro has two connectivity options – it includes a 3.5 mm headset cable AND bluetooth. This is more than convenience, it means the headphones can be used even if the battery is dead. There can be some stress associated with ensuring everything is charged when it is needed, so don’t underestimate the corded feature. Plantronics claims the built-in rechargeable battery will provide 24 hours of music.

Also relating to phone tech, Plantronics included their in-unit sensor capabilities found in its UC and mobile headsets. When you take-off the BackBeat Pro, it automatically pauses playback. Genius.

Bluetooth gets an unfair wrap with quality concerns, but I think that stems from older technology. The BackBeat Pro uses bluetooth 4.0 which sounds great and adds an extra 300’ of range over earlier versions. Also, compliant smartphones can display the charge level of the headphone’s battery. Bluetooth doesn’t mean you have to use it with a phone, but since everyone has one the chances are good.

Standard playback controls are located on the exterior of the ear cups. I think the controls are more intuitive than the BackBeat Go 2, probably because there is more room than on an inline cord control. 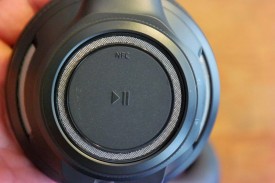 Regarding noise cancellation, these are the best non-Bose headphones I’ve come across. Most active noise cancellation is crap, but the BackBeat Pro exceeded expectations and does reasonably well. There are multiple hidden microphones to detect and mask background noise – plus the natural insulation and seal offer excellent passive noise control.

A very clever use of those microphones is an added-noise feature. This is a something that I’ve always wanted in a headset. Music isolation is great, but can be problematic. Sometimes it is good to be able to hear the environment around you. Plantronics calls this OpenMic. I call it the waiting room feature – if I have to wait, I may as well listen to something. Though I still need an ear open to hear when my name is called. OpenMic is also good for undercover eavesdropping. The mixing levels between background and source are adjustable.

The BackBeat Pro has all this, and I guess I should mention it sounds great too. I probably should have mentioned that earlier. I considered that table-stakes for a post, so instead jumped right to the other stuff.

The BackBeat Pro runs about $250 and appears to be available everywhere.