Facebook Workplace is Facebook’s new enterprise service. The company is going to attempt to expand from its consumer social-app that is associated with wasted time and cat videos to an enterprise communications and collaboration tool associated with productivity.

Good luck to them – they are going to need it. 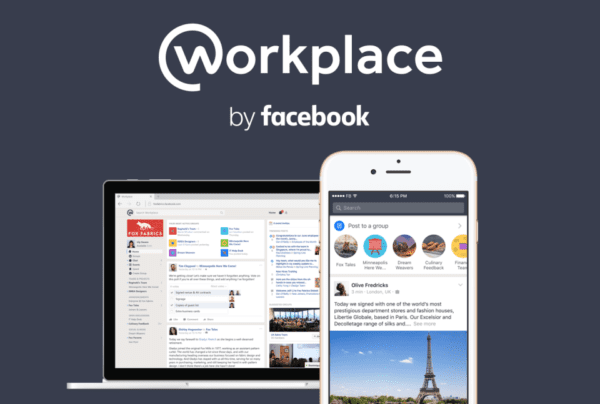 On first glance it seems like an obvious fit. For a decade now companies have been trying to figure out how to create social economies in the workplace. Sometimes we describe this general group of social-work apps as ‘Facebook for the Office.’ But none have truly delivered on that description.

I prefer the name Facebook for Work – which it used during its beta. That made sense. Workplace is an odd name. The enterprise has been moving away from work as a place for a decade now.

There is an important difference between inclusive and exclusive communications. I’ve written about this before – but it’s important so here it is again. When Ricky sends Lucy an email, it is exclusive because Ethel is not included. The social rules of exclusive communications mean that should Lucy forward this note to Ethel, she may offend or break a social contract with Ricky. We’ve all experienced this – “hey that was just for you!”

On the other hand, if Ricky posts a message on the bulletin board it’s inclusive because everyone is welcome to read and respond to it. If Lucy tells Ethel to read it, Ricky is happy. There’s some natural economies here because content finds people, not necessarily just the other way around. Social systems are more like bulletin boards.

Inclusive and exclusive is complex. Sometimes people try to be inclusive with email, but that usually backfires. This is when there’s simply too many addressees and too many reply-alls on an email chain. We want to be inclusive, but email is the wrong tool – it becomes annoying spam.

The key difference here is that the receiver has no control over what they receive in email. Each message requires a decision/action by the receiver to prioritize, follow-up, file, delete, or reply. Reply is particularly awkward because it now forces the receiver to reply-all and create spam or risk offense by dropping some addressees (turning inclusive into exclusive). Regardless, each email message requires processing. Social alternatives do not – we just glance at the “feed.”

Enterprise social tools promote inclusive communications that puts control back with the receiver. Now it is up the individual to subscribe and participate. This has problems too, but nothing like email. I refer to these types of messaging applications for work as Workstream Messaging solutions because they insert themselves into the stream of work.

There’s lot of benefits to Workstream Messaging. Now, let’s get back to Facebook.

There are several reasons why Facebook has a difficult task ahead of it with its new Workplace application. Here are four challenges it faces:

It’s hard for a brand to be associated with both consumer and enterprise. It does happen. Microsoft has done an excellent job in general and particularly with Office which plays well in education, consumer, SMB, and enterprise. However, it’s a very hard trick to do.

Would you buy dress shoes by Nike? How about fish and chips from KFC? In both cases the companies are well suited to deliver such products. KFC tried to sell fish, but the public rejected it. Evidently we prefer to buy our fried fish from a different restaurant with identical equipment.

Usually when companies want to mix their demographics they need separate brands.  Facebook Workplace and Facebook are the same brand. If you want a cheaper car consider Chevy not a Cadillac even though they are both GM. It’s why coke keeps Odwalla a separate brand, and why Colgate keeps the Tom’s of Maine a separate brand.

Brands are much more than product names. We have implied contracts with brands. In the case of KFC it is a chicken contract. We pay more for certain brands because we have higher expectations. The Facebook brand is not an enterprise brand. It’s about likes, and grand children, and ads. None of those exist in Workplace.

These next two items are inter-related.

Facebook is very capable of in-app voice and video communications – they do it all the time. But they don’t (currently) offer solutions for PSTN, telephones, and group video conferencing. Technically this is true for companies like Slack too – which is why I have concerns about their future.

Sure they can introduce new products, but that leads me to my next point.

Facebook is a direct company. Indirect channels are no longer required – many companies such as a Slack and Twilio have been very successful with direct sales. But this point is tied closely with the above point: complete real-time solutions are still necessary– they are needed for things like 911, contact centers, and conferencing solutions.

Since they already have 1000 customers using a product that wasn’t publicly available, it’s safe to assume they have some sales staff. The question is: are they going to build a global salesforce or build an indirect channel network? Will Facebook or its partners be UC savvy?

Companies like Slack and Facebook are assuming you want a fragmented communications solution: One solution, their app, that does some real-time and async communications, and a separate UC solution that provides the remaining (dull) real-time parts. That kind of defeats the purpose of a single app capable of async and real-time comms.

This final point has to do with why? Why is Facebook doing this? The obvious answer is because they can. They have the product fit to do it easily. But that’s a problematic answer. Facebook is one of the most valuable companies on the planet because of its advertising service. It offers advertising-based services unlike any of its competitors. Facebook knows so much about its users that it can offer highly targeted demographic information and advertising. If you want to advertise to conservative executives in Atlanta that like Baseball-  you can do that with Facebook. Facebook can do this because of its built-in amazing analytics.

Facebook not only knows about you, but the potential spending power of your circle and your political leanings even if you haven’t made political posts. The entire platform has been optimized for information collection and advertising – and it’s impressive. Twitter and Google are the closest alternatives, but not even close.

Facebook has said that Workplace is ad free. So what’s in it for them? At $1-$3/user/month not much. Perhaps Workplace will be a mega hit, but my guess is it will be like GSuite – a self-funding hobby at best.

Keep in mind that Workstream Messaging has lots of competitors. There’s no real competition to Facebook. Several have tried and failed (Google+). Why would Facebook want to spend time, money, and brand power to create a low margin, competitive, incomplete solution when it can instead focus on its core, lucrative advertising business?

Workplace even has the potential to hurt its consumer business. Consider this: If you spend all day on Workplace at the office – do you really want to come home to Facebook for fun?

Without doubt Facebook Workplace is going to cause a stir. It’s cheap! It likely won’t require any training, and the company is highly competent. Facebook’s move is good in the sense that it will drive awareness of Workstream Messaging. It’s also a dangerous development as it will create fierce price erosion. This isn’t Facebook’s core business and they have nothing to lose with extremely low pricing.  I think it’s going to be a tough road for Slack, HipChat, Jive, Redbooth, and others that don’t have the brand of Facebook or the UC component.

It will be interesting to watch.

Workstream Messaging is likely the most significant transition presently occurring within enterprise communications. Pick your partners carefully and make sure their objectives are reasonably aligned with your own.