Delivering Microsoft’s keynote was Zig Serafin. Good to see Zig getting more public exposure. He is currently the Corporate Vice President over Skype for Business. He has been at Microsoft for over 16 years and has worked with Gurdeep Singh Pall in many Microsoft divisions including Bing, Cortana, and AI. Gurdeep is responsible for both Skype and Skype4B.

I imagine this keynote was difficult to craft because of timing. Microsoft will be launching Skype for Business (Skype4B) later this year in association with a makeover that includes Windows 10, Office 2015, and associated changes to Office 365. More announcements and details are expected in May. 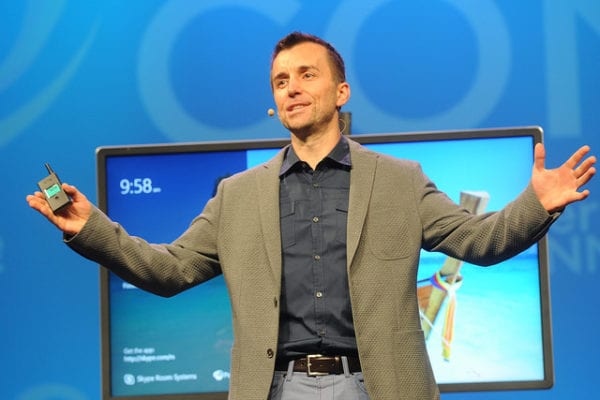 Like the prior keynote presentations, Zig also started with change and transformation. He took us back to the 1960 debate between Nixon and Kennedy to illustrate how transitions (radio to television) create opportunities. Many believe that Kennedy won the debate (and election) because he better leveraged the new medium.

It’s an old example, but remains relevant. Today the benefits of video are obvious in debates and other regards, yet an extraordinary amount of business communications remains trapped in audio and text. Competitive advantages are being realized by those that get it and embrace new mediums, so Zig encouraged attendees to get on the “Kennedy side of the debate [with Skype4B].”

Zig then shared a video that was used to align the internal Skype4B unit.  It showed people working in a variety of locations, using a variety of devices, across multiple modalities. It highlighted several emerging technologies such as natural speech recognition and instantaneous translation. Zig said he still gets “goosebumps” when he sees the video. I think that statement reveals more passion than typically found among UC executives. There’s excitement at Microsoft. Goosebumps are part of it, but more importantly the willingness to admit it.

Then came two sets of numbers for Lync and Skype. There’s some contention and ambiguity in both sets, but regardless it is clear that Microsoft’s Lync and Skype (together and separately) have tremendously impacted how the world communicates.

Skype4B has arrived. Not quite in general release, but the pre-release client is available for download. The name change from Lync to Skype4B has caused some confusion. Zig quickly clarified the confusion (no, Lync technology is not going away): Skype4B includes the full Lync feature set (past version) plus significant enhancements (next version) plus interconnectivity with the global Skype network. (see my related post: Goodbye Lync).

In addition to leveraging the familiarity of Skype’s name, Skype4B also leverages its familiar in-call experience and will adopt Skype’s cloud-first heritage. To explain it more, Zig invited his first guest via Skype4B: Ilya Bukshtyen, a Group Leader from Skype Engineering.

Ilya took us through the (Lync-Skype blend) interface. The in-call experience looks nearly identical to Skype, but with additional options such as moving an active call to a different device. The new Skype4B contact list remain familiar to Lync, but uses Skype’s checkmark icons to indicate presence.

As Metcalf promised, the value of Skype4B is increased with Skype’s huge base of users. Microsoft has developed interoperability, but finding contacts in Skype’s huge directory mitigates the experience. Zig demonstrated improvements with a natural language search in the client (technology attributed to Bing).

The demonstration cleverly searched for “Rowan Trollope” (of Cisco) using modifiers such as “in San Jose” to find him. Zig simultaneously demonstrated natural language search and the extensive reach of Skype’s directory.

The demo was well executed, but left me with a few concerns. First there’s only three Rowan Trollope’s in the Skype directory. Certainly there are common names with hundreds of entries, so that’s a minor nit. However, natural language is not as effective as faceted search. Amazon and eBay provide familiar faceted search examples which narrow results with categorized options. Zig searched for “Trollope in California” and “Trollope in San Jose” – these were separate searches. It wasn’t clear if one could narrow a broader search, for example, narrowing “Smith in New York” to just residents in that city.

There’s also the minor observation that Rowan Trollope was currently “in Orlando.” Many UC solutions now feature location awareness, and there are  use cases where this information is useful.

However the point that even competitors use Skype is valid. Fortunately for Rowan he wasn’t “available” on Skype, so there’s no evidence that he currently uses it (perhaps it was from his days at Symantec). Though it is no secret that many UC industry executives do use Skype. Lync leveraging Skype’s directory and user base is a tremendous differentiator.

One problem with Skype is it is strictly OTT. As we all know, OTT isn’t generally appropriate for enterprise comms. This brings me (and Zig) to the next announcement of Azure ExpressRoute. Organizations will be able to privately connect via a WAN link to both Office365 and Azure (Office365 includes hosted Skype4B). The announcement featured 10 global providers, including Verizon and AT&T, as ExpressRoute partners. 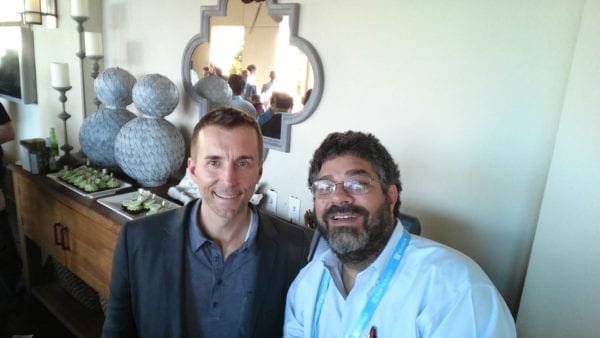 Zig briefly reaffirmed that later this year Office365 will directly offer enterprise voice features, native audio conferencing, and PSTN services. There wasn’t a lot of detail here which will presumably come in May.

He then transitioned to meeting rooms and lamented that the majority of them remain analog in a digital world. He had two remedies at opposite ends of the spectrum. Polycom CEO Peter Leav joined Zig on stage to preview the Roundtable 100. This is not a laptop accessory, but a standalone, palm-sized Lync device that connects to a separate monitor. It is expected to run for about $1,000. This is great news for customers, but I was confused why Mr. Leav was smiling. This co-branded solution will undoubtedly steal sales from Polycom’s CX8000 (about $20k) as well as Poly’s Group Series portfolio.

Zig did an exceptional job of delivering a very difficult keynote. Yes, difficult: the majority of his announcements were already known and all of the demos were of unreleased products. Despite these challenges he still created excitement and buzz. Well done.

While many consider UC a maturing industry, Skype4B is far from done and we are seeing glimpses of an aggressive road map that will be difficult for competitors to emulate. Microsoft is in transition from product-first to cloud-first, and during the transition there will be some confusion and casualties. We already saw some of this when Microsoft entered the businesses of PC hardware, mobile phones, and retailing. Office365 and Skype4B are on track to disrupt portions of the current Lync ecosystem including carriers, providers, and (LRS) partners.